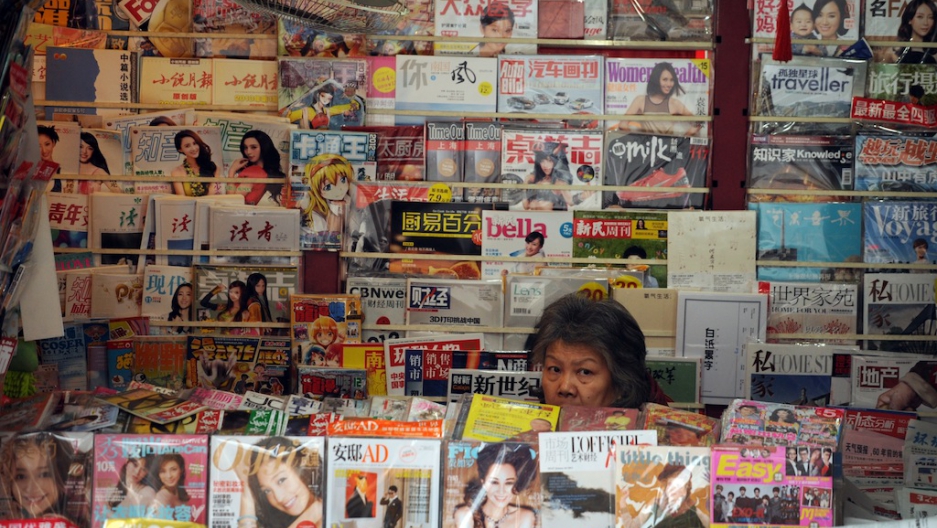 A newspaper vendor looks out from her booth on a street in Shanghai on Jan. 8, 2013.
Credit: PETER PARKS
Share

Many foreign journalists covet a China posting. Reporting on a country as important and fascinating as the Middle Kingdom is the opportunity of a lifetime. But it’s not for the faint-hearted.

In addition to the difficult language and choking pollution, members of the foreign — and domestic — media frequently have to contend with government officials, police and thugs intent on stopping them from doing their jobs, sometimes violently.

And the situation is getting worse.

A survey conducted by the Foreign Correspondents Club of China in May found 98 percent of respondents did not think reporting conditions in China met international standards.

More than two-thirds of the 98 respondents said they believed the conditions had worsened or stayed the same over the previous 12 months.

Only three journalists thought the situation was getting better.

In the last few months of 2013, the Chinese government hardened its attitude toward the foreign media by refusing to issue visas to journalists from Bloomberg and The New York Times, and blocked access to various foreign media websites.

However, in recent weeks Beijing appeared to have a change of heart. Visas were granted again within days of journalists having packed their bags and left the country.

Over the first weekend of January, web users on the mainland were surprised to find the Chinese-language sites of Reuters and The Wall Street Journal had been unblocked.

To understand what’s going on in China, GlobalPost spoke to Paul Mooney, a veteran correspondent who spent 18 years in China and is now working as a freelance journalist in the US after being refused a visa; and Bob Dietz, the Asia program coordinator for the Committee to Protect Journalists.

Why has the Chinese government played hardball with the foreign media in recent months, such as by blocking news websites and refusing visas?

Paul Mooney: There are likely two reasons. One, the Communist Party is extremely upset with the reports by The New York Times and Bloomberg News about the wealth of the families of top leaders Wen Jiabao and Xi Jinping. This is a sensitive topic in China that the Party doesn’t want advertised.

Both stories made it into China via the internet and were widely passed around widely among Chinese people, seriously embarrassing the leadership. Dozens of people were arrested this past year for calling on government leaders to disclose their wealth. Party corruption is a sore point within China.

In addition, other segments of society are fed up with the serious pollution problem, food safety problems, widespread official corruption and other issues. Yet the Party has not taken many concrete steps to deal with these problems, instead only using repression. Protests are increasing as are criticisms via the internet.

Foreign reports on these topics filter back into China to Chinese citizens and are seen around the world, tarnishing the reputation and the image of the Party. Although many believe the Party is too strong to care deeply about its image, it does. So it's using unprecedented methods, such as visa refusals and delays, and stepped up intimidation, to silence these reports.

It’s also important to know that while the pressure on foreign media is increasing, the Xi government has also increased its stranglehold on domestic media and the internet, and both sectors have been significantly muzzled since the new administration came to power a year ago.

Bob Dietz: Actually, the tactics are not all that new, and some of them predate the government of the current president, Xi Jinping. Search our website and you can see the complaints going back for years. But I think the current harder line seems to have started with the expulsion of Melissa Chan and the subsequent closing of the Al Jazeera English bureau in Beijing in May 2012. Chan had been doing reporting critical of the government, particularly around human rights issues, since 2007.

There were a number of other incidents around the time of the popular uprisings in the Middle East and I think the government's attitude toward foreign correspondents changed significantly. I think you have to accept that the retribution directed at The New York Times and Bloomberg is linked directly to their reporting on corrupt practices among the country's political elite.

It's one thing to talk about corruption or bad governance at the village or township level, but it's something completely different to take on the national leadership, and do it convincingly as those organizations did. A reporter does that, and they incur official displeasure for sure.

What is the significance of the recent decision to unblock the Chinese-language websites of Reuters and The Wall Street Journal, and to grant visas to Bloomberg and New York Times journalists?

Paul Mooney: There’s no significance at all in either aspect. Websites get blocked and unblocked with regularity and it’s often difficult to tell if the move is technical or political. During the same week, we have reports that the website of the Guardian has been blocked. The visas for the 23 journalists were approved, possibly with the exception of one journalist from The New York Times, who was transferring his visa from Time Magazine to The New York Times.

I predicted weeks ago that the Chinese would approve the bulk of the visas at the last minute, which is what happened. This was purely a scare tactic to intimidate the foreign media, and make them think twice about reporting on sensitive issues in 2014. This is a practice we’ve seen used increasingly since 2009, following some relaxations adopted for the 2008 Olympics.

The only difference is that this year they targeted an unprecedented number of journalists from two of the largest and most influential international news organizations. Had the government not approved the visas for this group, it would have led to a barrage of bad publicity, and possible retaliation by the American government, and the Chinese government didn’t want to risk the backlash.

I, myself, was refused a visa in November to take up a position with Reuters in Beijing, which is a rare thing for the government to do.

Bob Dietz: Is there a rationale behind these decisions? Almost simultaneous with the unblocking of those websites came the blocking of the Guardian website, for no discernible reason. The paper had always been reliably critical of the government and there were no particularly egregious recent articles to anger the censors, or whoever it is that makes these decisions.

Is there an implication of a time span for banishment until the news organization is allowed to reappear in China? Or is it the use of restricting access as a way of simply flexing the "we can shut you down whenever we want" muscle?

As for visas, it appears at this moment that most if not all the people who were being targeted before Christmas will be getting their visas — most already have been given their press credentials. But others who were booted out earlier are still not allowed to return. The whole incident and all its discomfort for the journalists and their organizations is still hanging in the air. The implication is “we let you off this time, let's see how you do over the next 12 months.”

What is the outlook for domestic and foreign media in China in 2014? Do you see any sign of the Chinese authorities easing control over the media?

Paul Mooney: I not only see no sign of them easing control over the media, but I actually expect to see the controls increase. I predict that the Chinese will step up the harassment of the foreign media this year in an attempt to muzzle reporting on corruption among the top leadership as well as on increasing domestic problems and rising opposition to the Party.

The Chinese government won a small victory when Bloomberg allegedly bowed by censoring a story, and this has given the Communist leadership a taste of blood. The Party will now feel encouraged to continue its pressure under the belief that everyone will eventually bend.

Bob Dietz: I don't think it's going to get better. I think the Xi government feels it can apply the same sort of pressure on the foreign media that it has on its domestic media. They won't throw foreign reporters in jail, as they tend to do with their own press corps, but they will resort to tactics similar to what we've been seeing in the last few years — visa games, website blocking and expulsions if they feel it's necessary.

On the other hand we don't want to see retaliatory visa restrictions aimed at Chinese journalists in the US, or anywhere else for that matter.

Editor's note: These interviews were edited and condensed for clarity.