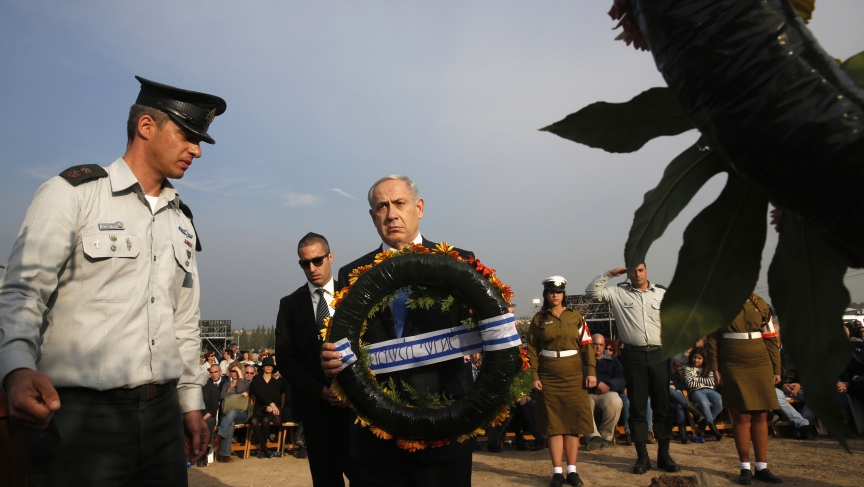 Ariel Sharon was an Israeli commando-turned-politician who earned the nickname "the bulldozer" for his uncompromising tactics on the battlefield and in the halls of political power. But he also stunned many Israelis in 2005, when he evacuated Jews from settlements that Sharon himself helped to thrive.

Sharon was laid to rest on Monday at his family farm in southern Israel. He died over the weekend at age 85, after suffering a stroke eight years ago.

For Palestinians, along with the rest of the Arab world, Sharon is remembered as a war criminal, or worse. The London-based, Arabic language newspaper Al Hayat ran a headline that read, "Sharon 'the butcher' dies." Sharon's military record helps explain why Palestinians despise the former Israeli leader.

But for most Israelis, "Arik" Sharon was first and foremost a war hero.

Speaking at a memorial for the former prime minister in Jerusalem on Monday, Israel's current prime minister, Benjamin Netanyahu, described Sharon as "one of the greatest military commanders the Jewish people have had."

US Vice President Joe Biden also spoke, calling Sharon an "indomitable bulldozer... The security of his people was his unwavering mission."

That mission continued when Sharon entered politics. As a cabinet minister, he helped expand Jewish settlements in the Israeli-occupied territories. He famously — or infamously, depending on one's perspective — told settlers in the West Bank to "grab every hilltop."

According to Jeffrey Goldberg of Bloomberg View, Sharon had a special affinity for the Israelis who settled in the Gaza Strip, "who, in his mind, were rough and resilient pioneers serving as a picket line along Israel’s southern flank." Goldberg wrote that Sharon "had fond memories of fighting terror in Gaza, where he was, for a while, inordinately successful".

Goldberg recalls one conversation where Sharon recounted this story to him: "Once, we captured a Lebanese fishing boat. We filled it with Lebanese food and newspapers and we put our soldiers in it, dressed as Arabs, who spoke Arabic. And they landed on the beach in Gaza, and the Palestinians hid them. They thought they were their people, fugitives. And we were pursuing them ourselves, making believe they were hunted terrorists. The Palestinians took them to meet an important group of terrorists in the northern part of the Gaza district. And when they met them, our soldiers killed them. Then they were evacuated out of Gaza. You have to think of things like that. You have to be creative.”

In 2005, Sharon did something as prime minister that would have been unthinkable only a few years before. He ordered 8,000 Israeli settlers, along with the Israel Defense Forces, to pull out of Gaza. The settlers and their supporters saw it as a betrayal. But Sharon, once again, made the decision out of strategic concerns for Israeli security.

"It was really only a reversal in the superficial sense," Goldberg said in an interview with The World. "[The Gaza disengagement] was of a piece with everything he had done. Nothing in his views of the Palestinians changed, he just thought Israel would be safer."

Back in the 1990s, Sharon was opposed to the US-brokered peace talks that led up to the Oslo Accords. Later, he came to accept the fundamental premise of those diplomatic negotiations — Israel's need to end its rule over over millions of Palestinians who don't have either Israeli citizenship or a state of their own.

The occupation, Sharon eventually concluded, would have to end in order for Israel to realize the Zionist dream of having a state that was both Jewish and democratic.

That realization isn't lost on Israel's current prime minister, according to Goldberg. "I don't think Netanyahu misunderstands this dilemma," he said. "I'm certain that John Kerry, among others, has pounded that reality into his head."

But pulling settlers out of the West Bank, Goldberg explained, would be far more difficult for Netanyahu than it was for Sharon to pull them out of Gaza. For starters, the West Bank — known to Israelis by its Biblical name of Judea and Samaria — is the historic birthplace of Judaism, Goldberg emphasized.

He added that no current Israeli leader, Netanyahu included, possesses the kind of credibility that Sharon had on matters of security. That credibility allowed Sharon to implement his Gaza pull-out plans.

"The real question is," says Goldberg, "is Netanyahu a strong enough leader to pull [something like] that off?"