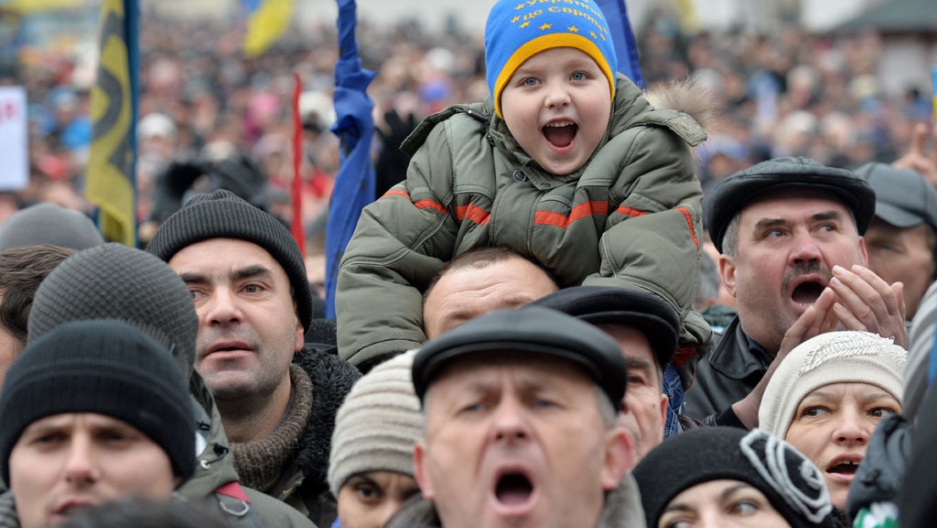 An estimated 50,000 pro-Western Ukrainians massed on Sunday in the heart of Kiev amid swelling anger over the bloody beating of prominent former minister turned opposition leader Yuriy Lutsenko.

The 49-year-old member of jailed ex-premier Yulia Tymoshenko's cabinet was transferred out of intensive care on Saturday evening after being attacked by truncheon-wielding police during a small protest the night before.

"He received about 10 blows to the head," the former interior minister's spokeswoman said. "No one is allowed to see him except for his closest relatives."

Nearly 20 activists were injured when they tried to prevent the police from moving to jail three young men who were sentenced to six years for allegedly plotting to blow up a statue of Soviet founder Lenin in 2011.

It marked the first use of force against a leader of Ukraine's latest wave of pro-Western protests and threatened to reignite the worst political crisis of President Viktor Yanukovych's four-year rule.

The ex-Soviet nation of 46 million that once served as the breadbasket of Europe has been gripped by ceaseless demonstrations ever since Yanukovych in November ditched an historic EU trade deal in favour of tighter ties with old master Russia.

The biggest rallies on Kiev's iconic Independence Square drew hundreds of thousands -- an echo of the 2004 Orange Revolution that first nudged Ukraine on a westward path. The city's main street remains occupied by a tent encampment protected by makeshift barricades to this day.

Protest numbers had begun to recede when Yanukovych brushed aside the havoc in mid-December and struck a $15-billion (11-billion-euro) bailout package with Russia that also slashed the price Ukraine has to pay for natural gas imports on which its teetering economy depends.

But anger at what many saw as the president's personal orders to crack down on his top political foes saw the number of people gathered at the Independence Monument towering over the city's central square swell from 10,000 at the last weekly rally on January 5 to what AFP reporters estimated as a crowd of nearly 50,000 on Sunday afternoon.

"When the police are not afraid to beat up their old boss, this shows that the authorities are trying to frighten those who dare rise against him," said pensioner Anatoliy Radyuk as a freezing winter rain pelted the determined throng.

Call for US sanctions

"We will continue to fight," Klitschko told his cheering supporters from a makeshift stage.

"And in order to be heard, we are going to organise a national strike -- first a short one, as a warning, and then a full-scale one that lasts a long time."

Fellow opposition lawmaker Arseniy Yatsenyuk announced that he would be sending an envoy to a US Senate hearing set for Wednesday during which he will press Washington to impose economic sanctions against "the gang now violating the law and the constitution."

Protest leaders had last month also issued a joint call for the European Union to impose similar punitive measures against Yanukovych and members of his family.

The protest movement had lost much of its steam in previous weeks because of a winter holiday season that stretches in post-Soviet countries from New Year's Eve to Orthodox Christmas -- celebrated according to the Julian Calendar on January 7.

Klitschko said he expected at least 100,000 people to come out for the next mass protest in Kiev on January 19.

The police did not release an immediate estimate of the size of Sunday's crowd.