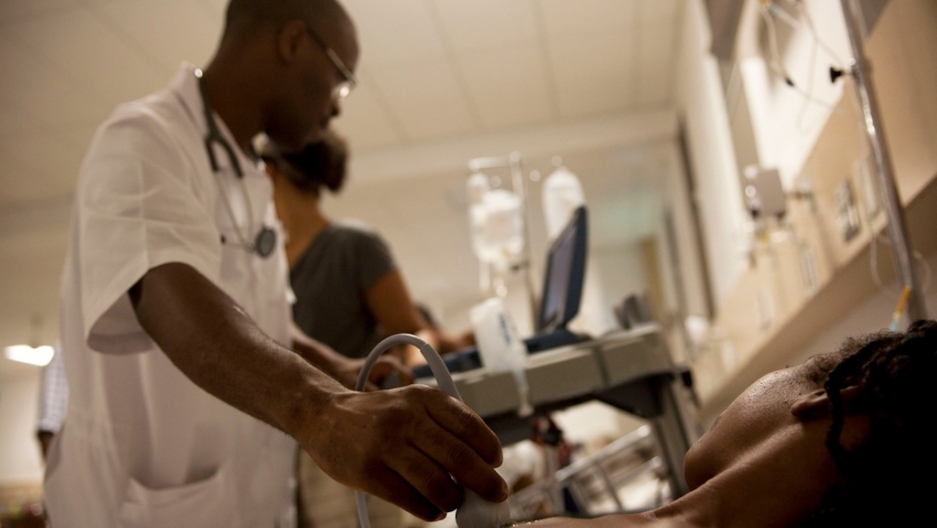 MIREBALAIS, Haiti — When Roosler Billy Telcide completed medical school in Port-au-Prince, his hopes for finding a residency to prepare him for a career as a pediatrician were modest.

“I had a dream when I was a medical student to do my residency where I can find a scanner, an MRI, and all those things Partners in Health has,” said Telcide, 27, in reference to a Boston nonprofit whose state-of-the-art teaching hospital opened last year in the town of Mirebalais, north of Port-au-Prince.

Funded by private donors and grants, and using equipment donated from the Boston area, the $25-million, 300-bed University Hospital of Mirebalais (HUM) already handles some 800 outpatient visits a day, offers chemotherapy to cancer patients, delivers 200 to 300 babies per month and operates a 24-hour emergency ward. Its mission: provide free, first-rate health care to Haitians who could otherwise not afford it.

But the hospital is going even further by developing a robust medical residency program with the goal of raising the bar for medical care across Haiti. The first 14 pediatricians, surgeons and internal medicine specialists have already begun the program and the hospital intends to increase the number of residents each year and create additional residencies in other medical fields as well as nursing.

Growing up with a nurse for a mother, Telcide spent most of his childhood in hospitals in Haiti. They were nothing like the new hospital here in Mirebalais. He said he’s learning something that most Haitian doctors never do: how to form close relationships with their patients, a rarity in Haiti, where clinics and hospitals are understaffed and overcrowded.

“They teach us how to be leaders, which often don’t exist in these communities. How to speak with parents and involve them and their children,” said Telcide, who is several months into his three-year residency. “It’s not just, ‘write you a prescription and leave.’ All the kids in there, I know their age, where they are from, what they eat every day, and the names of their family members. You'd never find that anywhere else.”

On a recent visit to the hospital, a woman who just gave birth to a baby girl recalled how different that experience was from the last time she gave birth — to a baby boy in a hospital in Santo Domingo in neighboring Dominican Republic. Yverose Baptiste, 35, said the Dominican doctors performed a cesarean without communicating with her verbally, since she didn’t speak Spanish and they didn’t speak Haitian Creole.

With a note of pride in her voice, Baptiste said it was a relief to deliver her baby in a place with such a friendly, caring medical staff — and in her own country, nonetheless.

“Compared with other hospitals here they give great service,” said Baptiste. “They don’t neglect you at all. As soon as I arrived here, they were helping me.”

Best of all, said Baptiste, she didn’t have to pay a single gourde, the Haitian currency.

While health care is technically free at public hospitals in Haiti, patients are still required to pay for all the equipment used and medications prescribed, even basic things like gloves and gauze, said Michelle Morse, who directed the medical residency program at HUM as it began. Morse surveyed most of the 29 existing residency programs in Haiti’s seven teaching hospitals to ask doctors what sorts of residencies were missing.

“One of the most surprising things is how there’s just not enough financing to make these programs work,” Morse said.

“In the US, the government and Medicare subsidize teaching hospitals at about $100,000 a year per resident.” In contrast, Morse says that in Haiti, the families of the medical resident usually have to fit most of the bill to support young doctors through their residencies.

Worse yet, Haiti has only 150 residency openings for the roughly 400 Haitians who graduate from medical school and enter the workforce in Haiti each year.

Many doctors lament that the United States funds only 104,000 residencies at US teaching hospitals, the equivalent of 33 medical residencies for every 100,000 Americans, according to the Wall Street Journal.

In Haiti, the number works out to approximately seven per 100,000. Haiti has only 25 physicians per 100,000 people, compared with 242 in the United States, according to the World Health Organization.

The Mirebalais teaching hospital represents a departure from the idea that, in developing countries, medical attention should focus almost exclusively on basic medical care or to combat only the most severe ailments so that every dollar goes as far as possible. Indeed, GiveWell, the independent charity-monitoring organization, reported the medical work of Partners in Health is less cost-effective than that of other leading charities.

Partners in Health co-founder and Harvard Medical School Professor Dr. Paul Farmer addressed such criticisms in an article last month, writing, “Some in the development world have dismissed teaching hospitals, such as those that provide care for AIDS or cancer, as not cost-effective, nor sustainable, nor a wise use of scarce resources. But the Mirebalais University Hospital is now up and running because a lot of builders and supporters in Haiti, Boston, and across the United States and other countries rejected these low-ball aspirations.”

Haiti’s government, too, is behind the idea, extending funding for hospital operations at $8.2 million (about three-quarters of its operating budget for one year).

“For the Ministry of Health to be buying into this hospital and supporting it financially shows how committed the ministry is to high-quality care and high-quality training,” Morse said.

Partners in Health hopes the residency program will help keep some of Haiti’s brightest doctors here in Haiti rather than move to better-paying jobs in the United States and elsewhere.

“A staggering 80 percent of all physicians trained in Haiti leave within five years of graduation to practice abroad,” according to a recent article by Partners in Health.

Telcide, the pediatrician in residency, said he and his fellow doctors intend to stay in Haiti to spread the high standards of care they’re learning at HUM back to their home towns and cities.

“They have tons of doctors in the US but so few in Haiti,” Telcide said. “After my residency I will go back to my city, Gonaives.”

Partners in Health has long invested in residency programs in Haiti, creating new residencies in family medicine and continuing education for nurses in 2011 and 2012 at a hospital in St. Marc. Partners in Health, which also works in Rwanda and elsewhere, received $96 million in revenue in 2012. A spokeswoman said the organization’s budget for fiscal year 2013 is $84 million, about $35 million of which is earmarked to Haiti.