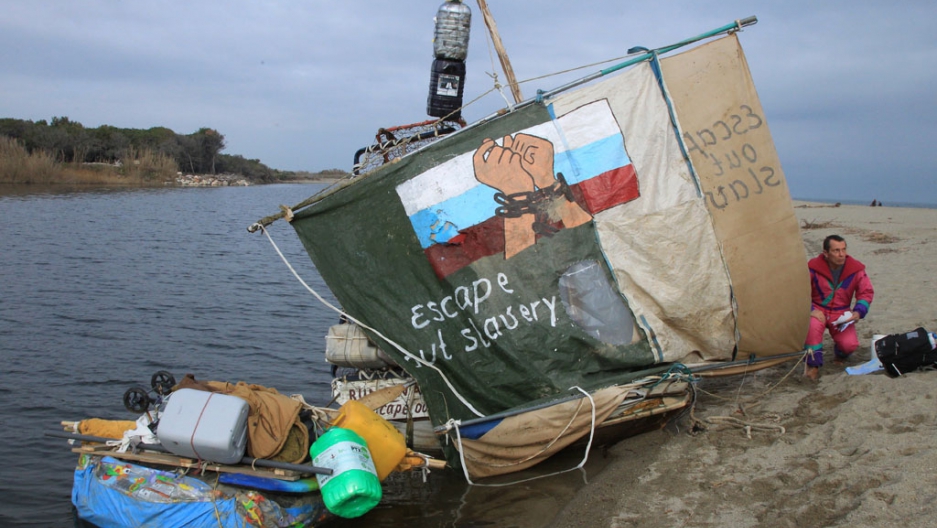 Russian journalist Andrey Novoselov, fearing persecutions from President Vladimir Putin's regime, sits next to his raft on January 11, 2014, near Canet-en-Roussillon, France. Police prevented him from sailing to Spain and the United States in search of political asylum.
Credit: RAYMOND ROIG
Share

French police Saturday arrested a Russian journalist only a few hundred metres (yards) into a doomed bid to sail across the Atlantic on a rickety homemade raft.

Authorities picked up Andrei Novoselov in southwest France as he attempted to navigate his unseaworthy vessel up the Tet river to the Mediterranean Sea.

Novoselov's plan was to head for the United States, via Spain, after his application for asylum in France had been refused.

Before taking to the waves, he had told a handful of reporters he wanted political asylum in France or the United States as he feared his life would be in danger if he returned to Russia.

According to local paper L'Independant, this was Novoselov's second effort at escaping on a makeshift contraption.

His previous attempt, in August, also ended in an arrest, and he was ordered to leave France.