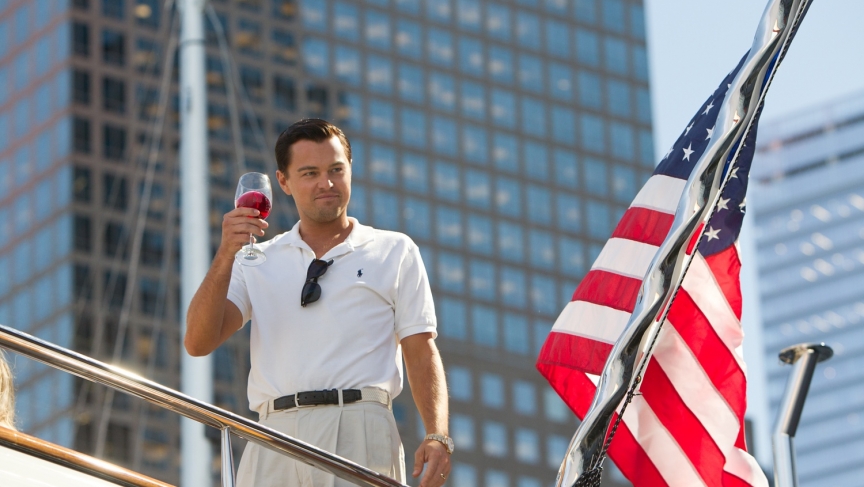 Leonardo DiCaprio stars in The Wolf of Wall Street.

Leonardo DiCaprio and Martin Scorsese swing for the fences in the The Wolf of Wall Street.

The pair’s fifth collaboration features more sex, drugs and profanity than their previous efforts combined. It may even be a record-breaker in that regard.

“We looked at this like the Roman Empire,” DiCaprio says. “Short of virgin maidens feeding us grapes, we put everything we possibly could in this movie.”

While the film has taken some heat for glorifying the excesses that helped cause the market’s collapse, DiCaprio says the envelope-pushing is meant to expose the phenomenal greed and indulgence of Jordan Belfort and his cohorts — real-life stock brokers who made millions ripping off clueless investors in the 1980s and 90s.

“Guys in Long Island trying to be the fat cats on Wall Street, who were simultaneously destroying our economy,” DiCaprio says of the characters. “It represented something in our culture, this attitude of gaining wealth at any cost and feeding into every carnal desire you possibly can.”

The actor has become something of an expert in playing rapacious, villainous types — from the unforgivable slave-holder in Django Unchained to the reckless title character of The Great Gatsby.

“With the Great Gatsby, and Django and this film, it was like a trilogy of corruption in America through different time periods,” he says. “It probably stems from having a poor upbringing in Los Angeles and being accepted into a school where I got to go see how the other half lived.”

DiCaprio says he’s been fascinated with the pursuit of wealth ever since — even more so now that he belongs to the privileged set.

“The films that have impacted me the most in my life — everything from East of Eden to Taxi Driver — are films with characters that are somewhat tortured,” he says. “That’s what affected me as a 15-year-old kid. That’s what moved me and made me want to do movies.

“I think Marty’s films have always been about the pursuit of the American Dream, in a lot of ways, the corruption of that dream, and the hustle it takes to get there.”