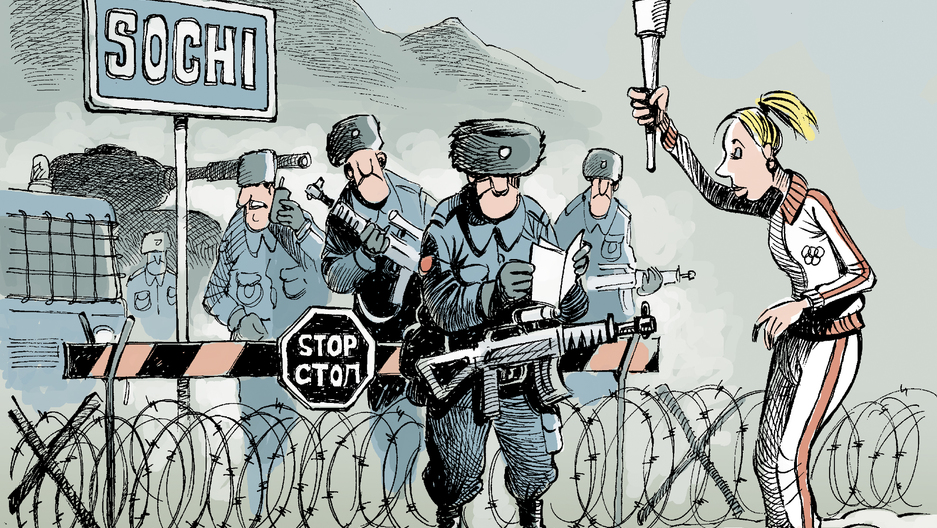 The Sochi Olympics are just a few weeks away. The venues are ready, the security is tighter than ever and there's even snow — something that, surprisingly, wasn't a certainty for a winter Olympics venue.

Now, all that's needed are the athletes and crowds of spectators. PRI's The World reports on the new Olympic events being added to the games this year to appeal to a younger audience. Among them: slopestyle and women's ski jump — even team figure skating.

Iceland's whale-flavored ale is brewed in honor of Thor

Iceland is one of the few countries in the world that still hunts fin and minke whales — despite a global moratorium on doing so. Now, a company providing whale meat has branched into a new area — whale beer.

The Atlantic reveals that this new beer is made using whale meal, a byproduct of processing whale meat. The beer isn't planned to be a regular feature on store shelves, but rather a limited release for the country's Thorrablot festival this month. Thorrablot celebrations for the Norse god Thor date back to the Vikings. And odd culinary "delicacies" are part of the tradition, like the potent Schnapps known as "Black Death."

Watch what you bet when you are drunk

Most people would agree it’s honorable to keep your promises — but it appears two men in remote Siberia have paid a high price for doing so. They each cut off an ear as a forfeit after losing a drunken arm-wrestling match.

Right now, police are investigating whether self-mutilation constitutes a crime. The rules of the contest stated the loser had to cut off an ear. When neither won, they both lost. The Daily Telegraph has the full details.

If you had logged onto Google Maps to find your way around Berlin Thursday, you might have seen an unfortunate blast from the past. The site briefly renamed a central square in the German capital with the name it held from 1933 to 1945: Adolf Hitler Platz.

Der Spiegel International reports that the Berlin's Theodor-Heuss-Platz, in the western Charlottenburg district, was renamed for a brief period by Google — though Google can't explain why. Theodor Heuss was the first federal president of Germany. His name was added to the square in 1963, when it was renamed from Reichskanzlerplatz.

Please: no liquids, sharp objects or pig-nosed turtles on board the aircraft

It’s thought members of the vulnerable species were destined for China and Singapore, where they may become pets — or dinner. Physics.org reports that at least 14 of the turtles had already died before reaching Jakarta. The surviving turtles will be returned to their natural habitat.

You may never think of your plants in the same way again ...

Your plants can hear, learn and even remember things. Those are the findings from stunning new research out of the field of plant neurobiology.

Of course, plants don't have neurons, or brains for that matter. But they have more senses than people and they can process all that sense information to learn when to react and ignore things in their environment. Science Friday talked with author Michael Pollan about the experiments, and there's a video of plants doing very purposeful things. So give that ficus a little more respect.

Europe was hit was major storms earlier this week, with an unexpected side effect. Reuters reports that the storms led to increased effectivness of wind turbines, and the rains led to increased hydroelectric power — both renewable energy sources are popular in parts of Europe. But power companies aren't benefiting. With all that energy available, the price of it dropped below the cost to make it. And consumers probably won't get much benefit, either — much of their bills are fees and charges geared toward improving the renewable energy environment.