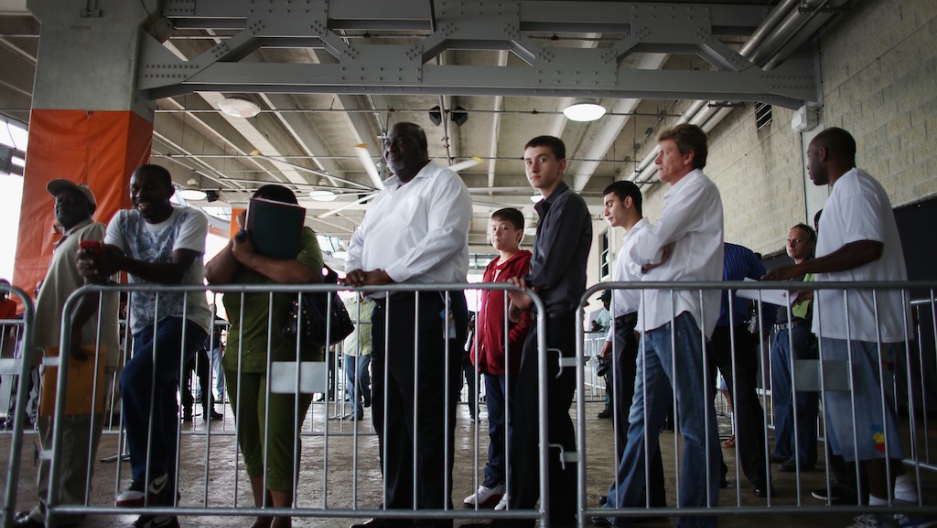 People looking for work stand in line to apply for a job during a job fair at the Miami Dolphins Sun Life stadium on May 2, 2013 in Miami, Florida.
Credit: Joe Raedle
Share

NEW YORK — Election years have a way of focusing the mind, particularly in Washington.

With the US midterm congressional elections looming in November, the US Congress is wrestling with a new reality of American politics — anger about income inequality at a time when more members of Congress are millionaires than at any previous point in the country's history.

This is shaking the determination by Republicans in the US House of Representatives not to extend long-term unemployment benefits to jobless Americans that have kept 5 million people afloat since the 2008-2009 financial crisis.

That 5 million, representing about a third of the 11 million workers now jobless in America, would be transformed into desperate wages seekers once those benefits disappear — a “deflationary army” that economists believe will put enormous downward pressure on American wages at a time when income inequality is already at historic highs.

The emergency “long-term” benefits that Congress has extended regularly since the start of the global financial crisis are meant to cover people who have failed to find employment within a year of losing their job, roughly the time when state and federal jobless benefits would normally expire.

By now in past recessions, jobless rates would have long ago fallen back to previous levels and the job market would have recovered. But this has been no ordinary downturn. And taking the steps to declare “mission accomplished” on joblessness clearly has some Republicans uncomfortable.

The Senate narrowly approved extension of the jobless benefits on Tuesday with the help of six Republican votes. Such party line crossing has been rare of late, but in the Senate, where Democrats hold a slight majority and where longer terms of office (six years as opposed to two) give members more ability to weather the complaints of “the base” and such things are a bit easier.

But prospects in the House appear dim. All 435 members face reelection this year, and many of the Republican majority fear that any break with conservative economic dogma could manifest itself as a Tea Party primary election challenge.

Explaining their opposition to extending the benefits, Republicans there say the $25 billion cost of the extension over the next two years is too much to bear.

Some oppose the extension on its face while others, including House Speaker John Boehner (R-Ohio), say they would consider it if Democrats offered up an equal sum of cuts to other programs to offset the spending.

But that stand is taking a lot of fire, both on political and economic grounds. And Democrats, sensing a winning issue, are giving no ground.

For one thing, the economics appears to support their argument.

The Congressional Budget Office, a non-partisan arm of Congress, released a report last month noting that the failure to approve the benefits could trim as much as 20 percent from US economic growth in 2014. Put plainly, in exchange for saving $12.5 billion in federal spending during 2014, the CBO is saying that nearly $90 billion in economic activity would evaporate.

The amplified effects jobless benefits have on the economy are well documented. As with any government stimulus, money given to the poor has a far greater short-term effect on growth because those funds are pumped right back into the economy in through purchases of housing, food or other sustenance rather than saved or spent on imported luxury items.

In the Senate, the logic of Rand Paul (R-Kentucky), a libertarian with presidential ambitions, that jobless benefits disincentivize job searches failed to prevent six of his GOP colleagues from voting with the Democratic majority. Unemployment insurance, he said this week, “does provide some disincentive to work.”
But even in the House, few are lining up to make that case in the public spotlight.

In part, this reflects the growing sense among middle class Americans — reflected in recent polling and being increasingly expressed at the town hall meetings members of congress organize during their visits to the home district — that their personal fortunes have somehow come unhinged from the performance of the US economy.

In a particularly brutal example, Internal Revenue Service and Labor Department data indicates that 95 percent of the pre-tax income gains accrued in the United States since the recovery began in late 2009 have gone to the top 1 percent of US households.

Thus do polls like one taken by Bloomberg News in mid-December produce results like this: 64 percent of Americans say the US no longer offers people the same chance of getting ahead in spite of their station at birth.

The US is emerging from a year in which the growth of US household income inequality resumed its decades-long expansion (after a brief pause caused by the financial crisis), economic fairness has pushed into the front of the American political debate for the first time since Lyndon Johnson’s administration and his War on Poverty which began 50 years ago.