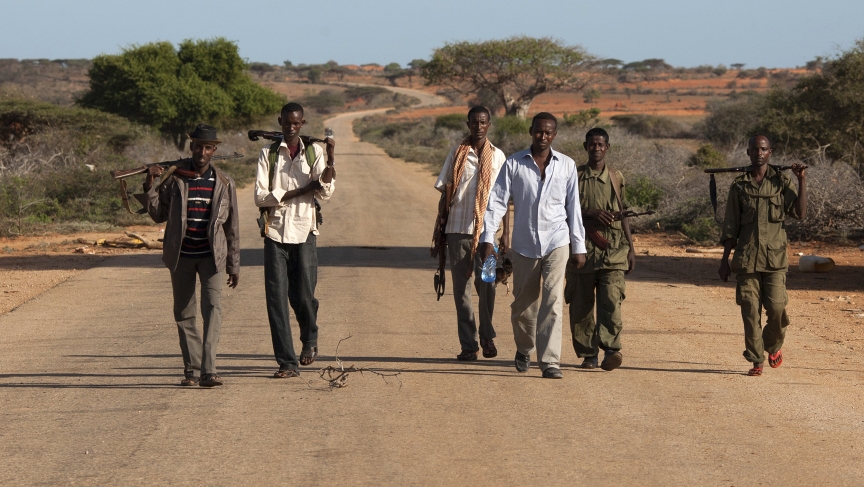 Members of the Ras Kamboni brigade, a militia group in Somalia, walk outside the perimeter of the Kismayu airport on November 11, 2013. Many Somali youths end up in militias or with terrorist groups because they can't find work.

Mohamed Ali is a young Somali American with a mission to help youth in Somalia steer clear of extremist groups.

Ali was born in Mogadishu, but when he was 10, as Somalia was grappling with a civil war, he and his family left for Canada. They finally settled in the US.

Ali attended Ohio State University and eventually became a lawyer, practicing immigration law. He says it was on a trip to Rome that the idea of going back to Somalia entered his mind. He met with a group of immigrants who had left Somalia for Europe.

"I had left the country because of civil war, but speaking to those men, I found out that they had left because they had no opportunities," he recalls.

He tells a story that's familiar to many youth in Somalia: A young man decides to leave his village because of drought, unemployment or famine and heads to Mogadishu in search of opportunity. And he gets stuck in the city's outskirts, where there are no opportunities. This is what Ali calls "wait-hood."

Then, one day, he's approached by a group that gives him food, clothing and money. Slowly, the young man is brainwashed into believing an ideology. A few months later, the man is wearing a suicide vest.

Ali says this process all begins with "wait-hood".

So Ali set up the Iftin foundation to help youth find employment opportunities and start their own businesses.

One success story, he says, was when a young Somali came up with the idea to start a dry cleaning business. Until last year, if you wanted to get a suit dry-cleaned, you would have to get on a flight to Nairobi. There were no dry cleaning services in Mogadishu.

"You would often see government officials or businessmen on their flights out of Mogadishu having this huge bag of dry cleaning," he says.

If you didn't have the $500 for the flight, you would just go without a clean suit.

But the young man started a dry cleaning business and Ali's initiative involved the business in its training program later on.*

"This simple service had a really amazing impact. People who would normally not be wearing suits, started wearing them," he says. "There's something special about wearing a freshly-pressed suit that makes you stand up a bit taller."

Ali describes other successful small businesses: one man started a motorbike taxi business, another young woman set up her own fruit stand in the market.

Ali says he knows fighting terrorism is complicated and requires the help of the Somali government to have a bigger impact. But by helping the youth find opportunities, he says he's taking small steps toward ending terrorism.

"We hear stories of famine, of violence and piracy about Somalia. I want to show the world that there is a different side, that there are innovative young people who have amazing ideas and they just need support," he says.

* UPDATED: A previous version of this post stated that the Iftin Foundation helped start the dry cleaning business where in fact the business was a start up that the Foundation involved in its training program later on. We regret the error.