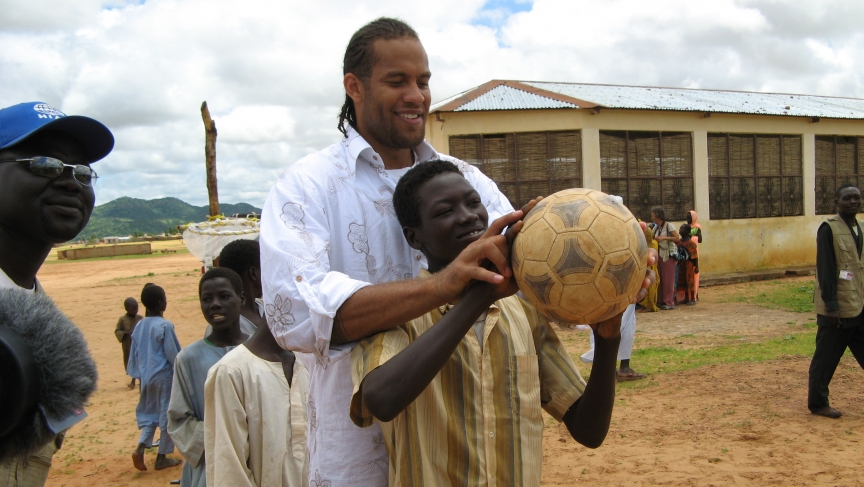 Former NBA player Ira Newble at a refugee camp on the Chad/Sudan border.

Dennis Rodman's controversial and bizarre foray into diplomacy made headlines this week.

Harvard Professor Nicholas Burns criticized the former NBA player for going to North Korea to essentially embrace a brutal dictator. Rodman certainly isn't the first athlete to take a political stance, or even the first NBA player to do so.

Several years ago, the 6'7'' NBA power forward Ira Newble entered into a big stakes geopolitical debate over the Darfur and Sudan conflict. Newble joined other activists, like Mia Farrow, to try and pressure China to take a more constructive role to help end that conflict.

He says it was a humbling experience for him to visit a refugee camp on the Chad/Sudan border.

"I went there to try and get a pulse and try to understand what was going on," he says. "I read in a newspaper that 400,000 people were murdered and about 2.5 million were displaced. And when I started speaking about it, I felt like I needed to go there and actually see what was going on."

He did just that. He says boosting his paycheck or polishing his image wasn't the idea. The idea was to help.

He ended up co-authoring a letter to the President of China. The letter arrived as the nation was preparing for the 2008 Summer Olympics. Newble is not an all-star. He's an average NBA player, a journeyman.

"But because of business relationships with China and the NBA, and China and Nike, it blew up into something I didn't think it would," he says.

Newble doesn’t have any regrets, though.

"At the end of the day," he says, "I did get support from the majority of the NBA and what it did is [it] brought awareness."

It's a far cry from singing Happy Birthday to the brutal dictator of a rogue nuclear state as Dennis Rodman did this week. Newble had stern words for Rodman and the other retired NBA players who participated in the trip. He says he lost respect for Rodman, as he saw him cozying up to a tyrant.

Newble hasn't spoken up much about Darfur lately, or visited. He's busy with his life in Detroit. He's coaching, repairing a torn tendon and moving into post-NBA life.

But he recalls his effort fondly. He doesn't second-guess his decision to use his platform as a professional athlete to highlight the Sudan conflict.

"It made me understand that there's a lot going on in this world that people don't know about, a lot of pain, suffering, and all [the refugees] wanted was some hope and anybody, somebody to help them. And that's what I did."