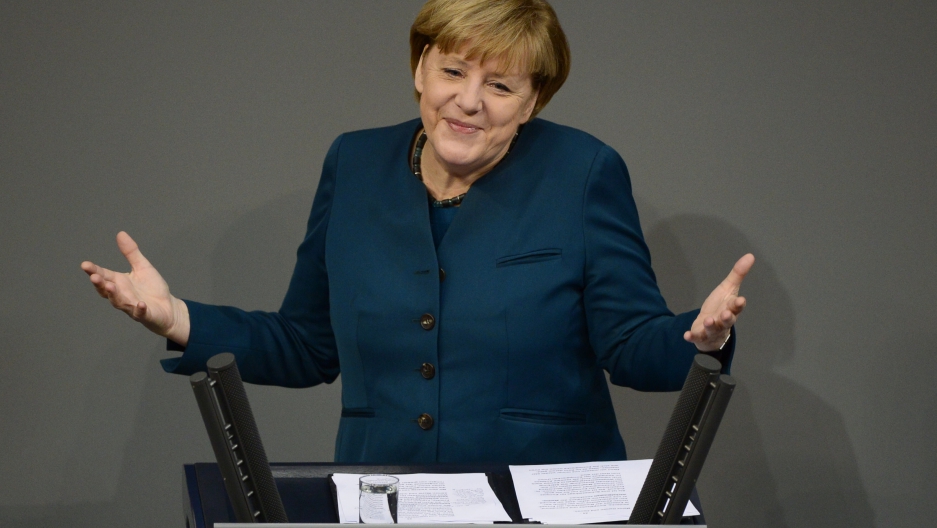 BERLIN, Germany — Angela Merkel's fractured hip may be the least of her worries.

The German chancellor’s holiday skiing accident has stuck her with as much as three weeks of bed rest.

But a spat between her conservative and liberal allies that’s threatening to derail her “grand coalition” before it even gets rolling is surely more troubling.

Immigration has been the first flash point.

Bulgarians and Romanians gained the right to settle freely in Germany from Jan. 1, when they finally received the full rights of mobility granted by their countries’ accession to the European Union in 2007.

Even before the new laws came into effect, however, some of Merkel's conservative allies were already stealing a march on their left-leaning coalition partners.

Stoking fears about a wave of “welfare tourists,” the Bavarian leader Horst Seehofer called for new laws that would limit migrants' rights to social benefits, which aren’t guaranteed under EU rules.

The proposal strikes at one of the EU’s founding principles: equality for its citizens.

Experts believe it may be the opening salvo in a battle over the coalition’s future direction.

“This is a political game and a reaction to feelings in the parts of the population,” says Klaus Zimmerman, director of the Institute for the Study of Labor at the University of Bonn. “And also a game between the parties of the new government, who seek to find their roles and positions.”

In fact, Germany needs more immigrants, having achieved record levels of employment in 2013, when the economy created some 232,000 jobs despite the euro crisis.

With one of the EU's lowest birth rates, the population is aging and shrinking.

There's already a shortage of skilled laborers. While the rest of Europe suffers lingering record unemployment, some German cities are seeing jobless rates dip below 5 percent.

Earlier this year, Merkel warned that the working population could fall by as many as 6 million people by 2030, with the result that Britain could surpass Germany as Europe's largest economy.

Immigration would help address the problem, not only by providing skilled labor but also helping maintain the low wage levels that have provided the foundation for Germany's economic revival since the 1990s.

That may help explain why Merkel held out for a coalition with her social democratic rivals after the country’s elections in September, instead of cobbling together a minority government with the CSU, says James W. Davis of Switzerland's University of St. Gallen.

If she'd opted for a minority government, she'd have been hostage to Seehofer's demands even though the CSU holds merely 45 seats in the 631-member parliament. By forming a “grand coalition” with the center-left Social Democratic Party, or SPD, however, she can play its members against the conservatives in order to advance her more moderate agenda.

“Having a 'crazy man' rocking the boat gives Merkel the cover she needs to resist further compromises,” he says.

But Seehofer’s calls for a clampdown on “welfare tourists,” a toll on foreigners who drive on the autobahn, and other such measures may cause broader problems.

As right-wing extremism grows across the EU, the CSU's populism may help advance the cause of extremists inside Germany, too, says Andreas Pott, director of the Institute for Migration Research and Intercultural Studies at Osnabrueck University.

More from GlobalPost: Not funny in France

To stop the new anti-euro Alternative for Germany Party from stealing its conservative voters, for example, the CSU recently adopted slogans such as “Fraudsters will be chucked out” that normalize xenophobic stances previously held only by the extremist National Democratic Party, he says.

In Britain, such anti-immigrant sentiment is fueling the popularity of right-wing parties that are widely believed to have prompted Prime Minister David Cameron to announce a referendum on leaving the EU and restrict migrants' access to social benefits.

“Germany is neither anti-migrant nor racist,” Zimmerman says. “But the public is misused by political strategists who use the topic for political games, as we’ve seen in the United Kingdom.”