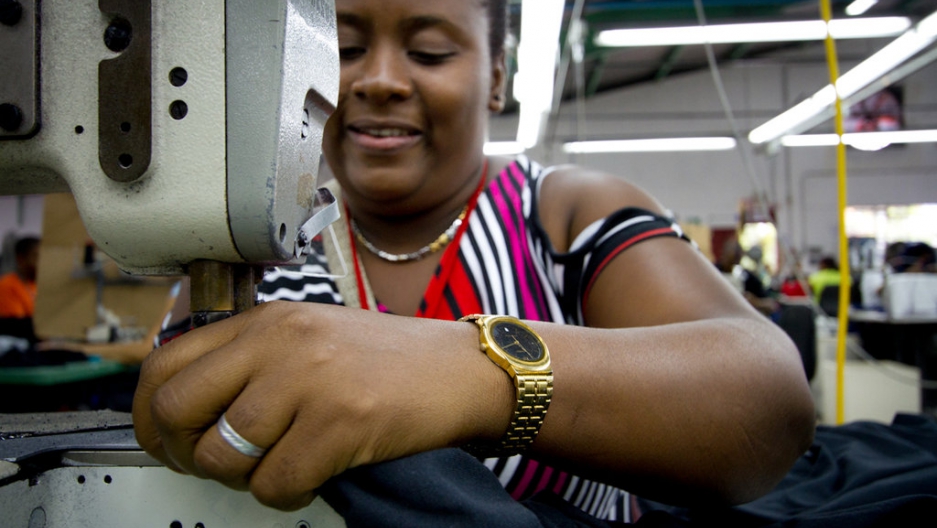 VILLA ALTAGRACIA, Dominican Republic — On a recent Sunday morning, four workers sip coffee with sugar as they share stories of injuries at the clothing factories where they’ve worked.

Carlos, who asked his real name be withheld to avoid possible repercussions from his company, recounts the accident that hospitalized him just two weeks after he began packaging baseball caps at a Santiago factory in 2012. As he left work one day, a woman who was learning how to drive ran him over in the street.

He says the weight of the vehicle crushed his clavicle and shoulder and made deep lesions on his right thigh and stomach. He spent nearly three months lying on his back in a hospital, staring up at the ceiling, hardly able to move. It took a year of recovery before he was able return to work.

But Carlos says the larger injustice was what happened next, when he asked the company for worker’s compensation, which Dominican law guarantees to all workers who qualify for up to five years.

“I never recovered a peso from the company for the medicine or treatment or anything,” he said. Some of his fellow coworkers pooled together 1,600 pesos, about $40 US — barely enough to cover the cost of pain medication for one day.

Sitting across from him today in Villa Altagracia, Pablo Tolentino shakes his head. “In our union, it would have been very different.”

Tolentino is one of 129 workers at a clothing factory unlike any other in the Dominican Republic. Founded in 2010 by the collegiate clothing supplier Knights Apparel Inc., Altagracia Apparel pays its workers a so-called living wage, calculated to be about three times the country’s minimum wage for factories in its free trade zones

Altagracia workers earn at least $500 US per month, well above the minimum wage of about $150.

More from GlobalPost: The Cambodians who stitch your clothes risk everything for a liveable wage

The living wage takes into account what a worker really needs to earn to be able to afford the true cost of living, for food, housing, education. Even beyond the salary, Altagracia workers get health insurance, a pension and vacation days. They sit in ergonomic chairs and drink water they themselves have quality-tested for pathogens.

Four years since Altagracia opened its doors, the factory has become a model of what workers in the Dominican Republic dream to achieve. Approximately 10 percent of the Dominican workforce is employed in manufacturing, according to a January 2013 report by the International Labor Organization.

Last year the Dominican Republic exported $1.3 billion worth of textiles and other goods from its free trade zones. Nearly 26 percent of the Dominican Republic’s total exports were clothes or other textiles made at the 80 or so clothing factories that operate there. The largest portion of the country’s clothing exports go to the United States.

Dominican law guarantees the right of association, but only an estimated 11 percent of the workforce is unionized. Due to internal disorganization or opposition from companies, many unions struggle to enact real change for their members.

“We all went to help, to the hospital. More than 20 workers left our work,” Vargas says. “Then we arrived at the factory and immediately started on the documentation to send to the ARL,” she says, referring to the Dominican ministry of labor risk and social security.

One of the two women in the motorcycle accident broke her leg and knee in the crash and had to undergo physical therapy for an entire year before she could return to her job sewing T-shirts. The union and the company worked together to ensure nearly all her medical bills and most of her salary was paid by the ARL through disability.

All this was news to Carlos. He explains how, after recovering from the car accident, he reapplied to the factory and made no further attempts to make JoeAnne Dominicana reimburse him for his medical bills or even file a claim, as required by law, with the ARL. (A company representative did not respond to inquires by GlobalPost).

“Few people get this opportunity to work for a company,” Carlos says. “I needed to ensure my job, so I decided not to file any claim.”

“It might not be too late,” says Tolentino who went on to explain the legal processes workers can pursue after an injury — all things he’s learned working with Altagracia’s unusually strong union.

“But the fight doesn’t end with Altagracia,” Tolentino says. “We have to help other workers achieve the same.”

Indeed, workers from Villa Altagracia are now fanning out across the Dominican Republic, inspiring employees at other factories to follow the precedent set by Altagracia. Among them is Reynaldo Corporán, 34, who now organizes unions in the free trade zones in the city of Santiago where JoeAnne Dominicana operates.

Back in the early 2000s, Corporán was one of approximately 3,500 workers at a Korean hat factory called BJ&B, which was located where Altagracia Apparel operates today.

“Accidents were very common. Workers cut their hands often with the machines. They also had vertebrae problems because there weren’t comfortable seats,” said Corporán. “I knew a girl whose hair got into one of the motors that moved the machine. She lost most of her hair and part of her scalp.”

When Corporán and some of his co-workers began forming a union with the hopes of negotiating a higher wage and better safety precautions, he said BJ&B lashed back:

“They said not only were they going to fire those involved at the union, but that they would close the factory,” said Corporán. “And this isn't a community with a lot of work.”

Eventually the company did move its production to Bangladesh, laying off all of its Dominican employees. In the meantime, Corporán, Vargas and others began talking with the Workers Rights Consortium, which monitors labor rights in factories that produce apparel for US universities. That led them to Knights Apparel Inc., which eventually opened Altagracia Apparel that hired more than 100 of the former employees of BJ&B.

Corporán says Altagracia has set a precedent for workers around the country, who are increasingly organizing to demand higher pay and better conditions, often citing Altagracia as a model as they attempt to replicate its legacy.

“Altagracia is a theme of much interest for the workers, but not for the international brands. They see Altagracia example as a threat,” Corporán said. “They say, if these guys can demonstrate they can pay a decent salary, it's insidious that we don’t get that as well.”