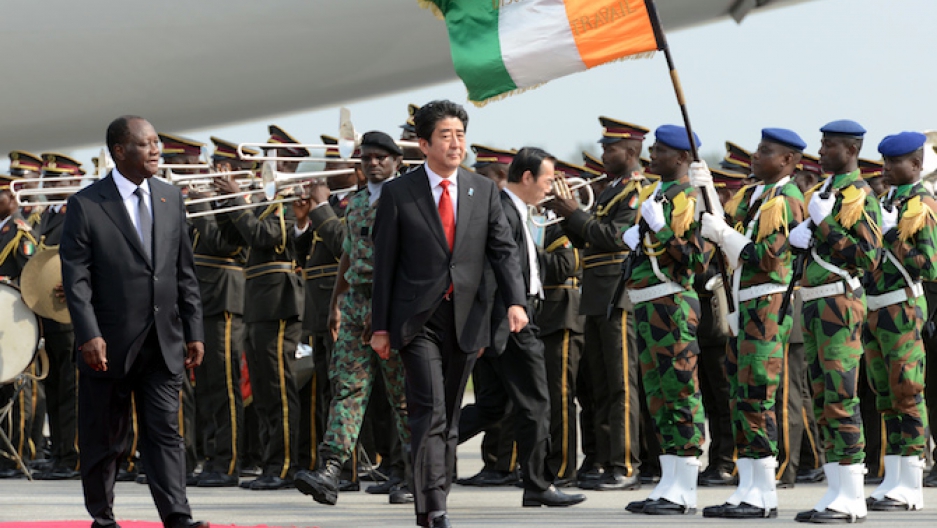 JOHANNESBURG, South Africa — When Shinzo Abe arrived in Ivory Coast on Friday for his first stop on a three-nation tour of Africa, the Japanese prime minister began a daunting mission: prove that China isn’t the only East Asian power player on the continent.

But Japan in Africa? Outward signs of a Japanese presence have been mostly limited to imported used cars along with some sushi restaurants, most of which are also Chinese-run.

Abe’s mission as the first Japanese prime minister to visit Africa since 2006 is a difficult one. It comes amid regional tensions back home over competing claims to uninhabited islands in the East China Sea along with Abe’s recent visit to the controversial Yasukuni Shrine, which commemorates Japan’s war dead including convicted war criminals.

The ongoing diplomatic spat has rather bizarrely led to both Chinese and Japanese officials comparing each other’s countries to Lord Voldemort, the "Harry Potter" villain. Writing in The Telegraph, China's ambassador to the United Kingdom called the Yasukuni Shrine “a kind of horcrux, representing the darkest parts of that nation's soul” — a geeky wizard reference. Japan's ambassador responded that China risks playing “the role of Voldemort” by escalating regional tensions.

And sure, maybe it’s just a coincidence, but Abe’s tour of Ivory Coast, Mozambique and Ethiopia comes at the same time as the Chinese foreign minister, Wang Yi, is on a six-day visit to Ethiopia, Djibouti, Ghana and Senegal.

Hua noted that Chinese foreign ministers have a longstanding tradition of visiting Africa on their first overseas visit of every new year.

“However, if there is any country out there that attempts to make use of Africa for rivalry, the country is making a wrong decision which is doomed to fail,” she said.

A senior aide to Abe tried to downplay any rivalry, telling the Associated Press that African countries “are important regardless of China.”

Experts say Japan’s approach to engaging with Africa has been far more subtle than China’s.

Howard Lehman, a University of Utah political science professor and editor of a book about Japanese aid in Africa, says that while China has been criticized for neocolonialism, Japan’s aid strategy emphasizes partnerships, in which African countries take ownership of investment and aid projects.

“What China has done is build the large soccer stadiums and airports — the splashy ones that people see and use,” he says. “Japan has not done that. They've taken the view of trying to work with people at a more local level.”

Although Japan has been engaged in Africa for decades, Lehman adds, it has fallen behind in recent years as the Japanese economy faltered and China embarked on a major expansion.

“Japan doesn’t have the resources China has. What Japan has are that the values that come with the resources — these are values that fit within the African context,” he says. That's particularly visible in Japan’s approach to development on the continent.

Twenty years ago, Japan launched the Tokyo International Conference on African Development, held every five years to bring together African and international leaders for debate on foreign aid and development.

At the most recent conference, attended by some 40 African leaders in June, Abe pledged $32 billion in public- and private-sector support over the next five years. That includes $14 billion in official development aid to be distributed during the prime minister’s Africa trip.

Abe is travelling with a few dozen business leaders, and will also aim to secure much-needed energy resources for Japan during the trip.

Their first stop is the French-speaking Ivory Coast, an unexpected choice of destination touted by Japanese officials as a potential gateway into West Africa’s market of 300 million people.

On Saturday, the delegation will travel to Mozambique, where Japanese companies are investing in the country’s significant natural gas and coal reserves.

Abe is due to give a speech at the Chinese-built African Union headquarters in Addis Ababa, Ethiopia, on Tuesday near the end of his trip. He's also to announce plans for the construction of a geothermal power plant.

“Abe wants to place his stamp on Africa, to say that Japan wants to be engaged in Africa,” Lehman said.

That's a goal many governments share, drawn by Africa’s natural resources plus investment and trade opportunities. But playing catch-up with Beijing is a tall task, given that China raced past the United States to become Africa’s biggest trading partner five years ago. Sino-African trade is now estimated at a whopping $166 billion.

Those are numbers any country would want to defend, even without the historical baggage China carries regarding Japan. Africa may prove to be the new focus for the two countries’ testy rhetoric.