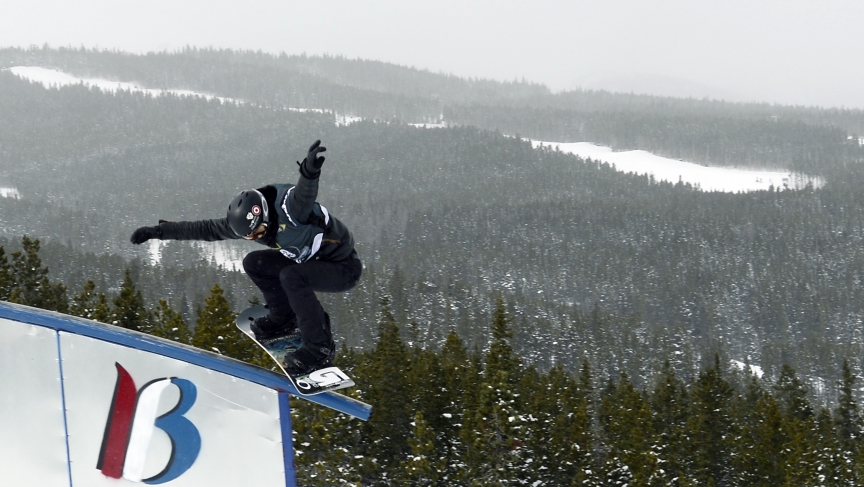 Shaun White competes during slopestyle qualifying for the US Grand Prix at Breckenridge Ski Resort in Colorado.

The Winter Olympics get underway in less than a month. The competition begins on the hopefully-snowy slopes in and around the Russian city of Sochi on Feb. 6.

In all, there will be 1500 hours of Olympic coverage available on television or via live-streaming — more than ever, according to NBC. But there will be other firsts in Sochi, as well.

Team Figure Skating will debut in Sochi. In addition to individual competition, teams of skaters from 10 countries — Canada, Russia, USA, Japan, Italy, France, China, Germany, Ukraine and Great Britain — will compete for a team medal over the course of three nights of events.

Josh Ellis of American Figure Skating says all of the athletes are excited by the new event, which works in a way similar to the team gymnastics competition — though these teams are mixed gender.

"Athletes compete by themselves to get a score and those scores are added together," he explained. "The top three teams with the highest scores will receive Olympic medals."

Ellis says team figure skating features all the right moves. "The triple-triple will be the buzzword for those tuning into this event," he says. "It's two triple jumps back-to-back. You'll see some go lutz-to-toe, some go toe-to-toe or loop-to-loop, and a lot of them will get points in the ladies' event.

"In the men's event, it's all about the quad — jump four revolutions and land on one foot. It's one of the more exciting and dangerous tricks in figure skating. And then ice dancing is very elegant, they'll do twizzles, they'll do lifts. It's a great sight to watch."

All those twizzles and lifts grab viewer's attention — at least that's what NBC is hoping as it competes against a new season of American Idol.

An event called Slopestyle will also make its first ever Olympic appearance at Sochi. Medals for fashionable ski wear? Nope. Slopestyle athletes are competing in an event that you might think of as skateboarding on snow. They basically do tricks while going down a mountain.

Ray Beveer, with the American Association of Snowboard Instructors at Okemo Mountain in Vermont, says slopestyle features a slightly crazy-looking, but dynamic, style of skiing. There will be enormous jumps and backflips, competitors sliding down metal and plastic boxes — and even a few really big crashes.

"I think that sometimes that's what people gravitate toward, just to watch the crash," Beveer says. "But everyone really needs to take a look at the athleticism there, these guys are amazing!"

But nevermind the crashes or a recent sarcastic comment by sports announcer Bob Costas, who compared slopestyle events to the stunt show Jackass. "I think the president of the IOC should be Johnny Knoxville (the host of Jackass), because basically this stuff is just Jackass stuff that they invented and called Olympic sports," Costas opined.

Beveer says slopestylers train hard and are thrilled to finally have their spot in the Olympic spotlight. All the tricks and spills, he adds, make slopestyle even more exciting than curling.

"Unless you're a fan of curling ... yes, slopestyle is going to be exciting, there's going to be lots of action," he says. "There's qualifying runs, there are semi-finals, so it's sort of like football, only more exciting for those of us who are snow sport enthusiasts. Don't miss it!"

Steve Zeitchik has been writing about Olympic television coverage for the Los Angeles Times. He says the "adrenalized" Winter Olympic newcomers — slopestyle, women's ski jumping, and halfpipe skiing among them — could help the Sochi Games reach new audiences.

"I think, generally, the idea here is to create competitions that are just going to bring in younger viewers. There's a feeling that as hair-raising as some of these things are, ... the Olympics tend to garner an older audience. If you bring in things like snowboarding, add more snowboarding events, more of these daredevil events, you're going to see a somewhat younger demographic and that's what they're going for," says Zeitchik.

Ski racer Lindsey Vonn is one American superstar who will be missing from this year's Olympics. She was forced to drop out of competition this week because of an injury. But look for some other star US athletes, Zeitchik says, to fill the void.

"One, of course, is Bode Miller, skiing in what is almost certainly his last Olympics. [He's] always a compelling figure, very complicated guy and athlete. The other is Mikaela Shiffrin on the women's side, [an] 18-year-old slalom specialist, very appealing. She's only been racing professionally for about three years, but is the reigning slalom champion," he says. "I think If NBC really wants to pick up the slack that Vonn is leaviing behind, Shiffrin is key to that."

And to pack a final punch, short track speed skater Apolo Ohno will be in Sochi. He won't be speeding around the ice track, but instead up in the TV booth, trying to help the rest of us follow all the spins, jumps and crashes.

Editor's note: This story was updated to correct the countries competing in the team figure skating event.