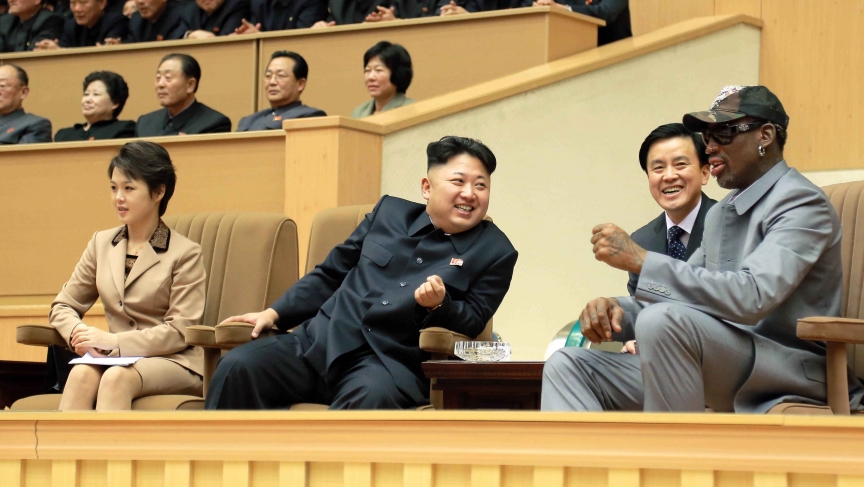 He calls it "basketball diplomacy." The phrase harkens back to the 1970s "ping pong diplomacy" that helped thaw relations between the US and China.

People like the Rev. Jesse Jackson are comparing the two in that way:

But Nicholas Burns, a former State Department official and ambassador to NATO, says it's wrong to make such a comparison. Burns says what he is doing is "disgraceful" and Rodman is making a mistake that is hurting the US.

"When the American National ping pong team went to China in the early 1970s, we had not had diplomatic relations with China for 20 years," he says. "They broke the ice. It was sports diplomacy. And it was a very important event that began to allow the Chinese and Americans to talk to each other."

There was a key difference in what the ping pong players did and what Rodman is doing in North Korea.

"The team did not embrace Mao," he says. "But they did do something important. They were apolitical."

Burns says the line that Rodman crossed is that he's become political and has, essentially, thrown his personal support to one of the most "odious figures" in modern politics, Kim Jong-un. Rodman calls the dictator his friend and even sang "Happy Birthday" to him Marilyn Monroe-style.

Rodman didn't question Kim about his politics, his threats to neighboring countries, his imprisonment of American Kenneth Bae or the execution of his uncle.

"So I don't think it's right to say that [Rodman] is somehow in the tradition of some of the people in the past who have done a lot of good by breaking down barriers through sports," says Burns.

And he argues, "the United States does have the capacity to talk with the North Korean government. We do that regularly. We usually don't, at all, agree with them. But there isn't an absence of communications that Dennis Rodman needs to fix."