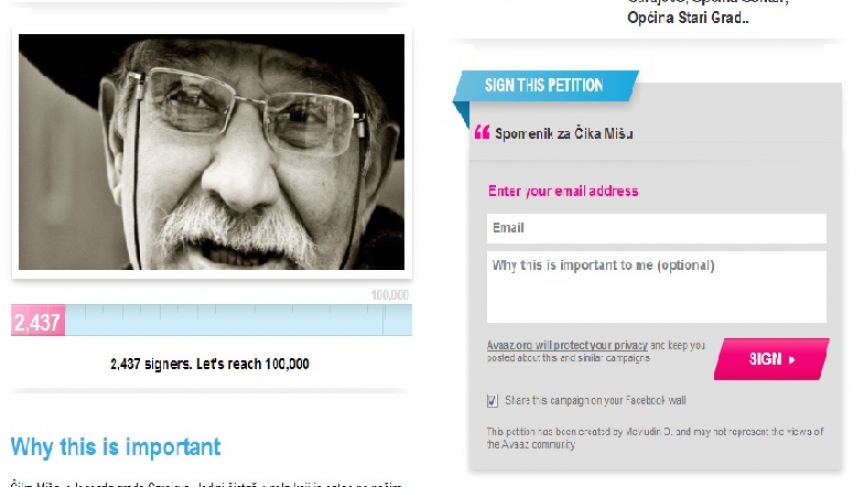 The online petition for a monument to be erected in memory of "Uncle Misho" has garnered about 2500 signatures.

In 1946, Hosein Hasani and his family left Kosovo and moved to Sarajevo in search of a new life.

Hasani was a teenager then and he was in love with boxing.

For seven years, he trained to become a professional boxer, but when he realized he wouldn't be able to make a living pursuing that career, he took over his father's job as a shoeshiner. Elvira Jukic, a journalist in Sarajevo who has written about Hasani, says very few people knew Hasani by his name. Everyone knew him as "Uncle Misho."

"I don't know anyone who doesn't know who Uncle Misho was," she says.

Jukic says he was a much-loved character in the city and people, rich or poor, loved to chat with him. She met him nine years ago and even took a photo.

"I found that photo yesterday and I was very glad that I found it because, for me, it's an old photo which I took with an analog camera. It's black and white and it describes the moment with him," she says.

Jukic says she was a little girl during the Bosnian war of independence, from 1992 to 1995. But she says those who were older say that Uncle Misho didn't stop his work. He kept on coming to his usual spot on the street and continued polishing shoes.

The beloved shoeshiner and his wife once found an abandoned child and decided to adopt her.

"His wife found this baby, more than 40 years ago, near a garbage dump, abandoned, and he said in one interview that his wife called him and said, 'Misho! I've found a pack of millions,' like money. She wanted to say that she found a treasure," Jukic recalls.

Jukic says Uncle Misho and his wife repeatedly said their adopted child truly was a treasure. Since Monday, when Uncle Misho died, the residents of Sarajevo have set up an online petition, asking the city to erect  a monument to him.