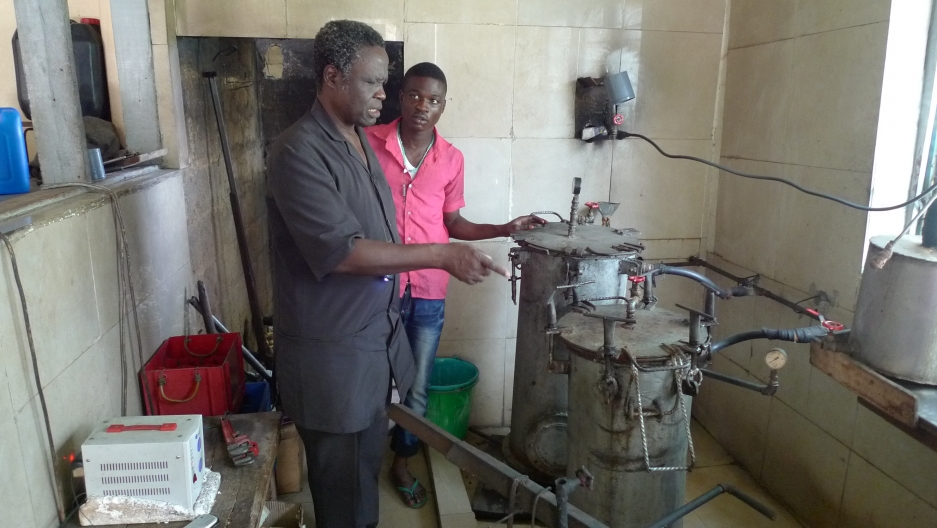 Dr. Oluyombo Awojobi inspects the autoclaves at his clinic in Eruwa, Nigeria. The autoclaves, which sterilize surgical equipment, are made from recycled propane cylinders.

In the small farming town of Eruwa, Nigeria, goats graze outside the entrance of a low concrete building. Inside, mothers recline with their babies on worn, well-used beds.

This is Eruwa’s main hospital. It isn't fancy, and it isn’t meant to be.

“For me, it doesn't matter what it looks like, as long as it's functional,” says Dr. Oluyombo Awojobi. He founded the hospital 27 years ago on that philosophy.

What keeps his hospital running — and growing — are cheap, simple devices that he designs and makes himself.

“I'm using materials readily available in my backyard,” he says.

The benefits of low-tech

Awojobi shows me the clinic's operating table. You raise and lower it not with electronic controls, but with a jack like the one you would use to change a car tire.

His blood centrifuge, which separates plasma from red blood cells, is made from used bike parts. You pedal with your hands and it spins the blood sample as fast as the propeller on a small airplane.

The suction pump that the clinic uses to remove blood and fluids during surgery is made from the valve on a bicycle inner tube and is also powered by pedaling.

The hospital's boiler is made from an old propane tank. For fuel, it uses corn cobs collected from nearby farms. The boiler produces steam for the autoclave, which sterilizes the surgical equipment.

Because most of Awojobi's devices don't need electricity, the hospital doesn't have to rely on the town's unpredictable electrical grid or spend a lot of money running diesel generators when power is down.

That keeps care at the hospital affordable to the farmers who make up its clientele. Delivering a baby costs $30.

And Dr. Awojobi says there is another advantage to designing his own equipment. “Because I make it, I will know how to mend it,” he explains. “I don't have to depend upon anybody else.”

Awojobi has been widely recognized for his inventions. He has been asked to lecture at medical conferences in India, Thailand, and the UK, and the Nigerian government has given him awards as a surgeon and as an engineer.

Dr. Oluyombo Awojobi founded a hospital in Nigeria that uses devices that he can build and maintain himself, keeping costs down. He'll take your questions in the comment section.

Among patients, his hospital has earned a national reputation for reliable, competent care. I met a woman named Bunmi Adams who came to the hospital for fibroid surgery. She flew in from Abuja, Nigeria's capital.

“Because I have heard a lot about Professor Awojobi, I decided on my own to come down here,” she said.

As for his inventions, Awojobi wants to make them as widely available as possible. He does not seek patents. Instead, he publishes his designs in international medical journals.

But he has been frustrated that only a handful of other hospitals have adopted his devices. To explain the resistance he has encountered from the medical community, Awojobi points to a quote from the Renaissance philosopher Niccolo Macchiavelli. He keeps it framed on his wall.

“There is nothing more difficult to carry out, nor more doubtful of success, nor more dangerous to handle than to initiate a new order of things,” it reads.

Since 2006, Dr. Awojobi has been trying another tactic to initiate his new order in medicine. He has taken on residents from a nearby medical school and is now training them to deliver his unusual style of high-quality care with low-tech equipment.

This story was produced with support from the International Reporting Project.