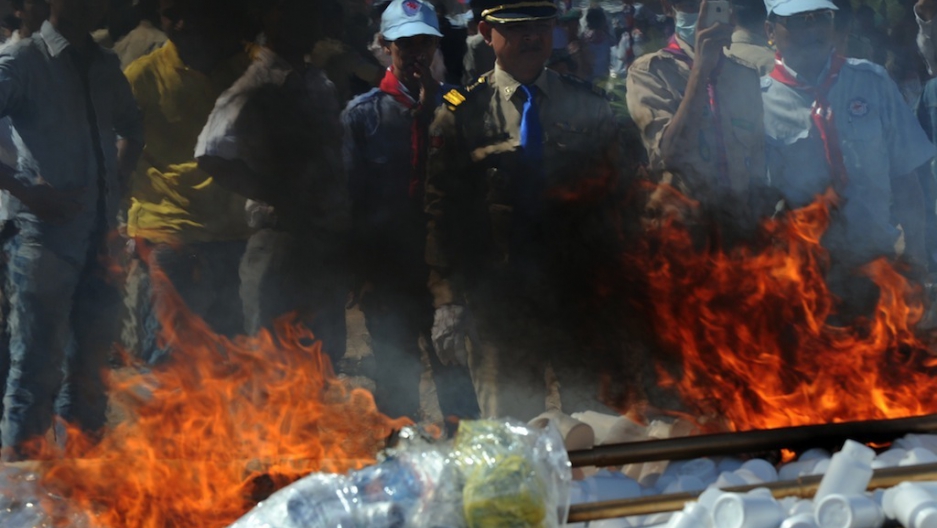 A Cambodian police looks at the flame and smoke from burning drugs during a destruction ceremony in Phnom Penh on August 28, 2012. Cambodian authorities burned more than one ton of drugs.
Credit: Tang Chhin Sothy
Share

PHNOM PENH, Cambodia — The “war on drugs” is being abandoned in many places around the world, and repressive drug policies are in retreat. In the United States, Europe, Latin America and even in a few places in Africa, the collateral damage from decades-long drug wars has created a push for more sensible policies. Unfortunately, in places like Cambodia, ideology continues to trump evidence, and drug users are subjected to arbitrary detention, forced labor, torture and other abuse.

Over the past decade, an increasing number of Latin American countries have joined some European countries in decriminalizing possession or personal use of drugs, and developing accessible and affordable harm reduction and other health services.

Morocco has proposed laws legalizing marijuana use, while Uruguay and Colorado and Washington states have begun implementing such laws. In sub-Saharan Africa, where most national drug laws are harsh and impose long prison sentences for minor offenses, a new African Union policy calls for member countries to find alternatives to incarceration for drug consumption.

Cambodia is quite different. The Cambodian government’s approach to drug users is simple: pick them up, lock them up, and force them to work and do exhausting physical exercises and military drills. Beat them if they break any rules, or to ensure that they don’t. And claim that this is treatment for drug dependency.

But make no mistake: Effective drug treatment never includes locking people up and subjecting them to torture and abuse.

I met recently with UN and donor officials in Bangkok and Phnom Penh about Human Rights Watch’s investigation into the eight “treatment” centers where the Cambodian government holds about 2,200 people a year. These centers are protected by guards and often surrounded by high walls or barbed wire fences. They are run by the police, gendarmerie and the army, or government agencies with no medical expertise.

The centers also hold other “undesirables": homeless people, beggars, street children, sex workers, and people with disabilities. However, the centers are not jails. People locked up in Cambodian jails have at least some due process rights: to a lawyer, to have their case heard by a judge (in many cases, after long delay), and to appeal. In drug detention centers, as a matter of law there are no such protections.

We interviewed people who had been recently released from the centers, including children and adolescents. Instead of being offered any treatment for drug abuse, they told us, they had been punched and kicked by center staff, whipped with rubber water hoses, hit with sticks or branches, shocked with electric batons, and punished with physical exercises intended to cause intense physical pain and humiliation, such as crawling along stony ground.

Women who had been held in these centers described sexual abuse by male guards, including rape. Many people were forced to work without pay on center vegetable plots or on construction site work-gangs. Anyone who refused was beaten.

The Cambodian government is not alone in treating drug users this way. It is common elsewhere in Southeast Asia and China, and elsewhere in the world too. In Ghana, we saw people who had smoked marijuana chained to trees in remote “prayer camps.” In Guatemala, even as the country’s president promotes legalization of drugs, there are reports of abusive “treatment” centers for drug users run by evangelical churches.

The voices speaking out for drug policy reform are diverse, and impressive. Members of the independent Global Commission on Drug Policy include former heads of state from a number of European and Latin American countries as well as a former US secretary of state, former United Nations Secretary-General Kofi Annan, the businessman Richard Branson, and prominent writers.

The commission has called for more humane and effective ways of controlling and regulating drugs, and for replacing the criminalization of drug use with a public health approach.

The push to end the failed “war on drugs” comes from a slow recognition of the enormous cost and damage to individuals and society of this approach. Cambodia’s efforts to address drugs are mostly recent ones; drug detention centers are a fairly new phenomenon, and the numbers of people detained are far less than in neighboring Vietnam or China.

Rather than spend another decade recreating the failed approaches of other nations, the Cambodian government needs to develop effective policies for treating drug dependence that respect human rights.

Shutting down drug detention centers and putting in place voluntary, community-based drug dependency treatment would provide hope to those struggling with drug dependency and put Cambodia among the global leaders calling for sound, healthy and humane drug policies.

Joe Amon is the health and human rights director at Human Rights Watch.