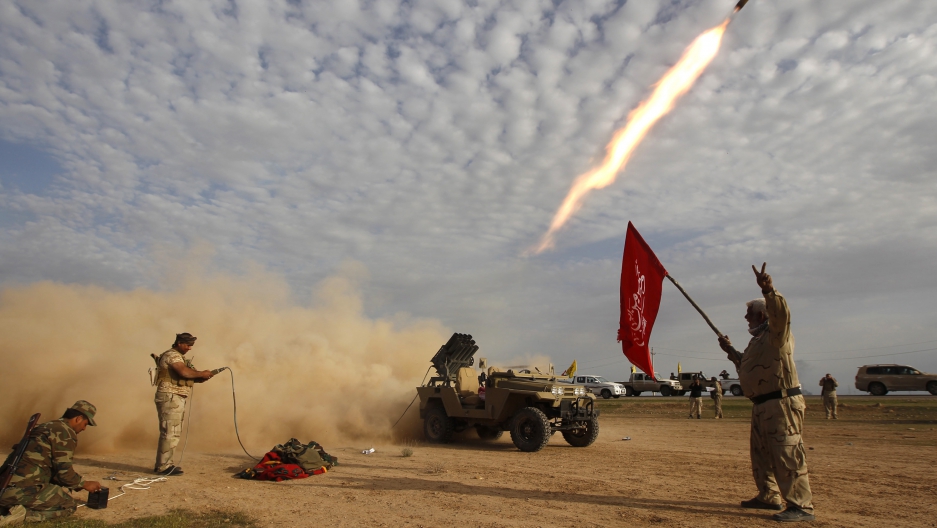 Shi'ite fighters launch a rocket during clashes with Islamic State militants on the outskirts of al-Alam March 8, 2015.

And for the past few years now, a new word has been popping up to describe the group known as ISIS, ISIL and the Islamic State. That word is “Daesh.”

In the wake of the deadly attacks in Paris, French President François Hollande has used described the term in lieu of ISIS or ISIL or Islamic State.  Secretary of State John Kerry has been using the term for the past year. But ISIS? They hate when people call them Daesh.

Daesh isn't actually a word. It's an acronym.

Sham is the historic Arab name for what you might call Greater Syria. In English and French, the old name for that region is the Levant, which is where the letter 'L' comes from in ISIL.

The term Levant first appeared in medieval French. It literally means "the rising," referring to the land where the sun rises. If you're in France, in the western Mediterranean, that would make sense as a way to describe the eastern Mediterranean.

Levant was also used in English from at least 1497. It's kind of archaic, but still used by scholars in English, though more widely in French. The Germans have a similar term for the same region: Morgenland, or "the land of the morning." It's even more archaic in German and kind of implies an imaginary, romantic, never-never land.

Why does ISIS hate being called 'Daesh?"

The jihadist group has been pretty open about their feelings about their acronym DAESH. It carries a perjorative meaning as an acronym, and the they've vowed to cut out the tongue of anyone using it.

“[Daesh] can also be understood as a play on words,” says writer Zeba Khan, who wrote a story about the term 'Daesh' for the Boston Globe. “There’s a very strong literary history in the Middle East, which goes back centuries. And the mechanisms of allusion and double meaning — there’s a very strong tradition of that in the region.”

In Arabic many words are based off of a three letter “root” system. Classical Arabic and Hebrew work in this way, where there are three basic letters and from those letters you can conjugate into many different forms.

“If you do that with the base root that forms the word ‘Daesh’ you can come up with a lot of double meanings that have very negative connotations.

One play of the word “Daesh” is the Arabic word “daes.” “Daes,” just one letter shy of “daesh,” means “to trample or tread on.”

Why does it matter?

Scholars today largely agree on the bounds of the Levant, extending from the Antakya region of Turkey, through Syria, Lebanon, Israel/Palestine, Jordan and round to the Sinai Peninsula in Egypt. Some include Cyprus, as well. This coincides exactly with the classical Arab region of Sham.

The origin of the term Sham is commonly misunderstood. Many in the Middle East believe it comes from 'shams,' the Arabic word for sun. That would fit nicely with the origin of the word Levant, as the land of the rising sun. But the true meaning is more interesting.

The use of Sham by ISIS may indicate the scale of its ambitions, in terms of the boundaries of the Islamic state it is trying to set up. So it makes sense that ISIS, or ISIL, or Daesh, is fighting simultaneously in Iraq and Syria. And now in Sinai, in Libya, in Afghanistan and in Europe.

And then — of course — there's the political ramifications.

The acronym ‘Daesh’ was coined in 2013 by a Syrian activist, according to Zeba Khan.  And the term was quickly adopted by Syrians on the ground fighting ISIS and the Assad government, she says.

“The US should be leaning into the narrative and the worldview of the people that we’re supporting and not the narrative of the terrorists,” says Khan.

“[ISIS] is keenly aware that the war of words matters just as much as the brutal acts that they commit and we should be paying attention to the words as much as they are. If the US uses ISIS or ISIL, which is what the Obama administration officially uses, then we’re essentially giving them and their word view legitimacy,” says Khan.

Hear our 2014 conversation with The World's resident history buff, Christopher Woolf, about the ancient roots of the different names.