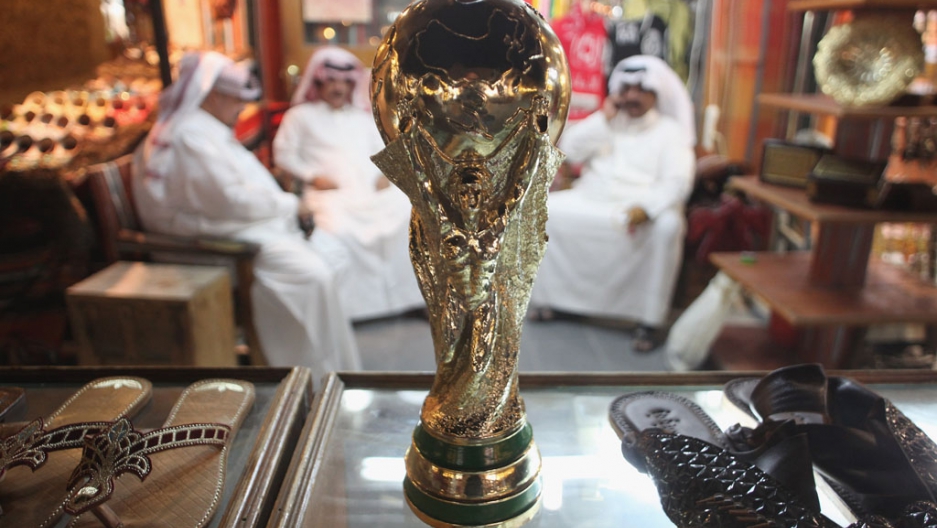 Arab men sit at a shoemaker's stall with a replica of the FIFA World Cup trophy on October 24, 2011 in Doha, Qatar. Qatar will host the 2022 FIFA World Cup.
Credit: Sean Gallup
Share

Put aside concerns that it’s just too hot during June and July to play soccer in Qatar.

That’s not why so many are furious the second most powerful FIFA executive is talking about moving the tournament to November rather than the traditional June and July.

“To be honest, I think it will be held between Nov. 15 and Jan. 15 at the latest,” FIFA general secretary Jerome Valcke told Radio France on Wednesday.

“That’s the time when the weather conditions are best, when you can play in temperatures equivalent to a warm spring season in Europe, averaging 25 degrees (Celsius, or 77 Fahrenheit). That would be perfect for playing football.”

The Los Angeles Times said FIFA is now facing a “firestorm,” while Bleacher Report said Valcke’s statements “put the icing on top of an already crippled, laughingstock of a cake.”

Last August, the new chairman of the Football Association in England said it was “impossible” to stage a World Cup in the Middle East in the middle of summer.

“I don’t know how many people have been to Qatar in June. I have,” Greg Dyke told Sky News. “The one thing I can tell you is you can’t play a football tournament in Qatar in June.”

A fall-winter World Cup would disrupt domestic leagues across Europe. Shutting up shop, or altering their schedules, might impact bottom lines for owners and sponsors, and they don’t like it.

The weather argument is their way of trying to admonish FIFA into moving the 2022 event.

Let’s face facts: there are few places where it’s comfortable playing soccer in July. Running around under a blazing sun for 90 minutes in July takes some dedication regardless if you’re in Montreal, Madrid or Madras.

Since 1990, the World Cup has been played in South Africa, Germany, South Korea and Japan, France, the United States and Italy.

Look at their average summertime temperatures (as recorded by Weatherbase) and you’ll find temperatures that routinely reach 80 or 90 F (minus South Africa, a Southern Hemisphere nation).

Rio de Janeiro, Brazil – where the World Cup will be decided later this year – has an average high of about 81 F and records of 102.

Paris and Berlin have recorded high temperatures of 95 F, and it was 81 when the 1994 World Cup final was decided in Los Angeles.

OK, we understand, it’s an entirely different melting ball of wax in Qatar. The average high is 104 F in June and July, with extremes of about 118.

It's just that the Qataris don’t care if they're whining in Europe. Remember, in nearby Dubai, they ski – all year long.

The money is there. The willingness is there, and it’s someone else’s turn to play.

“The cooling system for the stadia will be very much part of our legacy. But if the football world or FIFA want it to be staged in the winter then we are happy and ready. If they want it in summer, then we are still ready.”