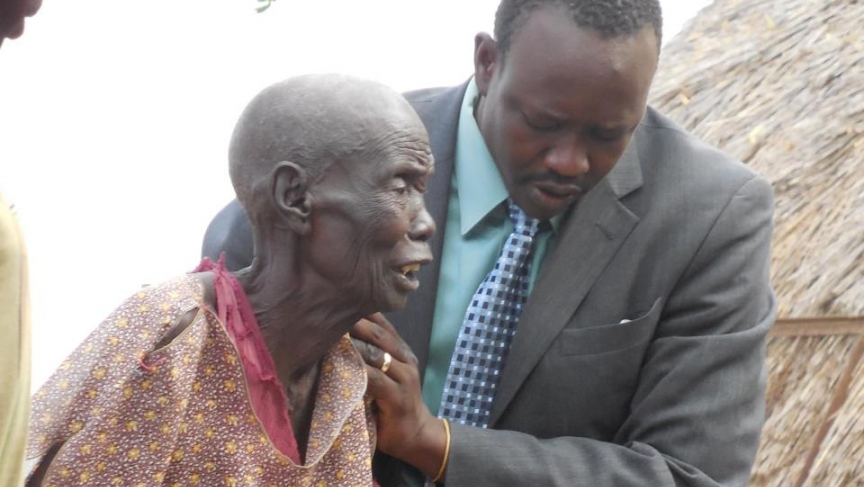 Jacob Atem in 2012 with his step-mother in the village of Maar, South Sudan.

Jacob Atem has been through hell and back, twice.

Two decades ago, he was one of the "Lost Boys of Sudan," part of that wave of Sudanese war orphans who wandered through East Africa in the 1990's, fleeing the civil war in southern Sudan.

Atem, like many of his peers, resettled in the US. He worked his way through college, graduated from Michigan State University and became an American citizen.

But when South Sudan achieved independence two years ago, Atem and many of the other Lost Boys started to venture back.

In recent weeks, they've been swept up again by violence — this time, the fighting among political factions within South Sudan.

Atem is now safely back in the US. But he's worried about the fellow Lost Boys he left behind.

"There are more Lost Boys who are in the bush with their families," Atem says. "Many of my friends like Andrew [Abith Abui] didn't make it. Andrew is one of the Lost Boys who is just like me but he [was] in Panrieng in Unity State. He is Dinka and, unfortunately, he was killed. "

Atem says South Sudan's Dinka and Nuer ethnic groups can live side-by-side. "Now children are in the bush like I was in 1991. The bottom line is we need to coexist together. We just need good governance, freedom of expression," he insists.

"I blame this on the government. They need to get their act together and have something called democracy, not this prejudice idea that you're Dinka or Nuer. We're South Sudanese, that's the bottom line."