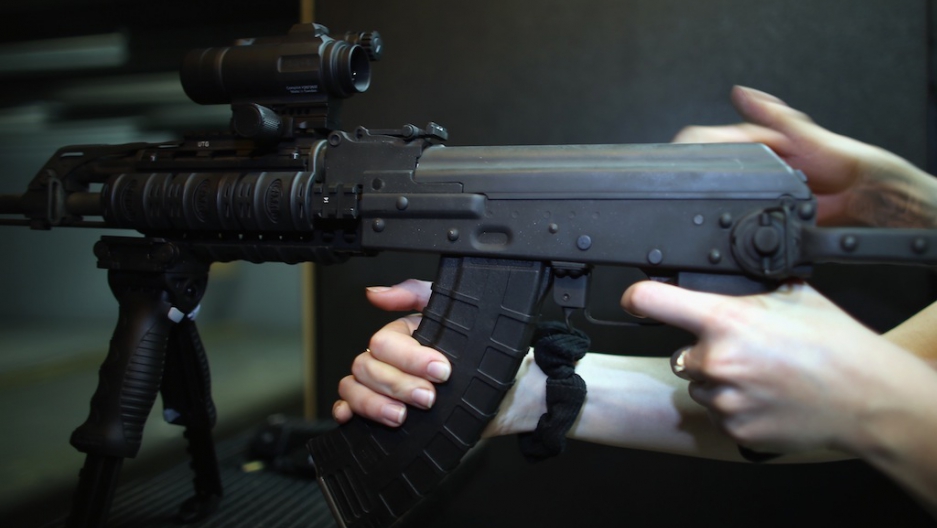 As the U.S. Senate took up gun legislation in Washington, DC , a weapon was used on the indoor firing range at the National Armory gun store on April 11, 2013 in Pompano Beach, Florida. The Senate voted 68-31 to begin debate on a bill that would significantly expand background checks for gun sales.
Credit: Joe Raedle
Share

As we begin 2014, we still haven’t engaged in a conversation about gun control that brings both sides together.

Polls indicate a country more or less divided over how to prevent another school shooting. And while legislation has been proposed to reign in the gun lobby, sales of guns have soared.

This debate is not a new one in the United States, and while it intensifies with each tragic mass shooting, the conversation rarely advances. Frustration sets in as each new action causes the other side to dig in their heels even further.

We wonder: Is there another way to frame this issue?

For the last 20 years I have led an international organization that works in war torn countries to negotiate an end to conflict. In places like Northern Ireland, El Salvador, South Africa and the Balkans, groups once driven to violence to defend their beliefs have put down their weapons, sat down at a table, overcome their differences and negotiated. Moving beyond conflict is, indeed, possible.

One dynamic I have observed present in all successful negotiations — which is missing from our current debate over gun control — is a recognition of the role of sacred values.

Social scientists define sacred values as a set of values or principles that individuals and communities hold dear to their idea of right and wrong, that define who they are and help guide their daily lives. We first came to see the critical role played by sacred values in the 1990s in dealing with the bloody conflict in Northern Ireland in which thousands of people were killed.

No one used the term sacred values back then, but we could see clearly that one of the reasons negotiations to end sectarian conflict between Catholics and Protestants in Ireland were failing was because they were not recognizing or respecting the deep differences in values, cultures and identities that each side held.

Over several years, working with a team of international negotiators, we created programs that specifically addressed the threats each side felt to their core identities. We didn’t try to resolve these historic differences, we just worked to get each side to recognize and respect them. This involved exercises in self-examination, envisioning and humanizing each other. When negotiations broke down, we brought leading members of the political parties to Harvard University to have a neutral space. It took eight years, dozens of meetings, and hundreds of people to begin to change people’s minds. At the time, we didn’t use the term sacred values, but peace would have not been possible without doing so. People do not kill each other over symbolic issues like the design of their flag. They kill each other when they feel their core identities, as they ascribe to that flag, are under threat.

Although the role sacred values play in conflict has been in psychology literature for at least 20 years, and resonates intuitively with many people, it has yet to move from the social sciences to policy, or be regularly applied in resolving conflict abroad or at home. However, this research is growing and becoming interdisciplinary, and now includes neuroscientists, all of whom substantiate the role sacred values play in driving human behavior.

The most recent research shows that sacred values actually have a biological basis in the brain and are experienced in ways observable to scientific study. Gregory Berns, a neuroscientist at Emory University, has used neuroimaging technology to identify brain regions associated with calculations of sacred values. Early results suggest that sacred values are processed in a separate part of the brain than less important decisions or beliefs, and may cause us to react physically when a challenge is made to our sacred belief. It’s hard to listen to reason when you’re feeling under threat. No wonder the conversation is going nowhere.

Perhaps some will say that a discussion involving sacred values and gun control is too emotional and not concrete. Partisans on both sides insist this is a policy debate that needs to be determined by facts and figures and the emotional component should be set aside so rational debate can take place. But 20 years of experience, as well as the insights about the way sacred values are processed, suggest that emotions, symbols and narratives must be engaged rather than dismissed in order to make progress.

In fact, research and statistics alone are getting us nowhere. An interdisciplinary team of social scientists examining the Israeli-Palestine conflict showed that when asked to compromise a sacred value through a utilitarian trade off, respondents replied with aggression to that approach, exhibited moral outrage and held on to that sacred value more deeply than previously. In short, facts and figures hurt rather than helped the case.

How can we address gun violence through the lens of sacred values?

To begin, we can advocate creating a neutral space for representatives of both sides to actually meet, face to face, and listen to each other. People need to be able to articulate for themselves what is sacred. These conversations should focus on getting each side of the debate to recognize and respect the identities and sacred values of their opposition. It is only once people feel that their identities are not threatened that their minds can be open to listening, and we can bring this debate back into the arena of facts and figures and make it a rational discussion.

Speaking more broadly, we call on social scientists to elucidate the values behind our beliefs about guns. We advocate for a campaign that recognizes and respects the identities and sacred values of each side of the debate.

Looking forward, we call to further neuroscience research into how we process sacred values and how certain issues become immune to resolution. Such research should be supported, continued and valued as critical to policymakers and negotiators.

Recognition of the sacred values in play in the gun control debate could form the basis for a new approach to deeply felt and polarizing conversations about gun control and other issues of public policy and lead to a greater awareness of human behavior. Talking about them won’t bring any change to the families of the many victims of gun violence, but it may just bring us as a nation a little closer to resolving our differences and address the most fundamental challenge we face as individuals and as a society – agreeing on how to protect our families and homes.

Tim Phillips is co-founder of Beyond Conflict, an international organization that advocates for peace and reconciliation.