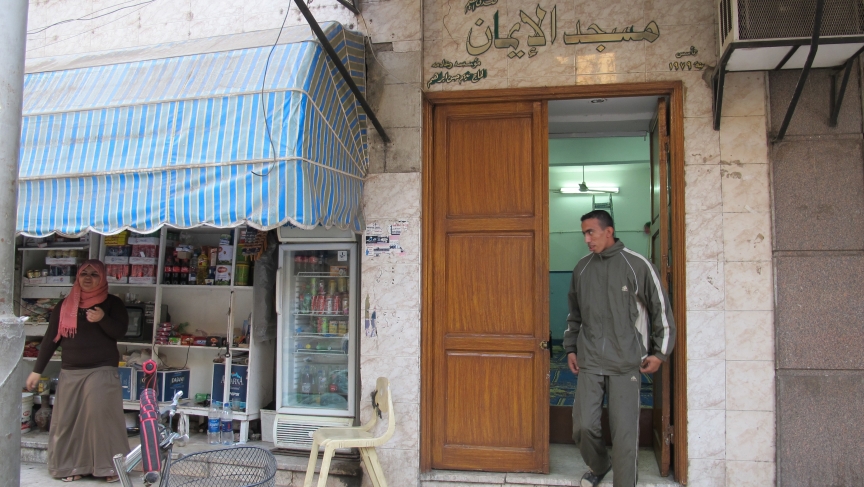 In Cairo, the Faith Mosque is one of many tiny zawyas, or mini-mosques, found on just about every other street. It is nestled on the ground floor of a concrete apartment building next to a small grocery story.

Egypt's military-backed government has cracked down on deposed President Mohammed Morsi’s supporters since his overthrow. It has arrested almost the entire Muslim Brotherhood leadership and thousands of its backers, as well.

But it is not just the Islamist Brotherhood the government is trying to control — it’s all aspects of religion in Egypt. And that means controlling both the country's largest, and smallest, religious institutions.

In Cairo’s winding side streets, you find carts pulled by horses or motorcycles, loaded with produce. And on just about every other street, there is a place for men to stop and pray. It’s called a zawya, a kind of mini-mosque. And they are located in basements and storefronts across Egypt.

Caretaker Fawzy Mohamed leads the afternoon prayers at the tiny "Faith Mosque" in the Cairo district of Manial. A few months ago, Egypt's minister of Religious Affairs banned Friday sermons at many small mosques like Mohamed's.

“Of course we are very sad,” Mohamed said, “because there were other people here with us, good people, who came to pray the Friday prayer here with us.”

The minister also revoked the licenses of tens of thousands of imams preaching at some zawyas, claiming they were promoting terrorism. The government pays the salaries of most of the country’s Imams. Now it is trying to control the messages coming from the mosques by requiring that all imams are graduates of Al-Azhar University.

“Al-Azhar is a mosque and a school," explains Ahmed Morsey, "a school that was built to teach Islamic theology, sharia.” Morsy is a research associate based in Cairo for the Carnegie Endowment for International Peace. He says Al-Azhar University, a thousand-year-old institution, is a key player in Egyptian politics.

“The Egyptian government — since Nasser and until Mubarak, I would argue even until now — they believe that they need Al-Azhar every single step. Al-Azhar represents a very important institution that can give legitimacy to the ruler, regardless of what the ruler is doing,” Morsy argues.

Or Al-Azhar can take that legitimacy away.

When Egypt's military pushed out President Morsi last summer in response to huge protests against the Islamist leader, Al-Azhar stood with the military, not with the President. Soon after the nation's top general announced the decision on state television, the Sheikh of Al-Azhar, Ahmed el-Tayyeb, voiced his support.

“Working from Islamic texts, I have agreed with [the military’s] decision, supported by the people,” the Sheikh said. “I pray to God almighty that this plan will serve to unite two opposing parties living on one soil and drinking from one Nile.”

Morsi supporters were livid. During the 2011 revolution, Al-Azhar said protests to oust Hosni Mubarak were “un-Islamic.” So how could the university now support the protests to remove Morsi?

After the military takeover, popular television preacher Safwat Hegazy railed against Al-Azhar’s Grand Imam in front of a massive pro-Morsi sit-in in Cairo. “Now, you are saying that demanding the overthrow of a president who is legitimately, democratically elected is permissible!” Hegazy decried.

As the crowd roared its agreement, Hegazy shouted that the Grand Imam’s decision was invalid and should not represent the institution — and tradition — of Al-Azhar.

Hundreds were later killed as the military cleared that sit-in. Hegazy and other pro-Morsi preachers like him were among thousands arrested.

Protests have since retreated to universities, including the campus of Al-Azhar itself. Hundreds of students there have demonstrated against the university’s cooperation with the military-installed government.

Al-Azhar is legally independent from the government, but its funding is controlled by the Ministry of Religious Affairs, and the ministry’s ranks are filled with Al-Azhar grads. Unlike the western separation of state and religion, many Egyptians expect that the government should play a role in religious life.

“Because Islam and politics have been so intertwined through the centuries. It's very difficult to think of Islam without the political aspect, because, for Muslims, Islam represents not only a religion, but a way of life in general,” says the Carnegie Endowment’s Ahmed Morsy.

The military-run government struggles these days to control what's being said in the mosques — about what it means to be not only a good Muslim, but a good Egyptian in these chaotic political times.

Which is why the government is cracking down on worship by Fawzy Mohamed and others in the small zawyas. In Egypt still, government and religion go hand in hand.

This piece was first broadcast as part of the public radio program Interfaith Voices and its series "God and Government."