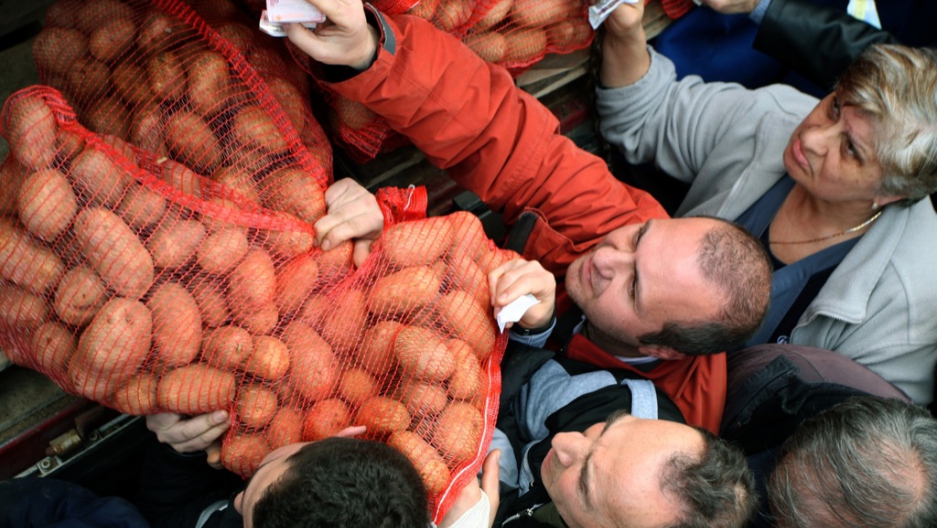 Look at this bag of insults.
Credit: SAKIS MITROLIDIS
Share

JOHANNESBURG, South Africa – In Zambia, call the president a “potato” at your peril.

This seemingly innocuous word, used to describe Zambian President Michael Sata during a radio show Monday, got an opposition leader thrown in jail and charged with defamation. If convicted, Frank Bwalya faces a maximum sentence of five years in prison.

Points for calling your leader a spud.

But this is hardly the most colorful insult one finds in the region.

As a public service, GlobalPost here decodes "potato" and other headline-grabbing insults from around southern Africa.

In comparing Zambia's president to a potato, the actual phrase used was “chumbu mushololwa,” a Bemba term that literally means a sweet potato that breaks easily when bent. It refers to someone who is stubborn and inflexible, and who won’t listen to the opinions of others.

Bwalya’s supporters argue that this is not an insult, but rather “a perfectly legitimate way for one politician to describe a fellow politician, if indeed that person is stubborn by nature.”

Either way, it seems an apt description for President Sata, who is known for his sharp tongue and increasingly autocratic behavior since being elected president in 2011.

In Zimbabwe, dozens of cases have been filed in recent years under a law that makes it a crime to insult the president — and which is often used to harass and intimidate critics of President Robert Mugabe, who turns 90 next month.

In the Shona language, the phrase “dhongi rinokamina” refers to a lame draft animal that is no longer of any use and must be put out to pasture.

A Zimbabwe court ruled in November that the “insult law” is unconstitutional, and said prosecutors should not be overzealous about charging people who make comments about Mugabe “in drinking halls and other social places.”

But reports from Zimbabwe suggest that despite the court ruling, the law is still being used.

So maybe hold off on calling Mugabe a “limping donkey” just yet.

This one wasn’t intended as an insult. But when a South African tourist spotted a framed portrait of Botswana's president at a border post and remarked that he “looks like a Bushman,” she quickly found herself in a world of trouble.

The woman was interrogated, kept in jail overnight and forced to pay a fine before being freed.

The Bushmen — also known as the San, or the Khoi — are the original people of Southern Africa, some of whom still follow a traditional lifestyle as hunter-gatherers.

In Botswana they have faced discrimination and persecution by government officials. Ian Khama, the president of Botswana, once described their way of life as “an archaic fantasy.”

"A South African person thought resembling a Bushman was complimentary, but Botswana officials took it as an insult,” the director of Survival International, a group that campaigns for the rights of indigenous people, said after the tourist's arrest in 2009.

“You couldn't have clearer evidence of the racism towards Bushmen in Botswana than this incident.”

In South Africa, insults won’t get you locked up.

President Jacob Zuma has been called a “monster,” a “tyrant” and “illiterate,” among many other things. The abaThembu king called him “a liar who doesn’t use condoms.”

Zuma too has been known to take mean swipes, for example calling the opposition party's parliamentary leader “ntombazana,” the Zulu word for a “young girl."

But one of South Africa's more colorful taunts made headlines a few years ago thanks to Julius Malema, the loudmouthed former African National Congress youth leader, who called a BBC journalist "tjatjarag."

Not the easiest of words, but a useful one, meaning someone who is annoying, in a hyper and overly excitable sort of way.

Tjatjarag. Keep that one in your back pocket.