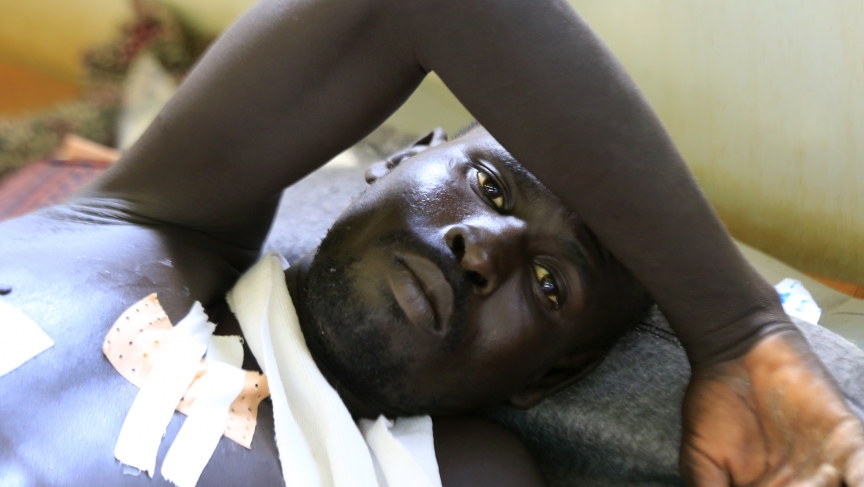 A displaced man rests at the UN's Tomping camp, where 15,000 displaced South Sudanese are sheltered.

Warring factions in South Sudan may have taken a small step toward peace. The two sides actually sat down Tuesday for peace talks in Ethiopia.

But so far, they don't have much to show for it.

The talks hit a bump right away over rebel demands that the government release several supporters of former Vice President Riek Machar.

South Sudan's government blames Machar for starting the violence that, so far, has killed more than 1,000 people and driven hundreds of thousands from their homes. The fighting began in mid-December and pits ethnic Dinka against ethnic Nuer.

Gayle Smith, a senior director at the US National Security Council and one of President Barack Obama's advisors on South Sudan, says the White House is watching the situation closely, particularly the allegations of ethnic atrocities.

"That's very much at the forefront of everybody's mind," Smith says. "It's one of the reasons this conflict is so terribly, terribly dangerous. And why we and everyone else are pushing very hard on the parties, whatever there disputes might be, to solve them politically, rather than military. Because this has unleashed a current of ethnic violence that could spiral well out of control."

Smith says no one, not the people of the region or Americans, can afford for South Sudan to become a failed state. She says she hopes China, which has economic ties in the area, plays a role in helping to bring an end to the violence.

"What they have said publicly is that the parties need to negotiate politically. I think hearing more of that from China would be helpful," she adds.