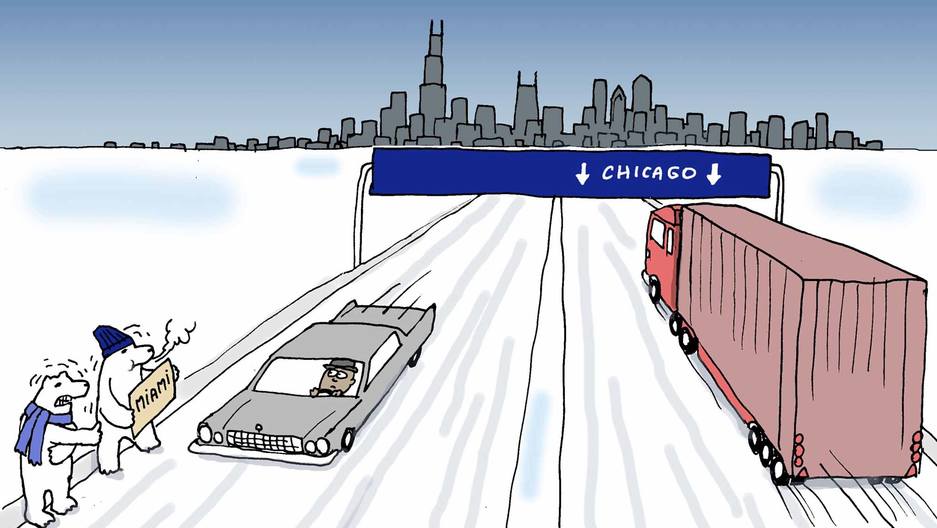 It's so cold that when you blow bubbles, the bubbles freeze, float to the ground and roll around. You won't believe the pictures.

It's so cold that polar bears are packing up and heading for Florida. OK, that one might not be true. But across the US, it's the coldest it has been in 30 years, according to one National Weather Service meteorologist. But take heart, America. Spring is just 71 days away. Until then, leave us a comment with your It's so cold that __________.

How do you punish people with guns? Carefully...

Hundreds of senior police officers in Turkey woke up to find themselves reassigned to traffic duty Tuesday. The reason? A deepening power struggle between Prime Minister Recep Tayyip Erdoğan and his opponents in law enforcement and the judiciary. All told, about 350 officers were either dismissed outright or reassigned.

Allegations of political corruption and gamesmanship have been lobbed back and forth. But, as The Guardian reports, it’s a struggle as much to do with Turkey’s political identity as with police corruption: "Erdoğan and the Hizmet movement of cleric Fethullah Gulen, which exercises influence through a network of contacts built on sponsorship of schools and other social and media organizations, accuse each other of manipulating the police and compromising the independence of the judiciary." In many ways, it is a battle over the secular tradition of Turkish politics.

2014 is shaping up to be a strong year for al-Qaeda and its affiliates. Last week, ISIS — an al-Qaeda-linked militant group — took control of the Iraqi cities of Ramadi and Fallujah and is still holding onto Fallujah.

The New York Review of Books looks at how ISIS has come seemingly from nowhere to take a dominant role in Syrian politics. In its wake, ISIS has left public beheadings, Sharia Law and communities where ethnic minorities have been driven out. Some experts, reacting to the terrorist-linked group's new power, have even called for re-engagement with Bashar al-Assad, as the lesser of two evils.

“You live a fancy life, you wear posh clothes, and people will notice you.”

In South Africa, HIV/AIDS infection rates remain far higher for teenage girls than for boys. Part of the reason is the prevalence of "sugar-daddy" partnerships — relationships between older men and younger girls, often involving financial reward. PRI's The World reports on why young girls agree to these relationships in spite of public education campaigns that warn them of the dangers of sugar daddies.

Shaw was more than Kung Fu, though. He was responsible for starting the TV and movie industry in Hong Kong back in the late 1950s. The South China Morning Post looks at his very long life. He died Tuesday at the age of 106.

Would you choose Silicon Valley over Paris?

French entrepreneurs are doing just that, and bringing their cafes, culture and customs to California. PRI's The World reports on why many say it is harder to innovate in their home country than in Silicon Valley. And French emigrés to the US are certainly leaving their mark in the tech world, from Pierre Omidyar of eBay fame to semiconductor pioneer Pierre Lamond and serial entrepreneur Philippe Kahn.

More Americans are excited about midterm elections (51%) than about the World Cup (22%). #probablydifferentelsewhere pic.twitter.com/OqSmDa8ec5

The Philippines are in line for another bout with a tropical storm. According to AccuWeather, there's an area of atmospheric instability that could lead to a tropical depression forming this week east of the Phillipines. If such a storm materializes, it would take a path near to the course Typhoon Haiyan had earlier this year.