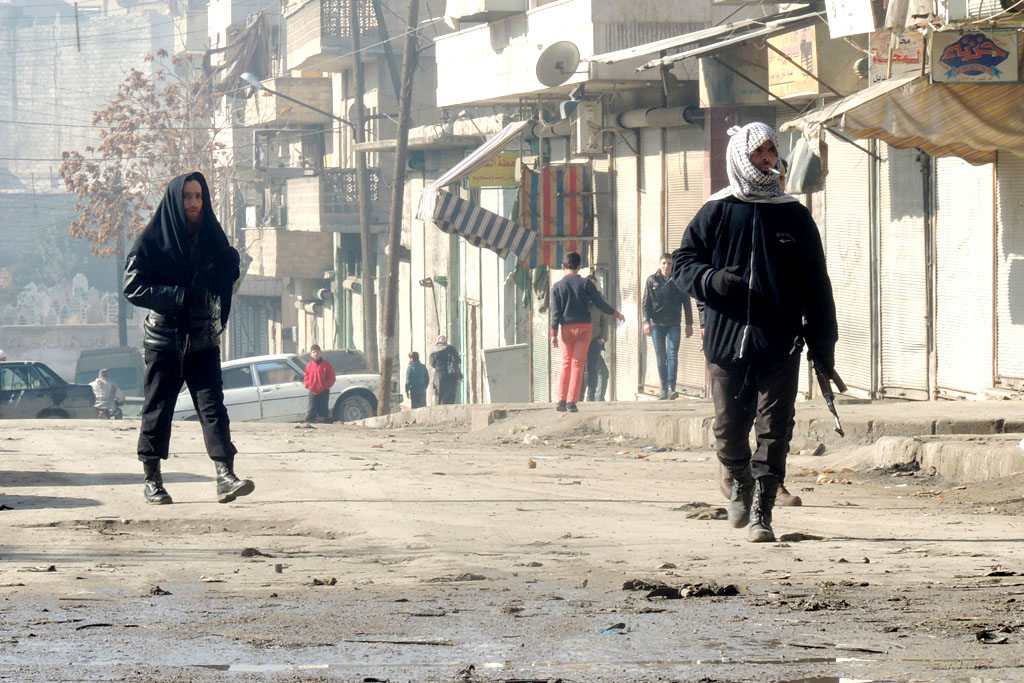 Rebel fighters, one holding a weapon, walk in a street on January 7, 2014 in the northern Syrian city of Aleppo.
Credit: AFP
Share

The chief of the Syrian Islamist rebel group Jabhat al-Nusra called for an end to infighting among rebels on Tuesday.

In an audio recording, Abu Mohamed al-Golani called for a ceasefire between varying factions of rebels who last week turned from fighting against Syrian President Bashar al-Assad's troops to fighting each other.

Golani laid the blame for much of the bloodshed at the feet of the Al Qaeda offshoot known as the Islamic State in Iraq and the Levant (ISIL), which operates in both Syria and Iraq.

"This unfortunate situation has pushed us to launch an initiative to save the battlefields from being lost," Golani said. "This will be done by forming an independent legal council by all the (rebel) factions in addition to a ceasefire."

He also called on fighters "to give priority to the fight against the regime."

While both ISIL and Jabhat al-Nusra have ties to Al Qaeda, Nusra has been more successful at working with moderate rebel groups in Syria.

Meanwhile, ISIL has managed to incur the wrath of Syrians and stands accused of atrocities such as widespread kidnappings, torture, assassinations and public executions.

As Golani made his call for a ceasefire, reports from activists in Syria suggested ISIL executed an unknown number of prisoners as it came under fire from other rebel groups near Aleppo.

The reports said many of those executed were activists and journalists.

The Los Angeles Times reported: "Activists posted images on social media sites depicting corpses with what appeared to be gunshot wounds to the head at point-blank range, as well as videos showing decapitated corpses in mass graves. The claims and images could not be verified due to restricted access to the area because of continued clashes."

The problem of verification has led to the United Nations announcing it could no longer update its official death toll in Syria.

"It was always a very difficult figure," the UN Office of the High Commissioner for Human Rights spokesman Rupert Colville told the Associated Press.

"It was always very close to the edge in terms of how much we could guarantee the source material was accurate. And it reached a point where we felt we could no longer cross that line. So for the time being, we’re not updating those figures."

Colville said the UN could not endorse anyone else's death toll figures, including the oft-cited UK-based Syrian Observatory for Human Rights.

The Observatory's latest figures put the toll at more than 130,000 people killed since March 11.