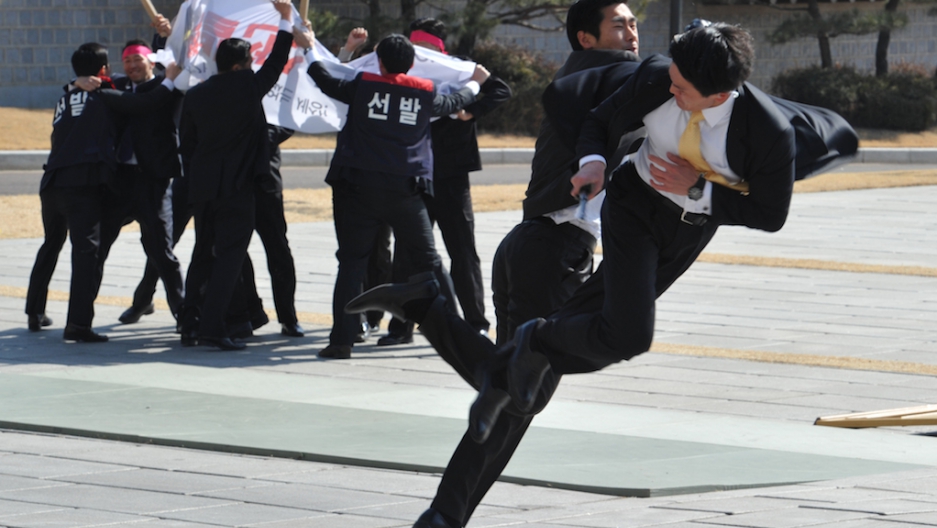 SEOUL, South Korea — Read South Korea’s 1948 National Security Act and you can glean a picture of the perilous era during which it was written.

The, which law bans communism and “anti-state activities,” was passed in the tense two years leading to an invasion by the country’s chief enemy, North Korea. The resulting Korean War of 1950 to 1953 leveled entire cities and left more than 2 million civilians dead.

South Korea may be prosperous and more stable today, but the legacy of the Cold War hasn't vanished. North and South Korea are technically still at war. Any semblance of calm is maintained by a 1953 armistice that Seoul has refused to sign, leaving wartime command to Washington.

But what happens when archaic anti-communist laws collide with the growing expectations from South Koreans — who live in a relatively young, 26-year-old republic — that their government should guarantee free expression and peaceful assembly?

That’s the conundrum facing this vibrant nation, which has responded by rolling back democracy in recent years, according to international watchdogs like Amnesty International and Freedom House.

2013 was a particularly troubling year.

The authorities indicted 102 people under the National Security Act, the highest number in 10 years and a more than threefold increase from seven years ago, according to numbers released last week by the Supreme Court. Among the suspects, 62 were convicted, four were acquitted, and the rest await verdicts.

A guilty verdict can carry months to years in prison. Many of the accused are left-wing activists and critics who have allegedly made statements sympathizing with or lending support to North Korea.

In September, NIS officers arrested a far-left lawmaker on charges that he once praised the idea of an insurrection against the South in the event of the North Korean invasion. This was the first time in the democratic era that a sitting lawmaker has been stripped of his immunity and arrested under the law. The government has since moved to disband his United Progressive Party (UPP), the third largest in the National Assembly.

The NIS says it has an audio recording as evidence, meaning the accusation against him may turn out to be true.

Some cases prosecuted under the law have been far from egregious. In November 2012, one 24-year-old was sentenced to 10 months in prison for re-tweeting a North Korean propaganda post — even though the judge acknowledged that some of his tweets were parody.

The arrests are part of a broader rollback of democratic institutions in the past five years, a trend that has sent a chill through activists in Seoul. In 2011, Washington-based watchdog Freedom House downgraded South Korea’s press freedoms ranking from “free” to “partly free” for the first time since 1988, the year its first democratically elected president took office.

Freedom House has also downgraded South Korea’s internet freedom, pointing to rising web censorship. In 2012, the government blocked 39,296 websites, citing pro-North Korean content banned by the National Security Law, as well as anti-obscenity and other regulations — a more than eightfold increase from the 4,731 censored websites in 2008. North Korean news sources are inaccessible from Seoul, including some that are politically neutral and not affiliated with the regime.

The political left is crying foul, proclaiming that the conservative administration of Park Geun-hye, the country’s first female president, is neglecting the system of checks and balances. “Now is the appropriate time to call the government a public security government,” said Kim Ye-chan, policy director for the left-wing Labor Party, a minority group with a few seats in the National Assembly.

“What I’m concerned about is that current government does not have a superficial respect for other political powers. There is no longer restraining force against its authority,” he said.

Opposition members are using recent events to compare the current president to the dictatorial legacy of her father, Park Chung-hee, an anti-communist strongman. From the 1950s to 1980s, he and two other dictators deployed the law to lock up pro-democracy activists, including one Nobel Prize winner. When South Korea transitioned to democracy, various right- and left-wing presidential administrations also used the law against opponents.

When she took office last February, President Park made attempts at historical reconciliation, meeting with former democracy advocates and attending a ceremony at a national cemetery for activists killed in a violent 1980 uprising in the city of Gwangju.

But in June, optimists were discouraged when prosecutors unveiled charges that the NIS systematically meddled in the presidential election,  via an online “psychological warfare” campaign — using social media to smear the left-wing candidate as a North Korea sympathizer.

There is no evidence that Park knew about the campaign or benefited from it. But the investigation has since expanded, netting the military’s cyber-warfare command and even suggesting that NIS agents posted some 20 million tweets during the election period. On New Years’ Eve, one protestor took his frustration to the extreme, dousing himself in gasoline and self-immolating with the demand that President Park resign. He later died of his burns.

By indicting political opponents on national security charges, the NIS is attempting to deflect the blame and “legitimize itself in the eyes of the public,” says Park Kyung-sin, a law professor at Korea University in Seoul. “I will not be surprised if NIS steps up the [national security law] charges, among other things, to divert public attention on the scandal.”

Others are not convinced, pointing to that contentious history of division. North-South relations have fallen to a nadir since Seoul accused North Korea of torpedoing a naval corvette in 2010, killing 46 sailors. The on-and-off threat of skirmishes, often unpredictable and erratic, keeps the desire for national security alive, some experts tell GlobalPost.

“You must understand what it’s like to have your nation divided for 60 years,” said one conservative commentator who asked not to be named, citing fears of cyber-bullying, a problem in South Korea. “There is a different context for all this. We are not a big nation, and we don’t have the guarantees of security that the Americans have.”