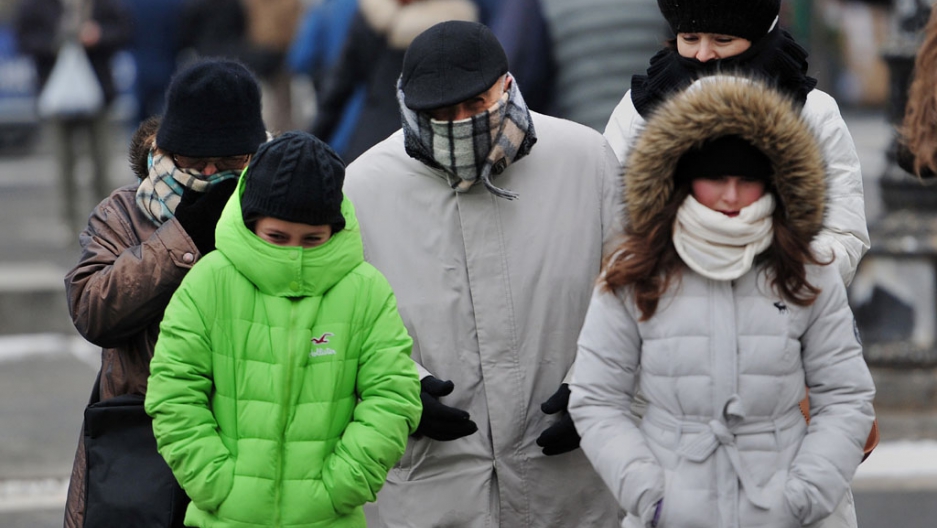 Pedestrians walk near Central Park bundled against the cold in advance of a winter storm on Jan. 2, 2014, in New York.
Credit: STAN HONDA
Share

There's a new weather phenomenon in town, and it's largely responsible for the record-breaking cold that left most of the US quite miserable Monday.

Twenty-six states were under wind-chill warnings or watches, with actual temperatures as low as 36-below zero reported in the Upper Midwest and wind chills as low as 60-below.

Meteorologists said a "polar vortex" was to blame.

Think of a polar vortex as a "polar cyclone," a great, swirling pool of extremely cold air located tens of thousands of feet in the atmosphere.

Here's what it looks like when the polar vortex expands to the US — http://t.co/oGsotOdRPG (Image: Living Earth app) pic.twitter.com/9gb37ewCXb

Though normally confined to the Arctic, this polar vortex is catching everyone's attention because it has dipped so low into North America — plunging millions of Americans and Canadians into a deep freeze.

NOAA scientists have suggested that climate change may be responsible for a weakening of the polar vortex.

"The last five years have been the warmest recorded period in the Arctic and climate conditions over the Arctic cannot be ruled out as influencing weather in some sub-Arctic regions," NOAA noted.

Freezing? Look up, here's why. Image Shows Entry of the Polar Vortex into the Northern U.S. http://t.co/C1zAYbv8cW pic.twitter.com/ttKsNwBokb

A similar phenomenon in 2009 drove temperatures in the Midwest down to 22-below zero.

The good news? This deep freeze won't be here for long.

Temperatures are expected to climb back into the sane range by Tuesday, with 30s and 40s forecast in many northern areas by the end of the week.

Hopefully, that means we will never have to see horrors like this again.

Or at least not for another few years: