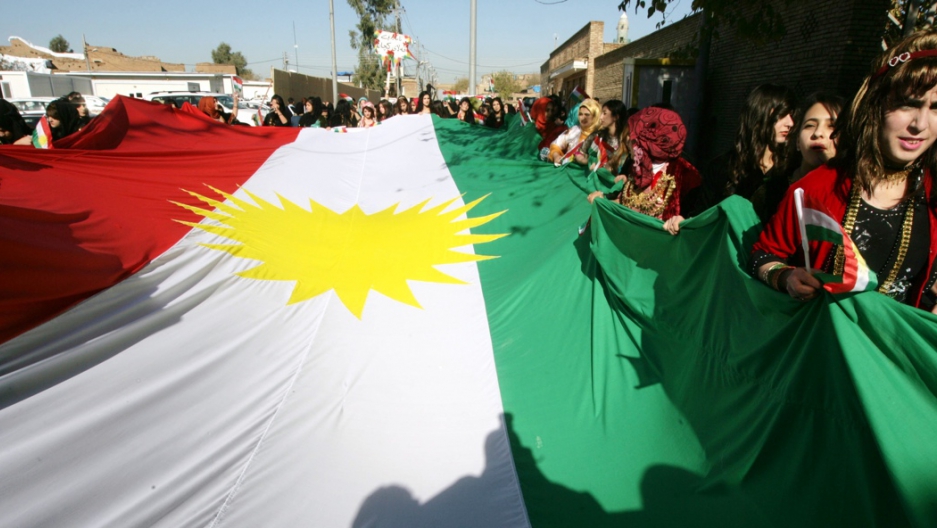 Iraqi Kurdish girls carry a large Kurdistan flag during the celebration of Flag day in the northern city of Erbil on Dec. 17, 2013.
Credit: Safin Hamed
Share

ERBIL, Iraq — As sectarian violence in Iraq reaches new heights and threatens to return the country to civil war, the semi-autonomous Kurdish north could be set to capitalize on the instability.

An estimated 6,818 people were killed in Iraq's violence last year, according to Agence-France Presse, making 2013 the deadliest year since 2008.

Rarely a day passes in Iraq without an attack adding to the body count.

“Maybe it will go to civil war,” said Jafaar Mustafa Ali, the minister of Iraqi Kurdistan’s armed forces, the Peshmerga. “Day after day, the violence can make it bigger.”

After a long history of subjugation at the hands of others, many of the Middle East’s 30 million or so Kurds spread across Iraq, Iran, Turkey and Syria dream of an independent state. In Iraq, where the Kurds have established the greatest level of freedom so far, the Kurdistan Regional Government is taking steps to lessen dependence on Iraq's central government. While pushing for greater autonomy, this does not necessarily mean agitating for independence, at least not now.

If the situation in the rest of Iraq decays further, the weakening of the central government could help the country’s Kurds gain the edge in longstanding territorial disputes and curtail Baghdad’s ability to counter pushes for greater autonomy.

More from GlobalPost: 49 steps to failure in Iraq, in one crazy chart

Under the Iraqi constitution, Iraq’s oil revenues are meant to pass through Baghdad with the Kurds allocated a 17 percent portion of profits based on the ethnic group’s population size. Right now, the Kurdistan Regional Government relies on that money for nearly all of its budget. But this could change in the near future.

A new oil pipeline between Iraqi Kurdistan and Turkey could bypass Baghdad and gives the Kurds an independent source of revenue. Oil began flowing through the pipeline this week, but is being held from world markets until a deal with Baghdad can be agreed upon, according to Turkey.

While much of Iraq has been trapped in continuous cycles of violence since the 2003 US-led invasion, the Kurdish north has been prosperous and largely sheltered from the bloodshed. In this protected enclave that has been under Kurdish control since 1991, the Kurds have established an entity that is a state in everything but name. Few here consider themselves Iraqi. Some even cover the word “Iraq” on their car’s license plates with stickers of the sun-emblazoned Kurdish flag. And when they look south, many see a failure of leadership in Baghdad that has sealed the fate of the country they are tied to.

“Iraq, at the moment, is a tragic failure sustained only by high oil prices” with a leadership “bogged down in sectarian and ethnic tensions” and a security apparatus “deeply mired in corruption,” he added.

“We want to be part of a federal, democratic Iraq, we genuinely do, that is in our interests,” he said. “But if [federal] Iraq moves decidedly in another direction, we will have to look at our options.”

While many of Iraqi Kurdistan’s officials echo Salih, publicly saying they want to continue their relationship with Baghdad despite longstanding disputes on oil revenues and land, many Kurds voice support for a split.

But forming a separate state isn’t necessarily high on their agenda.

While the central government’s attentions are currently focused on combatting a Sunni Arab insurgency, the Kurds are now also potentially able to assert more control over territory claimed by both sides, such as the oil-rich city of Kirkuk. Baghdad is “so distracted by insurgency that they have probably taken their eyes off of the disputed territories temporarily or at least partially,” said John Drake, an Iraq specialist with risk management firm AKE.

Last year the Peshmerga and central government forces were involved in several tense standoffs in disputed territories. In one incident, the forces clashed in the town of Tuz Khurmatu, leaving one dead.

The destabilization of federal Iraq is made even more threatening by the conflict’s growing relationship with the civil war raging next door in Syria. In recent months, once rare violence has arrived in Iraqi Kurdistan.

On Sept. 29, a series of bombs hit Erbil, killing six. The attacks were the first in six years to hit Iraqi Kurdistan’s capital and were claimed by the Islamic State of Iraq and the Levant (ISIS). Born out of Al Qaeda in Iraq, ISIS has gained notoriety in Syria for its effective, deadly attacks and strict implementation of Islamic law in areas it has captured.

In early November, two more alleged members of the Islamic State of Iraq and the Levant were arrested in Iraqi Kurdistan’s Dohuk province. Authorities there said the militants were preparing for suicide bombing missions.

In Arab Iraq, ISIS is much more active.

In the past week, ISIS captured the city of Fallujah, just 40 miles west of Baghdad, as well as parts of Ramadi.

“A dangerous dynamic is Syria and Iraq are merging into one theater of conflict with extreme sectarian polarization associated with it,” said Salih, the former Iraqi Kurdistan prime minister.