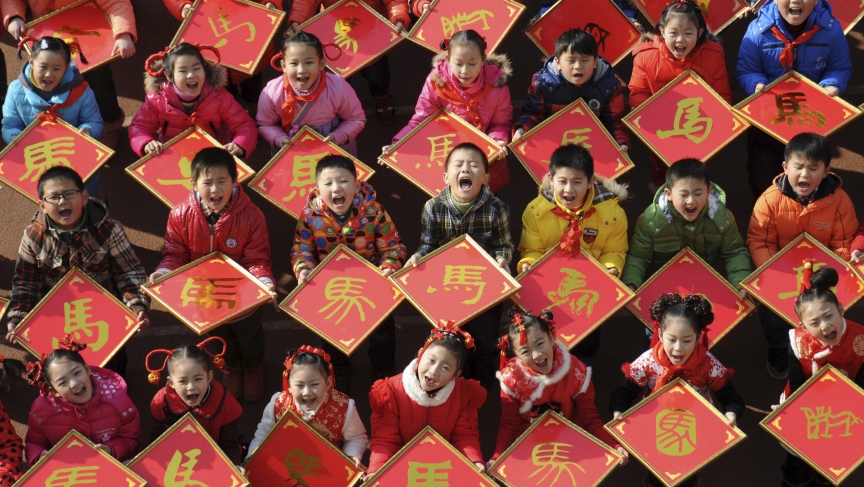 Children pose with their paper-cut works of the Chinese character for "horse", ahead of the Year of the Horse in the Chinese zodiac, at a primary school in Jiujiang, Jiangxi province, December 31, 2013.

As we look ahead to what will likely be the most important stories of 2014, it's a pretty safe bet that some of them will come out of China.

The Obama administration's Asia pivot is still playing out. Tensions have flared between China on one side and the US, Japan and South Korea on the other over disputed Pacific islands and China's new "air defense identification zone." There are also huge environmental problems in China.

What's likely to be the biggest China story this year?

President Xi Jinping. That's the short answer from both Kaiser Kuo and Jeremy Goldkorn. They produce the Sinica podcast, a weekly audio offering from Beijing about all-things-China.

"I think the big story is going to be Xi Jinping's continuing consolidation of power," Kuo said. And one important way that process will unfold, Kuo forecasted, is through "a real stepping up of aggressive measures to crack down on corruption in China."

But Goldkorn had a slightly different take.

"I'm not sure if I'm as optimistic as Kaiser about stepping up on efforts to clamp down on corruption," Goldkorn added. "But I certainly agree that the rise of Xi Jinping as perhaps the most powerful leader in the world today will continue.

"This is a man who intends to make his mark on the world," Goldkorn said.

One China story that attracted a great deal of attention from western news outlets at the end of 2013 was the rising tension between China and some of its neighbors, especially Japan, over a chain of disputed Pacific islands. China's surprise creation of an "air defense identification zone" that extended over the islands known as Diaoyu (in Chinese) or Senkaku (in Japanese) ruffled feathers in Washington, Tokyo and Seoul.

There is a risk of unforeseen consequences here, Kuo said. But things are calming down now. "I'm cautiously optimistic about it," he said.

"Despite the screaming headlines," Goldkorn added, "cooler heads will probably prevail both in the United States and in China. And in Japan. I don't see that, in 2014, anybody has it in their interests to make trouble in this region."

As for the Obama administration's much ballyhooed Asia pivot, the Chinese view this particular US policy as an attempt to contain China. But Kuo said he would know containment if he saw it, and "this is not containment."

"Still, it was poorly branded," he added.

Kuo questioned the wisdom of the US rolling out a new emphasis for American foreign policy alongside a decision, for example, to deploy US Marines to the region.

It's hard to say what's ahead in 2014 for this stated US goal of rebalancing toward the Asia Pacific, Goldkorn said.

"I don't think there's a lot of certainty from the American side [about] what the pivot means anymore," he said. But one thing the US will have to get used to, Goldkorn added is that, "China is going to be a more robust actor in the Pacific Ocean.

"China's made it quite clear that that is what they intend to do. And I don't think anything the United States does will be able to stop that," he said.