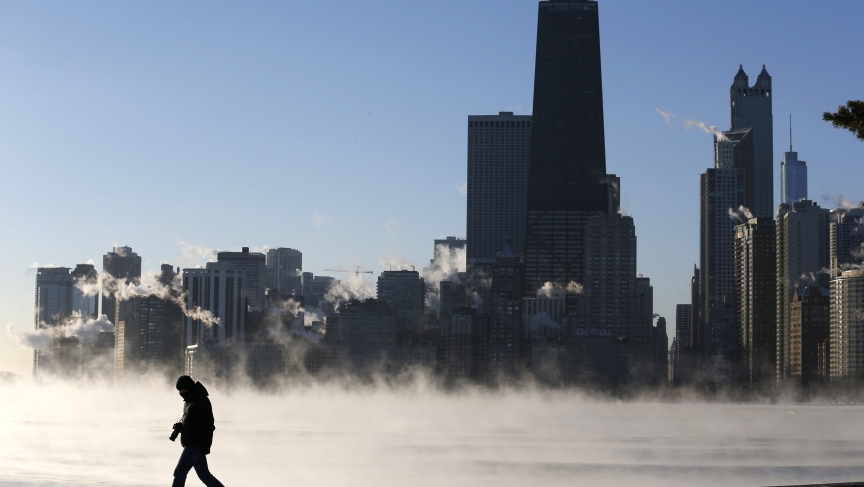 A man is silhouetted against condensation rising off of Lake Michigan in Chicago on January 6, 2014. Chicago was experiencing historic cold this week.

Well, not quite that cold at The World's studios in Boston — yet.  While it's hovering around a balmy 50 degress along the eastern seaboard, the Midwest is already experiencing what's being called the coldest temperatures some places have seen in two decades.

Journalist Eric Holthaus lives in Wisconsin, one of the colder places in the country on Monday. To demonstrate how cold it was, he boiled a bowl of water, went outside and threw it in the air. Voila, instant snow, as the boiling water instantly transformed.

"I wouldn't have believed that it would have worked until I saw it with my own eyes," he said.

And for this, we can thank a weather feature known as a polar vortex — a sort of monstrous draft of cold air that would normally be bottled up over the North Pole but that's dropped down over the midwest United States. But Holthaus says these frigid temperatures may actually be attributable, on a macro level, to global warming.

While it might seem somewhat counterintuitive that a warming planet would unleash frigid temperatures, there's a theory, he says, that melting Arctic ice is shifting the jet stream further north and making it "weaker and wavier."

"[That's] making it more likely for one of these waves to become super elongated and pull cold air as far south as we're seeing," Holthaus says. "If the mechanism behind the jet stream is weakening — the differences in temperature between the poles and the Arctic — [if it's] decreasing a little bit, if you believe meteorological science, the jetstream should weaken and all these effects should happen."

Of course, it's hard to attribute any one weather event to global warming — there have been heat waves and cold spells since time began — but some scientists suggest the extremes may become more common, or more pronounced. For now, Holthaus is bundling up and staying warm. And he's moved his new flock of chickens into his basement so they can stay warm, too.