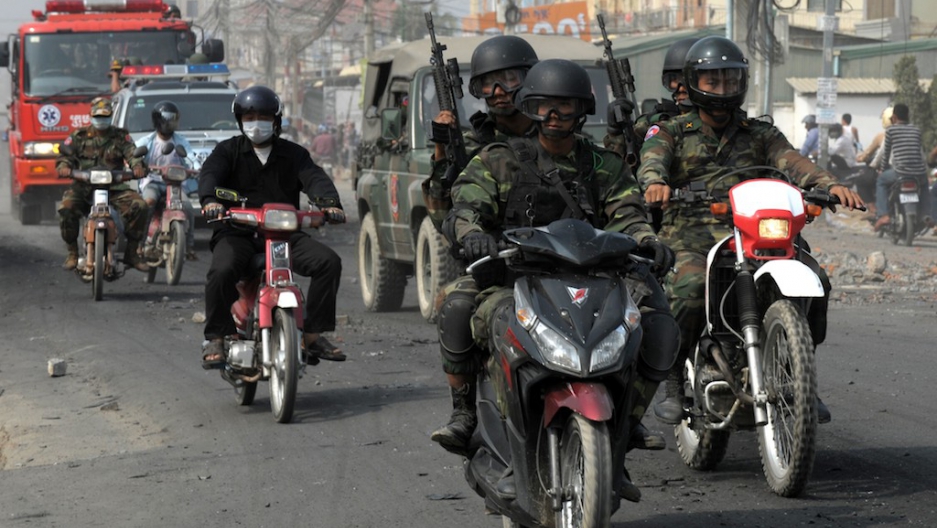 Cambodian soldiers patrol along a street in Phnom Penh on January 4, 2014. Cambodian authorities dispersed opposition protesters from their rally base in the capital and halted further protests against the kingdom's strongman premier, a day after police launched a deadly crackdown on striking garment workers.
Credit: Tang Chhin Sothy
Share

BANGKOK, Thailand — In Cambodia, garment workers who stitch the jeans and hoodies that hang in American closets are demanding a raise. Instead, they’re receiving beatings and bullets.

In the past decade, clothing tagged “Made in Cambodia” has grown increasingly common in the malls of America. Shoppers who peel back lapels in H&M, The Gap, Urban Outfitters and other outlets will find many items sewn in the troubled Southeast Asian nation’s factories.

But this booming industry is now in crisis.

Rallies for pay hikes have descended into chaotic scenes in which protesting Cambodians, some armed with sticks and Molotov cocktails, have been shot dead by government forces with AK-47s. The death toll stands at four with nearly 30 injured, according to the Cambodian NGO Licadho.

Images of protesters pummeled and soaked in blood have circulated on Cambodians’ Facebook pages. Districts in the capital of Phnom Penh where garment stitchers work and live are now patrolled by Cambodia’s military, which is enforcing a ban on assembly.

Many factories are closed after workers have fled the city to their home provinces, said Mu Sochua, an activist and parliamentarian-elect with the nation’s opposition Cambodia National Rescue Party.

“The workers are now hiding. They’re living in fear,” Mu Sochua told GlobalPost. “Do you want to wear clothes made by people who live in fear?”

The striking workers’ primary demand is a raise. They want $160 per month — a near doubling of the current typical payout. The government has offered to raise the minimum wage but not beyond $100, a salary many workers deride as too low to cover rising costs of food, schooling and medical care.

“With the wages they get today,” Mu Sochua said, “they can’t even get three nutritious meals in a day.”

Stitching blouses and T-shirts for the West — namely America, the top destination for “Made in Cambodia” clothes — has helped transform the nation’s economy. According to the International Labor Organization, garment stitching is the country’s “largest industrial sector” employing 400,000 workers and accounting for $5 billion in annual exports, 35 percent of GDP.

Economists call the garment industry a “first rung” on the ladder from farm-based society to industrialization. Sewing jeans in a hot factory is dull and exhausting. But for many, particularly uneducated women born on farms, it is preferable to toiling in sun-baked rice paddies. Foremen may be fickle and cruel but so is nature.

Western clothing conglomerates favor Cambodia for the same reasons they like countries like Vietnam and Bangladesh. All are poor enough to provide a large pool of people who’ll work long hours for little money. But they’re not as unruly as, say, Somalia or Sierra Leone, where the chaos is so thick that trucks and ships can’t effectively get shipments to market.

Meeting the workers’ $160-per-month demand probably wouldn’t price multinationals out of Cambodia, said David Birnbaum, an Asia-based American garment industry consultant and five decade veteran of the trade. That wage is still competitive with China’s provincial minimum wage ($141) and that of the Philippines ($177).

Part of the blame for Cambodia’s raucous strikes, he said, can be laid upon Cambodia’s unions, which have failed to secure ample wage hikes for workers through negotiations.

“This is because the Cambodian union system is corrupt,” Birnbaum said. “The factory management will take union leaders and say, ‘I think you should take a course in management. The course, by the way, is in Paris and lasts three years.’ They just pay off union leaders instead of paying the workers.”

“When unions don’t do their job,” he said, “people just go out on the street.”

The protesters’ brutal handling by Cambodian cops and troops is lamentable.

But it’s not entirely surprising.

Practically all of the country’s institutions — from courts to police — are dominated by a single party helmed by a strongman premier, Hun Sen, who has controlled Cambodia for 28 years. With Middle Eastern leaders such as Libya’s Muammar Gaddafi and Egypt’s Hosni Mubarak deposed during the Arab Spring, he is now among the world’s longest-running non-royal heads of state.

Hun Sen has little patience for dissent. Asked if he might fall as did Arab Spring dictators in 2011, the premier is quoted by Human Rights Watch’s Asia director, Brad Adams, as saying, “I not only weaken the opposition, I’m going to make them dead ... and if anyone is strong enough to try to hold a demonstration, I will beat all those dogs and put them in a cage.”

Despite his dictatorial style, since the early 2000s Hun Sen has presided over a period of relative stability by Cambodian standards. Those, standards, however, are anything but typical. The country’s 20th-century history is a litany of massacres, starvation and foreign occupation.

In recent decades, Cambodia has suffered perhaps more than any other nation except for North Korea. During the US-Vietnam War, American bombers dropped more bombs by tonnage into Cambodia (then a haven for Viet Cong guerrillas) than all Allied Forces aircraft dropped during World War II.

The ensuing chaos gave rise to the Khmer Rouge, a hyper-communist regime that controlled Cambodia from 1975-1979. This violent revolution led by the infamous Pol Pot sought to remake society into a peasant utopia through brute force.

The result: nearly 2 million dead from starvation, killing and forced labor. Hun Sen, now 61, was a Khmer Rouge battalion commander who defected to help lead an invading Vietnamese-installed government that ran Cambodia from 1979 until the late 1980s.

Any future negotiations between the garment strikers and the government are complicated by the fact that protests are now aligned with Hun Sen’s major opposition: the Cambodia National Rescue Party. The political faction is actively protesting July 2013 elections that, according to party leaders, relied on fraud to nullify its rightful victory.

The party has co-opted the garment strikers’ campaign. The government, as the Phnom Penh Post reports, has since portrayed the strikers as a “group of anarchists” that have “used violence, burnt private property, intimidated investors ... and threatened to set fire to factories.”

The International Labor Organization has warned protesters that “violence and destruction of property are not legitimate tools of industrial action,” a Britishism that loosely translates to non-violent striking. During protests last week, bonfires and hurled stones heightened tension in police-patrolled factory zones in Phnom Penh.

“But you have to look at proportionality,” Mu Sochua said. “What is proportional between rocks — or even Molotovs — and AK-47s?”

“Now it’s totally confrontational,” Birnbaum said. “It’s a very complex and unfortunate situation. And it’s a shame because Cambodia is a poor country that has the potential for a very solid industry.”

But Mu Sochua, one of the opposition’s leading voices, insists the factory workers’ demands fit in with a louder chorus of voices demanding the end of Hun Sen’s rule. Roughly half the country’s GDP is supplied by foreign donors — including the US — and their aid, she said, is wrongfully propping up his regime.