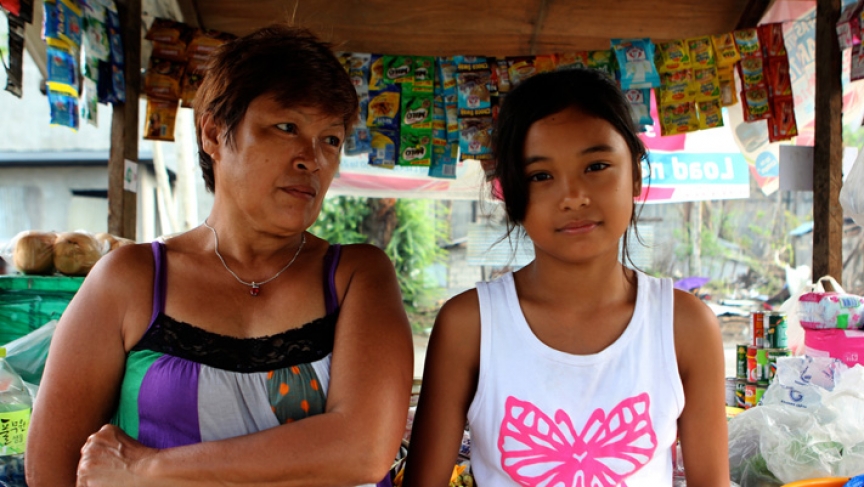 Delma Yerro, 53, stands with her granddaughter, Heavenly, at their sari-sari store in Tacloban, Philippines.

Delma Yerro and her granddaughter, Heavenly, run a small sari-sari store by the side of the road in Tacloban.

In the Philippines, sari-sari stores anchor a neighborhood. They are small, family-owned shops that sell daily necessities, such as coffee, laundry soap, toiletries and snacks. But they're more than convenience stores. They also serve as gathering places where people chat and exchange news of the neighborhood while they finish off a soda or drink a few beers.

That's why, in the months since Typhoon Haiyan devastated Tacloban in early November, people have tried to rebuild these neighborhood institutions.

Yerro says for two weeks after the typhoon, she was too traumatized to do much of anything. But describing herself as a workaholic, she says she eventually needed to get back to work. Using boards and corrugated tin she salvaged from her ruined home, Yerro cobbled together a tabletop and a makeshift kitchen.

“I don't know how I could build again. I really need help,” she says.

She rinsed off some of the goods she managed to save from the storm and began selling again. On her table, she has canned sardines, instant noodles, packets of powdered milk and shampoo, and a few pots of cooked food.

Yerro says she misses her old routine and it hurts her to think about how hard it will be to get it back. Before the storm, Yerro had a coin-operated Internet café, a small eatery and a full sari-sari store. Her regulars were her neighbors and the workers at the seaweed processing factory across the street.

“It was a profitable business and a good life,” she says.

Now, the business is a fraction of what it used to be. Many of her customers have left and others died in the storm. Everyone is struggling.

Yerro says the prices at her market are high. She feels bad, but says she has no choice. She has to charge more, sometimes just to break even. Some of her regular customers ask her for small loans to buy food. She used to do that before the storm, but she can't afford it now.

Yerro and the hundreds of other small sari-sari store owners in Tacloban are the last link in the city's retail supply chain.

“That entire chain pretty much has been destroyed,” says Mark Ruiz, who runs an organization called HaPinoy, which is trying to help sari-sari stores recover from the storm.

Ruiz says many of the small stores are selling looted goods or items brought in from far-away cities — which means high prices.

“Just to give you a quick benchmark, a six peso sachet of coffee is selling for around ten pesos. So that's almost double,” Ruiz says.

That's only 22 cents for a single serving, but it adds up for those Filipinos who don't make much anyway.

Ruiz says to get the retail chain working again, they have to restore security and infrastructure every step along the way. Distributors are still reeling from the stock they lost in the looting. Delivery vehicles were destroyed and need to be replaced. Public markets and warehouses need to be repaired. And the sari-sari store owners, who live on small margins in the best of times, need loans and financing. Right now, most of them are barely scraping together enough capital to make a profit.

And as the delivery of relief goods starts to wind down, sari-sari stores will have to resume their role as the neighborhood's pantry.