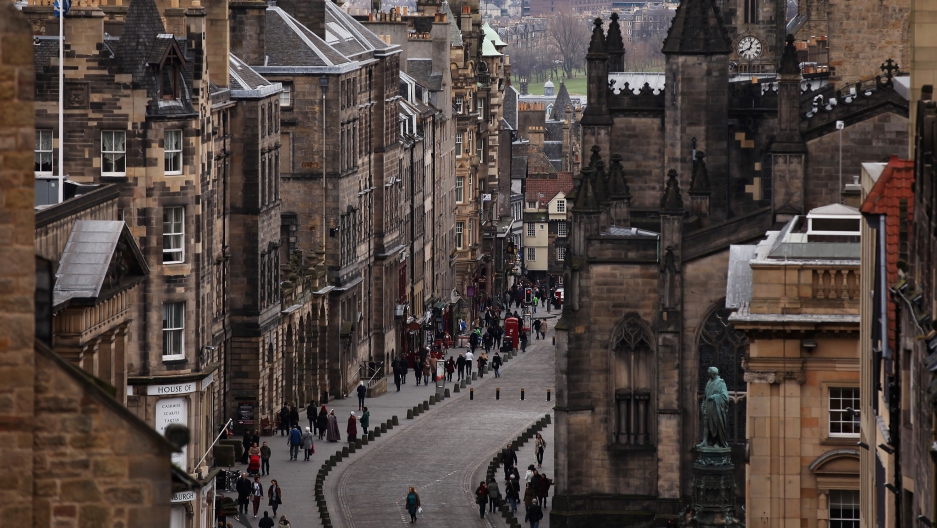 EDINBURGH, Scotland — In the United States, where drinking alcohol in public is prohibited, police routinely turn a blind eye to people sipping from bottles wrapped in brown paper bags.

A similar system has existed in the Scottish capital for almost three decades, but for a different vice.

Nestled alongside tourist shops and bars on the cobbled streets of Edinburgh’s picturesque medieval Old Town, the city’s “saunas” aren’t hard to spot. Inside their colorful facades, sex workers ply their trade.

Saunas are regularly inspected by the authorities, who have an unwritten agreement not to ask too many questions about what goes on there, an unorthodox approach that began in the early 1980s as a response to an epidemic of Hepatitis B and later HIV.

“It’s been an open secret that the saunas were places where sex was sold,” says Neil McCulloch of Scot-Pep, an NGO that represents sex workers. “But that’s not how they were licensed. They were licensed as places of entertainment.”

However, that policy may be facing an abrupt end.

During the summer, police began mounting raids on saunas across Edinburgh. They seized condoms as evidence and arrested alleged sex workers and proprietors.

In mid-December, a month-long public consultation closed on proposed changes to licensing laws that could effectively see the saunas criminalized.

The city council is now expected to scrap licenses for the city’s saunas and massage parlors in the spring.

After holding a permissive view of sex work for more than two decades, the council and the city's police chiefs now say the policy carries “reputational and financial risk” for a popular tourist destination with a globally recognized program of summer festivals.

“This has become a toxic issue for the council,” McCulloch says.

He thinks that’s a bad development.

He says the saunas are a clean, discreet and, most important, safe place for prostitutes to work.

“This has been very successful and it’s something that we were admired for and recognized for on an international basis,” he says. “Now this pragmatic approach is being dismantled.”

“Unless you lived next door to a sauna that painted itself lime green, you wouldn’t have known it was there,” she said in an interview. “This was something the citizens of Edinburgh were willing to trust their politicians, police and medical professionals with. They were willing to do that on the basis that it worked.”

Sex-work campaigners say prostitutes could be forced back onto the streets or to operate in illegal, unlicensed premises with clients found online, which would expose them to violence and exploitation.

Police officials, who recently called for condoms to be banned in saunas, are “using a sledgehammer to crack a nut,” she says.

The closure in 2010 of a “tolerance zone” for sex work in the Edinburgh suburb of Leith led to a “1000 percent” increase in attacks on women there, she adds.

Tom Wood, a former deputy chief police constable in McDonald’s Lothian region who was involved in implementing the original policy, says looking at the issue “principally through a criminal justice lens is wrong.”

“The whole policy was framed principally with public health in mind and it's the public health question that needs to be answered, as well as the criminal justice question,” he said.

Although Scotland has a history of religious conservatism, the new crackdown in Edinburgh is being championed primarily by radical feminists who argue that sex work is bound up with trafficking, exploitation, violence and slavery.

The European Women’s Lobby, the largest association of women’s groups in the European Union, has called for a complete ban on prostitution across the continent.

More from GlobalPost: Europe in 2014: the return of politics

There’s been a backlash against sex work elsewhere in the UK. Earlier this month, police raided clubs and sex shops in London red light district of Soho.

In Northern Ireland, the Democratic Unionist politician Lord Morrow has called for the devolved assembly to follow the “Swedish model” of criminalizing the purchase of sexual services, which are not considered work.

“The reality is that most women who work in the saunas will continue to sell sex,” he says. “Taking them out of the licensing regime will disperse them to more hidden venues, where it will be much harder for state services to reach them.”