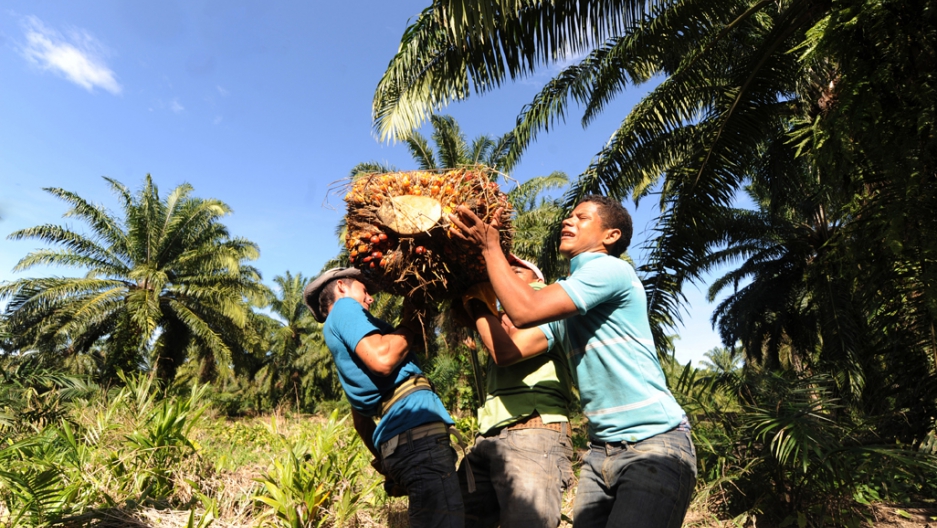 WASHINGTON — A recent political coup. Drug trafficking. One of the world’s highest murder rates. With attributes like those, Honduras may not sound like an easy sell for international investment.

But that hasn't dissuaded the World Bank, whose mission is to encourage development in the countries that need it most.

The bank’s private lending arm, the International Finance Corporation, is spearheading several multimillion-dollar projects in Honduras, one of the poorest countries in the Americas. However, some are questioning whether the money is doing more harm than good.

Human rights groups accuse the IFC of ignoring warnings that its funding for the Honduran palm oil industry is helping fuel a deadly land conflict that’s turning the fertile Aguan Valley near the country’s northern coast into a virtual military zone.

Farmworkers say they’ve been forced off land that’s mostly taken up by oil palm tree plantations. The controversy is casting doubts about whether the bank and its 182 member countries can respect their own code of ethics while doing business in politically unstable, corrupt societies.

Concerns about the social and environmental impacts of the IFC’s investment in Honduras have triggered an internal investigation that activists are anxiously awaiting.

Hondurans describe a state of terror in the Aguan Valley, according to testimony recorded by Rights Action, the International Federation for Human Rights and other advocacy groups. They say police, military and landowners’ security forces are working together to blockade roads, burn farmers’ homes and hunt down, torture and murder land activists, lawyers and journalists.

At least 92 people have been killed in land disputes in the Aguan Valley between 2009 and 2012, most of them land activists, according to the country’s human rights commissioner.

At the heart of the issue is the IFC’s client, Corporacion Dinant, an African palm oil and food giant run by one of Honduras’s most powerful men, Miguel Facusse.

Although Facusse says he’s committed to the community’s welfare, human rights groups accuse the 89-year-old and his security forces of possible crimes against humanity related to the killing, kidnapping and forced eviction of farmers in one of Central America’s bloodiest recent agricultural conflicts.

Some of the allegations came in a submission to the International Criminal Court.

Dinant spokesman Roger Pineda rejected accusations the company’s security forces have been involved in violence against anyone claiming rights to Facusse’s property.

“The most common incidents in which violence have taken place have always been against our security personnel during the trespassing events against our properties by the invaders that always carried heavy weapons such as AK-47s to perform the illegal invasions,” he said.

“It’s basically like a war zone,” she says. “And there’s an absolutely non-functional justice system.”

World Bank President Jim Yong Kim recently acknowledged the concerns in a rare statement that pledged an action plan to respond to the findings of the internal investigation. However, he was short on specifics and did not say when the audit would be published.

The audit has been in the works since April 2012, when the World Bank’s internal watchdog, the Office of the Compliance Advisor Ombudsman, said it would look into whether the IFC’s funding had negative social or environmental impacts on and around Dinant’s plantations.

The resulting inquiry revealed the IFC was involved in an elaborate funding program that kept millions pouring into Dinant even after the bank registered concerns about the violent land conflicts.

Internal IFC documents quoted in the watchdog report show the IFC characterized Facusse in July 2010 as a “very respected businessman” and said nothing about the violent land conflict.

Nevertheless, the IFC held back the second half of a $30 million loan to Dinant in mid-2010 following violent clashes over land in the Aguan Valley.

In December 2010, the IFC urged Facusse to use restraint after the Washington-based group Rights Action sent a letter to the World Bank calling the situation a “human rights disaster” and accusing the financial institution of “gross negligence.”

But that didn’t stop the IFC from approving a $70 million investment in one of Dinant’s major lenders, Banco Financiera Comercial Hondurena (Ficohsa), the following May. It gave the IFC a 10 percent stake in Ficohsa — increasing the IFC’s exposure to Dinant — and enabled the Honduran bank to loan millions more to the troubled palm oil company.

Those circumstances triggered calls for a second investigation the CAO has promised will examine “Ficohsa’s significant exposure to Dinant and other potentially high-risk sectors and projects.”

The US-educated son of Catholic Palestinian immigrants and uncle of a former Honduran president, Facusse evicted the farmers and indigenous community using private security forces with the help of the military and police.

The land conflicts worsened after a July 2009 coup d’etat overthrew the left-leaning President Manuel Zelaya. He was forced out of Honduras days after visiting the Aguan Valley, scuttling a controversial land-reform effort that rural farmers had celebrated but the country’s economic and political elites opposed.

Confidential US diplomatic cables released by WikiLeaks indicate the coup was backed by powerful figures including Facusse, whose plane transported Zelaya’s foreign minister out of the country.

Dinant spokesman Pineda said Facusse didn’t know about the plane’s use during the coup until the following day. He said the pilot, summoned by the air force, “did not use his best judgment and should not have participated in such acts.”

The IFC’s critics say problems often arise because more than half of its global lending portfolio is handled though financial intermediaries. The “hands-off lending” creates problems because the IFC “doesn’t have a clue” about what happens to its money, Chowla says.

“There’s very little transparency on the side of the financial institutions in what they’re investing in,” he said in an interview. “Taxpayer money from around the world is financing what ends up in many cases with negative results.”

The World Bank has declined to comment on what ethical standards the IFC has applied to its investments in Honduras until the internal investigation into Dinant is published. However, an IFC spokesman admitted the group is concerned about the land disputes.

“We have been in close contact with Dinant since 2010, when the land occupations began, and have worked with the company to improve its policies and practices, particularly in security and community engagement, in an effort to address the more volatile security environment,” the spokesman, who asked not to be named, said in an email.

Regarding Ficohsa, the spokesman said the IFC has supported the Honduran bank since 2008 in order to help expand its lending to small- and medium-sized enterprises.

“Our work through financial intermediaries provides much-needed access to finance for millions of individuals that we would never be able to reach directly,” the spokesman said.

Although human rights groups suggest World Bank and IFC officials have lost their moral compass in Honduras and other developing countries, insiders say the issue is more complicated because it’s far from clear what actions to take in corrupt societies.

Katherine Marshall, who worked on international development for the World Bank for 35 years, says it operates on the assumption that it’s possible to make changes from within institutions.

“There’s a whole level of cocktail party discussions about who’s corrupt and who’s taking payments,” she says. “But if you don’t have evidence, it’s difficult to operate on that if you’re an external partner.”

Now a senior fellow at Georgetown University’s Berkley Center for Religion, Peace and World Affairs, Marshall says international finance groups must weigh the costs and benefits of taking on each client.

“You don’t want to be naive and stupid, but if you’re involved in these countries,” she says, “you’re missing a major point if you’re not ready to have a discussion about the dark side.”

“You have a cancer and you have to treat it,” he said. “And by the way, we know it’s treatable. If you don’t treat it, it’s malpractice on our part.”

But Rights Action’s Bird says the Aguan Valley’s farmers are tired of such abstract talk. They want the IFC to stop funding Dinant directly and indirectly.

“If international investors were held responsible for the consequences of their investments,” she says, “it would go a long way in putting a rein on some of the abuses.”