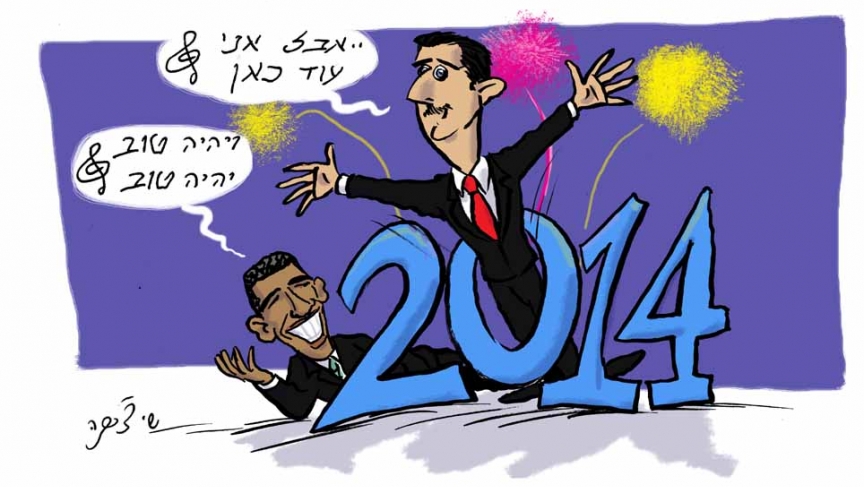 A New Year's cartoon from Israel's Shay Charka. President Obama is saying "It will be a good year" and Syria's Bashar al-Assad is saying "But I am still here." The cartoon is based on a famous Israeli song.

We live in an ever-widening world. But it’s not just the developed world that needs to lay off the fried food.

According to new figures, the number of overweight and obese adults in developing countries has ballooned from some 250 million to almost a billion. The BBC has been examining a trend that has seen one-in-three adults around the world become obese. The rates are rising most dramatically in places where incomes are also climbing, places like Mexico and even Egypt.

The regions of North Africa, the Middle East and Latin America saw large increases in overweight and obesity rates to a level on a par with Europe, around 58 percent.

And what does your vagina say?

“My vagina says, I need respect”

The Economist reports on a unique social media protest in China — the "My vagina says" movement. In a society where open discussion of sexuality is still taboo, the movement has given voice to dozens of women across the country protesting against sexism and sexual harassment using the phrase "my vagina says." Started by a small group of students holding up marker board with quotes "from" their vagina, the movement quickly moved into the mainstream. Even the normally staid state-run media reported on it and a photo gallery on a Chinese web portal drew 2.1 million views.

What happened to a musician's rare bamboo flutes?

When is a rare and expensive musical instrument not a rare and expensive musical instrument? Perhaps when it’s an "agricultural item." Foreign Policy has a convoluted story of how flute virtuoso Boujemaa Razgui lost his 11 rare bamboo flutes. Initial reports were that US Customs and Border Patrol agents had seized and destroyed the flutes, worried about allowing rare plant pathogens into the country. But, subsequently, customs officials said they only seized fresh bamboo from the musician's luggage — and not any flutes. If that's true, what happened to Razgui's flutes from when he checked in his baggage to when it was delivered to him?

PRI's The World looks at the growing global popularity of a previously underestimated dog breed — the Hairless Peruvian, long regarded as one of the ugliest breeds on the planet. These hairless dogs have been in Peru for thousands of years. But just a few decades ago, they were in danger of dying out. Then a local breeder launched a campaign that made them popular again. We warn you — this story may well expose you to high levels of canine cuteness.

"Nobody lives here, and nobody visits for long. Even the looters have stopped bothering."

There is always a strange fascination to ghost-towns. Simon Tisdall has been exploring one of the newest ghost towns in the world for The Guardian — the abandoned Japanese town of Namie, polluted by the Fukushima power plant disaster of three years ago. Tomioka, Okuma, Futaba have also been abandoned, left to wild animals and weeds. No one is expected to return to the worst contaminated areas before 2017 — at the earliest.

The hit British show Sherlock returns to global audiences in just weeks. And among those eagerly awaiting its return are a bunch of devoted fans in China. Sherlock returned in the UK on New Year's Day. Within hours, millions in China had watched it online. PRI's The World looks at the Chinese reaction to the series, including the slew of fan fiction, known as slash fiction or "danmei," it has inspired. Danmei is a Chinese word to describe fiction and fan fiction about two characters of the same sex in a romantic situation.

How MI6 and Margaret Thatcher flipped out over a punk band's spoof recording http://t.co/7vup6Yntuz by @jimwaterson via @dcbigjohn

It was a scorcher in South Australia on Thursday. In Moomba, the mercury climbed all the way to 121 degrees Fahrenheit, just two degrees shy of the city's all-time record of 123 degrees, according to AccuWeather. The previous record was set 54 years ago to the day.