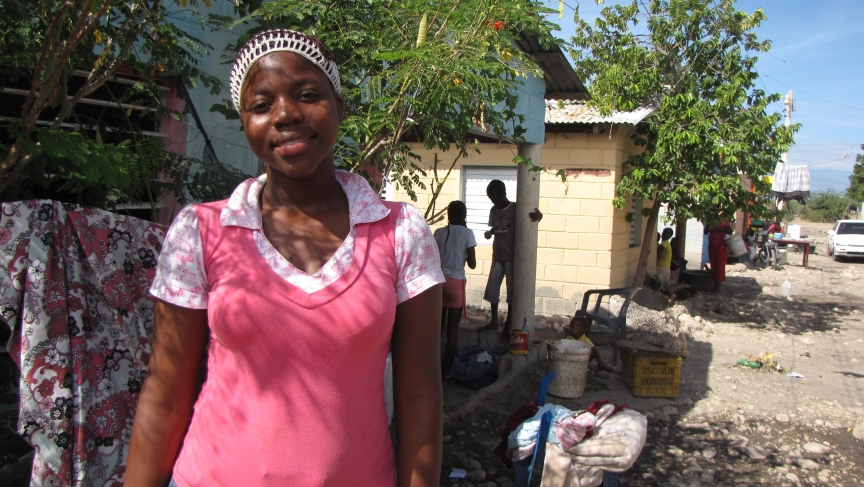 Betzeida Perez Pierre was born in the Dominican Republic, as were her parents and their parents. Now she can't attend a university there because her Dominican citizenship has been canceled.

For all the debate in the US over immigration policy, there is one basic tenet of American law: if you are born here, you are a citizen.

That used to be the case in the Dominican Republic, as well. But last September, the country’s Constitutional Court declared that all those born after 1929 to undocumented immigrants are also considered illegal residents, and so are their descendants.

The Dominican government has already begun to cancel the citizenship of thousands of one-time Dominicans. Most of them trace their roots to the DR’s poorer neighbor, Haiti.

Many Dominicans of Haitian descent live in bateyes — century-old communities comprised largely of migrant workers and their children. The Dominican Republic has several bateyes, known by their numbers. Batey Ocho (or eight) is a small cluster of wood and cinderblock houses. It’s where 17-year-old Betzeida Perez Pierre was born and raised, as were her parents and their parents.

Her great-grandparents came over from Haiti to work on Dominican sugarcane plantations, but, gradually, members of her family found other opportunities. They’ve gotten an education and integrated into Dominican life.

Her father became a teacher, and is now mayor of the municipality of Batey Ocho. Betzeida finished high school this year, and she seems poised to follow her father’s path.

She wants to study education at a university, perhaps to teach literature and history.

But there’s a problem.

"One of the requirements to enroll in university is having your identity card — proving your citizenship," Betzeida explains. “When I went to get it from the authorities, with all my required documents, they told me to come back later. So I waited, and waited, and waited more. Finally they told me my ID card had been canceled.”

Betzeida has never been to Haiti, and the only language she speaks is Spanish. No matter. The Dominican Constitutional Court has declared that Betzeida, along with thousands of others, is no longer a Dominican citizen.

Betzeida’s ancestors didn’t exactly sneak across the border. Her father, David Perez, says they immigrated under an early 20th century contract between the Dominican and Haitian governments to provide cheap labor for the Dominican sugar plantations.

The contract was for the cane-cutting season,” says Perez, who has researched the subject with other local leaders. “At the end of it, the Dominican government was supposed to send those workers back to Haiti. But it never did. So those migrants were allowed to stay and go to work picking coffee and other crops. Then they came back to this area when the cane-cutting season started again.”

Perez says many of them got citizen ID cards and registered their children as Dominican.

Now, as mayor, Perez is hearing a lot from constituents about their fears about the court decision.

"When your ID card is canceled,” he says, “there are other things that get canceled — your bank account, property titles, car titles, house titles, agricultural contracts. All of those are based on one's identity. So that's why people are so worried.”

But to defenders of the court decision, revoking the legal status of the descendants of Haitian migrants is completely justifiable.

Alexander Florian Medina, an attorney in the city of Barahona, says he has sympathy for Haitian immigrants. After the earthquake, he helped some Haitians fight deportation. Still, he supports the recent Dominican court decision.

“When you’re born to illegal immigrants,” he says, “that means you were born illegally here, so it’s normal that you be considered as illegal as your parents or grandparents.”

Medina points out that those with canceled documents are allowed to apply to regain their legal status and citizenship. But to long-time residents of Batey Ocho, this seems absurd.

Nununa Enecia still lives in Batey Ocho, where she was born 82 years ago to a Haitian mother. She takes issue with Dominicans like herself being treated as foreigners.

“For those of us who were born here, what are we supposed to do?” she says. “Go to Haiti? Where are we going to go? The authorities are happy to have people come over here and work. But then, when they see fit, they gather us up like a heap of trash and send us away.”

All four of Enecia’s siblings died in infancy because there was no medical care in the batey. She never learned to read or write, but she put her children through school by selling propane for gas lamps. Her son Beneco went to university, became the first mayor of Batey Ocho, and then founded a sustainable development organization that operates in the bateyes.

Beneco said he pursued his education in part to show other batey youth that it was possible to make it in Dominican society.

He couldn’t have imagined how much the rules of the game would change.