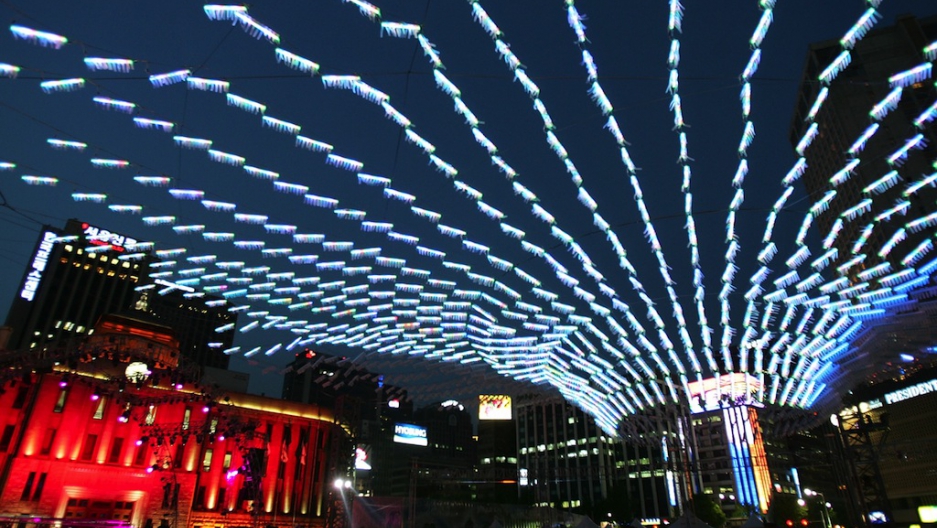 The Hi Seoul Festival, in Seoul, South Korea, draws throngs from around the world, in May 2008. Seoul is increasingly eclipsing Tokyo as the city of the future.
Credit: Chung Sung-Jun
Share

SEOUL, South Korea — After a week or two in the South Korean capital of Seoul, newcomers often harbor extreme views on the city. They either love it or absolutely despise it.

The first cohort can’t get enough of this Asian metropolis of almost 10 million people. They find endless fun in its pulsating nightlife, surfeit of palaces and temples, and cheap vodka-like booze called soju. Hiking up its peaks (yes, Seoul has peaks), they are mesmerized by its never-ending skyline.

As for the less-enthusiastic crowd, they tend to focus on the preponderance of Kentucky Fried Chicken knock-offs, bland, blockish apartment buildings, and the chaotic, almost nonsensical street system. In 2010, Lonely Planet readers declared the city their third least-favorite in the world, complaining that Seoul, well, lacked soul.

Whether or not visitors fall in love with the city, it’s undoubtedly one of the 21st century's vital urban centers — worth a second look, or even a three-year stay, as your correspondent has endured.

And here’s why: At the turn of the century, science fiction writer William Gibson prognosticated that Tokyo was the city where the future happened. Now, Seoul is increasingly taking its place, as a popular local blogger points out.

It’s renowned for its blazing fast mobile speeds. And like Tokyo 20 years ago, it’s the place where the technology for your refrigerator, smart phone, microwave and washing machine might have been thought up. The city was a setting in the 2012 sci-fi epic Cloud Atlas, re-fitted as the post-apocalyptic dystopia called “neo-Seoul.”

Modern Seoul is a relatively recent success story, leading to the cacophonous conflict between old and new that adds to its intrigue, say experts. “Seoul is truly a city of past, present and future,” opines Cho In-souk, principal at the DaaRee Architect and Associations. “Some like it, some don’t like it. Sometimes it’s dirty and noisy. But it is a city of hope, a city that’s alive.”

She points to the charm of its eclectic mixture of centuries-old palaces and fresh new high-rises.

GlobalPost recently spent the better part of a week soaking up the ambiance and admiring the architecture. Here are some of our favorite sites.

In the “Republic of Samsung,” as South Korea is jokingly known, the nation’s massive tech conglomerate makes just about everything from chips to ships, comprising one-fifth of the economy and employing nearly 400,000 people worldwide.

Through its nonprofit foundation, the business empire even runs a group of beautiful museums showcasing rarified Korean and global works.

Step inside the Leeum, Samsung Museum of Art's sleek complex and you might fall in love with its three buildings just as much as its artwork. Each was designed by a different world-renowned, European architect, each of whom took inspiration from traditional Korean and minimalist styles.

Samsung runs several other buildings outside of the capital that are also worth a look. Some of the sights oddly resemble giant handsets and televisions.

If you’re a Galaxy fan, also check out the company headquarters known as “Samsung Town” in Gangnam. Yes, that’s the hip nouveau riche neighborhood of “Gangnam Style” fame. Samsung’s three high-rises are modeled after puzzle blocks — a nod to the complex “puzzles” of the world that the corporation seeks to solve.

Designed by a Dutch architecture firm, the recently opened GT Tower East is quickly becoming one of Seoul’s most iconic and recognizable high-rises. The architects managed to do away with the blockish styles that dominate Seoul, putting forward a shiny exterior that consists of 48-meter glass waves.

It looks like a design of the future, and it might truly be so, say experts. The installation is remarkably sustainable, with a highly efficient energy plan that draws on solar panels and allows for all sorts of uses over time.

In central Seoul, travelers often remark that the headquarters of SK Telecom, South Korea’s largest mobile carrier, is a real eye-catcher. Like the architecture of Samsung, this structure is meant to resemble, yes, a colossal mobile phone. The high-rise has a tilted top, and its bright blue tint covers a jagged, mosaic-like display of glass on the exterior.

It may sound tacky, but the idea behind the structure doesn’t destroy its beauty. If anything, the SK headquarters, opened in 2003, blend well with this high-tech city.

If you want to experience South Korea’s struggle between history and modernity, look no further than this village of traditional houses right in the heart of Seoul.

A hanok is an old-style house made of timber, soil and rock. From the 1960s to the present, Seoul was built hastily from the rubble of the Korean war. The country, once poor and war-torn, sought an economic miracle, a path that meant bulldozing all sorts of charming antique neighborhoods for giant, cookie-cutter apartment complexes.

Recently, the city has witnessed a revival of interest in the hanok, with more proprietors calling for a smarter system of re-development that doesn’t involve bulldozers. The homes, after all, are energy friendly — making them a great option for a city that gobbles up plenty of it.

The village of Bukcheon, once a poor ghetto, has become an epicenter of this renaissance, where affluent residents have been buying up and gentrifying the houses with modern bathrooms and kitchens. It’s all part of broader attempts at restoration work around Seoul, explains Cho, the architect.

Forget the phallic hubris of the modern skyscraper. This massive tower, to be constructed near South Korea’s Incheon airport to the west of Seoul, may be the world’s most timid tower. It is still in the planning stages, but if the blueprint comes to fruition, it’ll be so cutting-edge that you might never notice it.

Designed by the American firm GDS Architects, the Tower Infinity, due for completion in 2014, is what many are calling Seoul’s “anti-tower": a structure that, from ground level, is nearly invisible. The gadgetry? Its exterior is armed with cameras that record the scene behind it, and then project it on rows of LED displays to the front.

In other words, onlookers will see the landscape that would otherwise be blocked out. For tourists, the tower is slated to get its own theme park and observation deck. Keep your eyes peeled, or else you might miss this one.