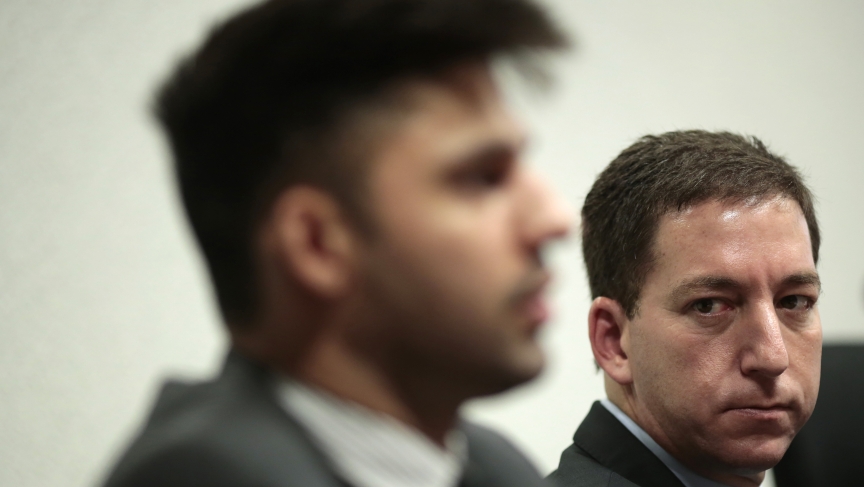 Glenn Greenwald, right, the American journalist who first published the documents leaked by former NSA contractor Edward Snowden, looks on while sitting beside partner David Miranda as he testifies in front of the Brazilian Federal Senate's Parliamentary Inquiry Committee.

London's Guardian newspaper said at the end of 2013 that they'd only published one percent of the classified NSA documents Edward Snowden leaked. There are likely a lot more to come.

Friday, the Washington Post published an article based on another set of Snowden revelations. Just a couple of days ago, The New York Times published an editorial calling for clemency for Snowden.

That one even surprised Glenn Greenwald. He was one of two Guardian journalists who first received Snowden's trove of NSA documents seven months ago in Hong Kong.

"This not only was enthusiastic of what Edward Snowden did, but a very well-constructed and thoughtful argument about why it is he shouldn't face criminal charges," he says.

Just having the New York Times publish such an editorial could change the way people talk about spying and Snowden.

"It's definitely significant," he says. "The New York Times, for whatever flaws it has, and there are many, still is far and away the most influential newspaper, the most important newspaper in the United States when it comes to shaping public discourse, in particularly the views of political and media elite. They also tend to define mainstream thoughts. So if The New York Times editorially takes a position, it's very difficult to dismiss that position as fringe or radical or extremist or anything like that."

Greenwald thinks it's a vindication of both what Snowden did, and of the work various journalists did to publish revelations contained in the documents. He still speaks with Snowden regularly. Greenwald is now an investigative journalist for the new media venture from Pierre Omidyar First Look Media, based in Rio de Janeiro.

Greenwald says when he and Snowden talk, it's often about the reactions to their work, and how their lives have changed since they first published. The reactions, he says, have not been what they expected.

"When we were in Hong Kong, we all talked about what were going to be the likely consequences for each of us," he says. "We assumed that [Snowden] was going to end up in US custody sooner rather than later and probably facing charges that could put him in a prison cell for several decades. Laura and I talked about how, as journalists, we would be targeted in various ways as well. But actually, I think the prevailing sentiment among the three of us is that things have gone wildly better than we ever anticipated that it would."

It's not all roses, to be sure. He describes his day-to-day life in one word: intense. He's been at the center of a media storm. It's put stress on his relationships — the British government detained his partner under obscure anti-terrorism laws. Every word he writes and says is scrutinized. It's created a lot of pressure.

"At the same time, when you go into journalism, the thing you hope to be able to do is to work on a story like this one," he says.

So it's worth it, even if he's still unsure he'll ever return to the United States. He's staying in Brazil for the time being.