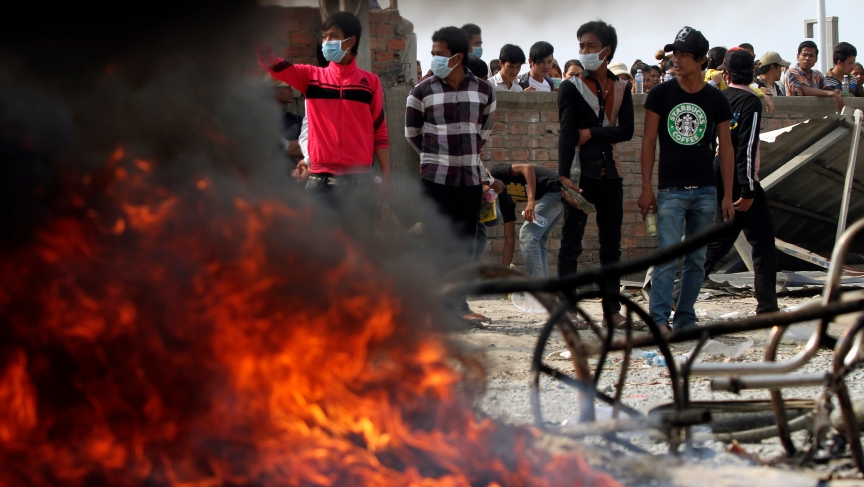 Garment workers hold Molotov cocktails after clashes broke out during a protest in Phnom Penh on January 3, 2014.

Cambodian police opened fire on garment workers protesting in the capital Phnom Penh on Friday, killing at least three people. The workers were part of a national strike to demand higher wages.

A police spokesman said officers intervened after nine policemen were injured by stones and slingshots.

Part of the city looked like it was transformed into a battle zone, with crowds of young people hurling rocks and Molotov cocktails at armed riot police.

Photographer John Vink captured some of the scenes of violence. "Several were severely injured by hundreds of bullets fired by armed forces," he said. "Several others were arrested and subsequently tasered, beaten up or beaten unconscious."

These violent clashes "were a long time coming," said Kate O'Keeffe of the Wall Street Journal.

"Garment industry workers have for a while been working with very low salaries," O'Keeffe said. "These most recent protests were really sparked by the government's offer of a very disappointing minimum wage on Christmas eve."

Textile workers were demanding that their monthly minimum salary be raised to $160 per month, about double the current rate. O'Keeffe said they must have been outraged when they were given a final offer of $100 per month.

"There is a strong political element to all this as well," O'Keeffe added.

Cambodian Prime Minister Hun Sen has ruled the country for decades. Pressure is building for him to step down, and the political opposition has aligned itself with garment workers' unions. "It's not just about preserving the garment industry," O'Keeffe said.

According to Reuters, the clashes took place in part of Phnom Penh that is also, "home to dozens of factories that make clothing for western brands that include Adidas, Puma and H&M, Hennes & Mauritz."

The Cambodian government says it is offering a fair wage to garment workers and trying to protect an industry that is vital to the national economy.