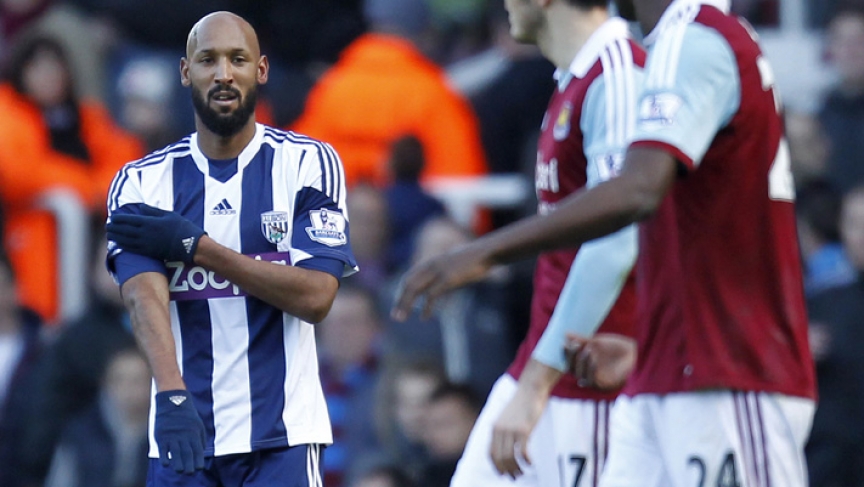 Racial abuse on the soccer field has been happening frequently in Europe in recent years. Now another controversy has surfaced, after a player in England's high-profile soccer Premier League celebrated scoring a goal with an arm salute. The alleged meaning of the gesture is what has a lot of people concerned.

I was watching the Premier League match in question on TV, when I saw player Nicolas Anelka, a French national who plays in England, score his goal and celebrate in a seemingly low-key manner.  He pointed his right arm down and brought his other hand across the chest to touch his shoulder.  I thought it was a weird celebration, but nothing more.

I didn't give it any more thought until later that day, when I saw the explosion of controversy over the gesture.

This downward, staright-arm salute (it's called 'la quenelle") was invented by French comedian, Dieudonné.  He claims it's an anti-establishment gesture, a sort of finger in the eye of the powers that be in France.

But it has a whole different connotation as well.

Dieudonné is a controversial figure in France. He's been convicted of anti-semitic hate speech several times and the gesture itself has been picked up by far-right groups and neo-Nazi groups.  Some of their members are posting pictures online of themselves doing the gesture in front of Jewish temples and schools.

In his defense, Anelka has said that he is Dieudonné's friend and was just expressing his support for the comedian.  But there's not a lot of people who believe him.  The Football Association in England has opened an investigation, and Anelka could be suspended for several games if found guilty of discriminatory behavior. In the meantime, Anelka has promised not to do it again.

But the controversy doesn't end there.  Next thing you know, it's spread to the US via French NBA star Tony Parker.  A picture of Parker has now surfaced, showing the San Antonio Spurs player with comedian Dieudonné as both men perform the controversial gesture.

Parker was immediately asked by the Jewish groups here in the US to explain.  He issued a statement saying the picture was taken 3 years ago, and that at the time he thought the gesture was just part of Dieudonné's comedy act.  He claims he had no idea of all the connotations around it.  Parker also apologized and promised never do it again.

But all of this in not happening just out of the blue.

Turns out Dieudonné has been in the spotlight recently, after he gave a very controversial interview in which he used the words "gas chambers" when he was talking about a Jewish broadcast journalist.  After that comment, the French government said it was looking into the possibilty of banning Dieudonné from performing, arguing that Dieudonné is no longer just a comedian.