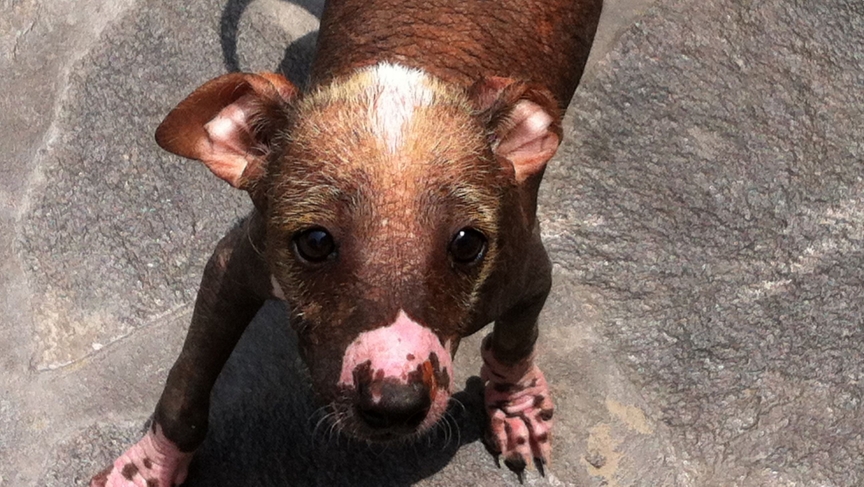 A Peruvian hairless dog at Alfredo Janneau's kennel in Lima.

Each day, Munay and Kuny wander through the Huaca Pucllana ruins in Lima. They act like a lot of dogs.

They roll in the dirt. They walk wherever they want, even through an excavation. They pee on stuff. Then around noon, they head over to the fancy on-site restaurant, where the cooks have set aside food for them. Usually, it’s chicken, lightly seasoned and sautéed.

Munay and Kuny are Peruvian hairless dogs; the breed has been declared part of Peru’s cultural patrimony. That’s why these dogs live here and get treated so well.

These hairless dogs have been in Peru for thousands of years. But just a few decades ago, they were in danger of dying out. Then a local breeder launched a campaign that made them popular again.

Munay and Kuny aren’t exactly noble-looking representatives of this breed. Today, they’re covered in dirt; and they have almost no hair, other than the scraggly Mohawks that make them look like aging punk rockers.

A Dutch tourist named Stefan, who is touring the site with his girlfriend, doesn’t seem too impressed with the dogs.

A few decades ago, that’s what a lot of Peruvians thought, too. The fact that the dogs are popular now is largely because of dog expert named Ermanno Maniero. He spent years working to get them recognized as a breed.

Maniero, who was born in Italy, says he first saw the hairless dogs as a kid, during road trips around Peru with his parents.

“We could see that these dogs were really looked down on. They were always wandering around the town squares, and we thought they were sick. But we asked around and learned that they were just hairless dogs. And one day, someone told me that they were an ancient breed.”

Maniero visited a Peruvian museum where he saw the dogs depicted on ceramics and realized that they’d been around for centuries.

“The dogs were buried in their own space. They were wrapped in textiles and they had a bit of fish put on top of the snout, as a way to send them to the other life with covering and food.”

Guillen says that the dogs have been a part of life in Peru since before even the Inca Empire.

Today, many Peruvians believe that hairless dogs have magical properties; that hugging or tucking in with them at night can relieve asthma and assorted pains. Even Maniero says it’s a good idea to snuggle up with one if you’re sick.

“Instead of using a hot water bottle, what could be better than using a living creature to raise your temperature?”

It’s just one of the many “benefits” that Alfredo Janneau, who breeds the hairless dogs, plays up when showing me the dogs at his kennel.

My favorite is a three-month old puppy about the size of a housecat, with coppery skin, pinkish-white spots, and fine golden hair on its face. The puppy’s skin does feel sort of like a hot water bottle, one that’s covered in thin velvet.

“They don’t get fleas, they don’t have allergy issues, and above all, they don’t bark – at least not the ones that I sell.”

These dogs can cost much more abroad.

The thing is, though, I already have one, named Piji. He’s charcoal-colored and built like a greyhound, with huge floppy ears. My boyfriend got him as a puppy, for free, from some friends. But these dogs don’t like extremes. We’re already wondering how he’ll deal with New England winters when we go back to the US.

“There are a ton of these dogs in Russia and other cold places,” he says. “People really love them there. They just bundle them up.”

But first we’ll have to see if we can even get the dog on a plane again. The last time we traveled with Piji, customs officials threatened to fine us for taking “cultural patrimony” out of Peru.