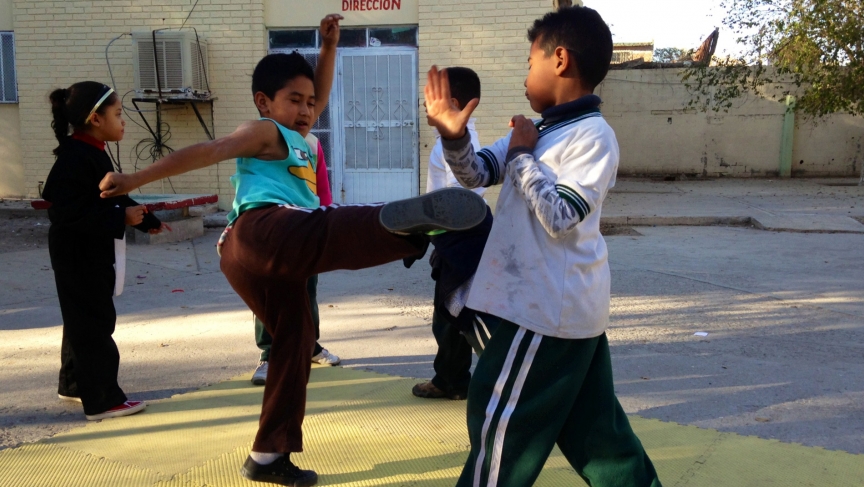 Children practice tae kwon do at an after school program in Cuidad Juárez, funded by the Merida Initiative.

Here's something you don't see every day: a backyard welding shop staffed by a husband, his wife and their two college-aged kids.

"The day starts with me cutting the material over here,” says Sonia Chavez, an impressive 20 year-old. She handles an electric saw like a butter knife. The slender steel/iron beams she slices will become window frames and storm doors. "I cut the materials, then my mom and my dad assemble it. And when it's all done, my brother paints and then we go deliver the stuff."

A series of micro loans made this business possible. The extra cash helped the Chavez family build a roof over their outdoor workshop and invest in better machinery that cut their electric bill in half. The business, in turn, helped keep Sonia and her brother off the streets during the worst years of drug violence.

The local non-profit that finances these loans receives money from the US government through the Merida Initiative — a $1.9 billion dollar aid package between the US, Mexico and Central America. One of their goals is to counteract organized crime with economic opportunity.

The Chavez family had few options to grow their business. They live in a neighborhood run by an informal economy and the black market. So a commercial bank would have likely dismissed them as too risky. Sonia's father, Jose Chavez, says the micro loans made all the difference.

"We are very united because of the work — you know, so we can stay one step ahead," he says.

The Merida Initiative's most high profile mission is to combat drug trafficking. The US has sent Black Hawk helicopters and drug sniffing dogs to aid Mexican police and military. The money also goes to support judicial reform and modernize infrastructure at the border.

But a tiny fraction of their budget, $35 million, goes toward social welfare programs in three key cities: Juárez, Tijuana and Monterrey.

At a cell phone store in Juárez, store manager Osvaldo Velez shows off ring tones. Three years ago he had given up on Mexico. He lost his factory job and his uncle was murdered. So Velez fled to Dallas on a tourist visa and worked illegally remodeling homes. After two years, he got homesick and returned to Juárez where he stumbled into a leadership workshop for young people in high-crime neighborhoods.

“I regained my confidence and belief that I could succeed,” he says.

As a store manager, Velez doubled the salary he made as a factory worker. Now 26, he's considering going back to school. The leadership workshop he attended receives Merida money. And a 2013 evaluation by the US Agency for International Development (USAID) found that 70 percent of the workshop participants were either employed or in school less than a year later.

But in the US, the Merida Initiative remains controversial.

"When I look at what the Merida Initiative is trying to accomplish on counter drug efforts, I don't think it has been successful," says David Shirk a fellow at the Mexico Institute with the Woodrow Wilson Center. While Merida has shown some success in places like Juárez, he says, it's failed on one of its primary goals: reducing the availability of illegal drugs in the US.

“If you look at any of the measures on drug use, on supply, availability — there hasn't been a huge shift. If anything, it's gotten worse," he adds.

"The United States and Mexico really have come to a place where they recognize that there are mutual gains to be made in this kind of cooperation," he says.

Five years in, most of the original Merida money has been spent. It's now up to Congress to decide whether it is a program worth continuing.