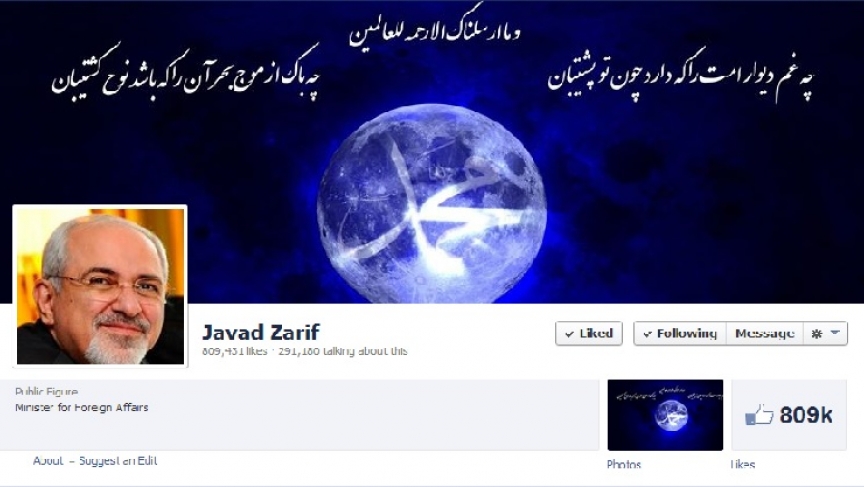 Iran is a country of many contradictions. You have have heard that before.

Unrelated men and women aren't allowed to mingle freely, yet they find a way to do so. Women are required to cover their hair, but many cover it in a way that becomes a fashion statement. There are many others.

Here's another contradiction: Iranian officials — including the President Hassan Rouhani and foreign minister Javad Zarif — are frequent users of social media. Yet Iranian citizens are officially banned from signing up.

“Iran is a country of two worlds in many ways. These government officials, the president and the foreign minister are using these social networking sites to reach out to people, but their audience are not allowed to use those social networking websites. So it sends a very bad message, both to people inside the country and outside how the values are different for government officials and for ordinary people," says Nazila Fathi, former Tehran correspondent for the New York Times. She has researched Iranian social media and is currently writing a book about Iran.

Fathi says that these officials have found social media to be a way to express themselves, without having to go through the more difficult, conservative media, such as state TV or newspapers. It’s a platform to get their message out directly and instantly.

And that has provided a somewhat intimate look inside the worlds of these leaders. That’s a rarity in Iranian politics.

Here’s one post Iranian foreign minister Javad Zarif wrote on his Facebook page in November, when the nuclear talks between Iran and the West were under way.

“Hello friends, It’s Friday 1 pm Geneva time (3:30 Iran time). We had 6 hours of intensive talks with Lady Ashton and other members of the delegation. The negotiations are going well, but some issues still remain to be resolved. Please keep us in your prayers. Goodbye.”

Zarif posted several of these behind-the-scene anecdotes about the Geneva talks. His posts read more like a personal diary, with photos and even cartoons to accompany them.

“Zarif is showing a very human face on his Facebook page," Fathi says. "For instance, just recently his mother passed away and he wrote about the pain of losing his mother. And these are things that bring an official closer to the people."

"Their posts on Facebook are in Farsi, targeting Persian-speaking users, while on Twitter they tend to post more in English, hoping to reach out to a more global audience," Fathi says.

She also adds that these officials have been able to use social media to distance themselves from the more conservative and hostile tone of the previous administration. But while officials might have a more convenient and easy way to engage with the public, the opposite is true as well: users can comment on their posts and express opinions.

Hassan Rouhani: @Jack. AS I told @camanpour, my efforts geared 2 ensure my ppl’ll comfortably b able 2 access all info globally as is their #right.

To which Dorsey replied: “Please let us know how we can help make it reality.”

Meanwhile, there has been a push in Iran to lift the ban on social media. In one program aired on state TV, an expert argued that social media platforms are great ways to access information and by banning them, Iranians are missing out.

There's also been pressure from outside. ASL 19, a Toronto-based research lab, helps Iranians get around Internet filtering. Their name comes from article 19 of the Universal Declaration of Human rights, which reads:

"Everyone has the right to freedom of opinion and expression; this right includes freedom to hold opinions without interference and to seek, receive and impart information and ideas through any media and regardless of frontiers."

Ali Bangi is a director for the group.

"When it comes to social media there is this problem that Iranian government officials use these platforms while ordinary Iranians can not," he says. "I follow many hashtags and people are really ... upset. If you follow #filternet, filtering, #condnet [cond means "slow" in Farsi], people are expressing their opinion and dissatisfaction by the administration, Rouhani’s administration," he adds.

Bangi points out that the Supreme Leader himself has long been active on the Internet. He has a blog, Facebook and Twitter accounts, and they’re updated regularly.

Even though Iranians can’t access these sites directly, there are ways to get around the ban. They can use proxies or Virtual Private Networks, VPNs.

“People are basically ignoring the law and they use circumvention tools. They break the rules and they gain access to social media and I think this is pretty much what the Rouhani’s administration is doing right now. They, like any other people, use social media as well and they are ignoring the rules. The Supreme Leader does the same too,” Bangi says.

So far, the push for change in Internet filtering hasn't resulted in any breakthrough. At least the government doesn't seem to be listening, rather just tweeting. Another contradiction.