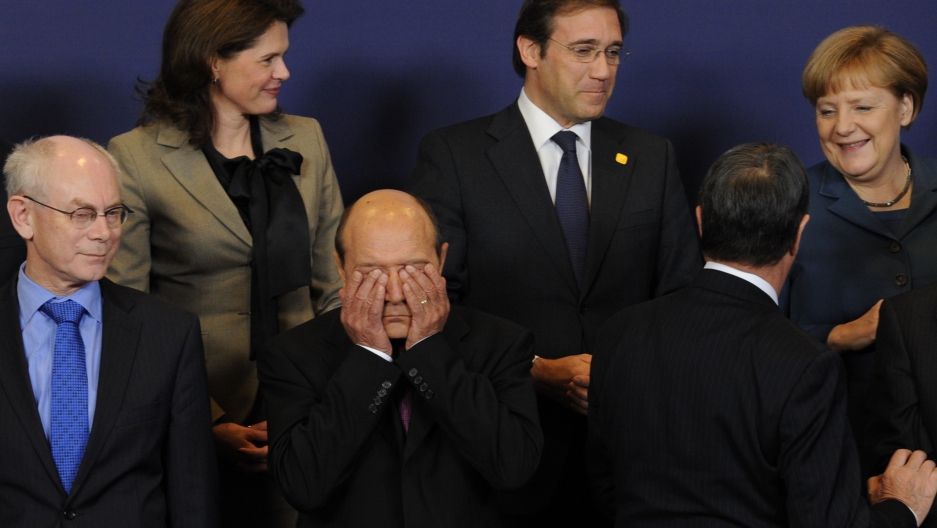 BRUSSELS, Belgium — After five years of economic headlines dominating Europe, politics could be back in 2014.

The states of southern Europe will be hoping their fragile signs of recovery after years of recession will firm up in 2014, but no one’s expecting the political radicalism the economic crisis has generated to fade away.

Most attention will focus on elections to the European Parliament in May.

Once maligned as a toothless talking shop, the European Union’s assembly now has wide powers to shape and reject legislation affecting the EU’s 500 million citizens.

But although around 70 percent of new laws in the bloc’s 28 nations originate from EU headquarters, the European Parliament has failed to ignite public enthusiasm: Barely 30 percent of the electorate usually turns out to vote.

This year could be different, with polls showing voters determined to use the elections to the legislature’s 751 seats for registering protest over the way the political mainstream has handled the economic crisis.

Far-right parties are expected to emerge as the biggest political forces in France, Austria and the Netherlands. Euro-skeptics will probably gain strength in Britain and Poland. And parties with clear neo-Nazi tendencies could enter the parliament from Greece and Hungary.

Meanwhile, the radical left may do well in Spain and Portugal and an anti-establishment party led by a comedian is hoping to elect Italy’s largest contingent to the Brussels-based assembly.

Fortunately for the mainstream, the array of new parties from the political fringe is sufficiently divided to ensure it won’t form a coherent bloc, meaning the parliament won’t be able to do much more than provide a noisily disruptive side show to the EU legislative process.

Their influence could begin running deeper, however, as traditional parties spooked by the rise of the radicals start to co-opt their policies.

Concern over the poll showings of the United Kingdom Independence Party and the Freedom Party in the Netherlands is also seeing conservative-led coalition governments in both countries taking tougher lines on issues such as immigration and further European integration. Expect to see more of the same in 2014.

The European Parliament election will have a direct impact on the selection later next year of a new executive team to run the EU.

The latest EU treaty rules give the parliament an increased say over who will succeed Jose Manuel Barroso as president of the European Commission, which initiates EU laws, defines policy and runs the union’s day-to-day business.

Traditionally, the appointment of the EU’s top job was determined by secretive horse-trading among Europe’s presidents and prime ministers. This time, parliament aims to flex its muscles to ensure the new EU chief executive comes from the political group that gets most votes in the parliament.

The Brussels rumor mill currently has a German Social Democrat — Martin Schultz, the parliament’s current speaker — as the front runner to succeed Barroso.

Other names include Jean-Claude Juncker, until recently prime minister of Luxembourg, outgoing EU financial commissioner Olli Rehn from Finland, Irish Premier Enda Kenny and Lithuanian President Dalia Grybauskaite, an outsider favored by those who say it’s time for a woman and an Eastern European get the job.

The commission presidency is only one of a series of senior posts up for grabs in Brussels in 2014. Herman Van Rompuy is due to step down as president of the European Council — the official who sets the agenda and chairs EU summits — Catherine Ashton will no longer be EU foreign policy chief, and Anders Fogh Rasmussen will reach the end of his term as NATO secretary general.

So there are plenty of career opportunities for European politicians aspiring to high international office.

While 2013 was bookended by elections in Italy and a vote in Germany leading to the formation of a new “grand coalition” of center-left and center-right under Chancellor Angela Merkel, so far there are no government-changing elections scheduled in any of the EU’s larger countries next year.

But there could be a couple of votes that reshape Europe.

In September, the people of Scotland will vote in a referendum to break away from the United Kingdom, potentially ending the union that has existed since 1707.

Catalonia is hoping to follow with a November vote on independence from Spain, although the regional government will first have to overcome resistance from Madrid against holding the referendum.

Other regions from Flanders in Belgium to Spain’s Basque Country and northern Italy will be watching the results with interest.

On the economic front, France, Italy and Spain will be hoping tiny increases in growth and drops in unemployment in the latter half of 2014 will signal a more sustained return to economic recovery.

More from GlobalPost: The man who wasn’t there

Although no one is predicting a sudden flush of euro zone health, there will be relief if that trio of troubled big economies remains on a path toward gradual improvement.

Even modest economic growth could give a boost to French President Francois Hollande, whose popularity ratings have fallen to record lows.

Spanish politics will likely be dominated by the Catalan referendum debate.

In Italy, Prime Minister Enrico Letta will focus on building support for a new electoral law designed to produce stable majority governments. Of course, Silvio Berlusoni will remain in the limelight as he seeks to bounce back from a year that saw him convicted on criminal charges, thrown out of the Senate and rejected by senior members of his own party.

The euro zone will get a boost on Jan. 1 with a new member, Latvia, taking its membership to 18.

Also on New Year’s day, Greece will take over the EU’s rotating presidency for the first six months of 2014. Hardest hit by the economic crisis, Athens will be hoping its stint at the helm will also coincide with waking up from its five-year economic nightmare.