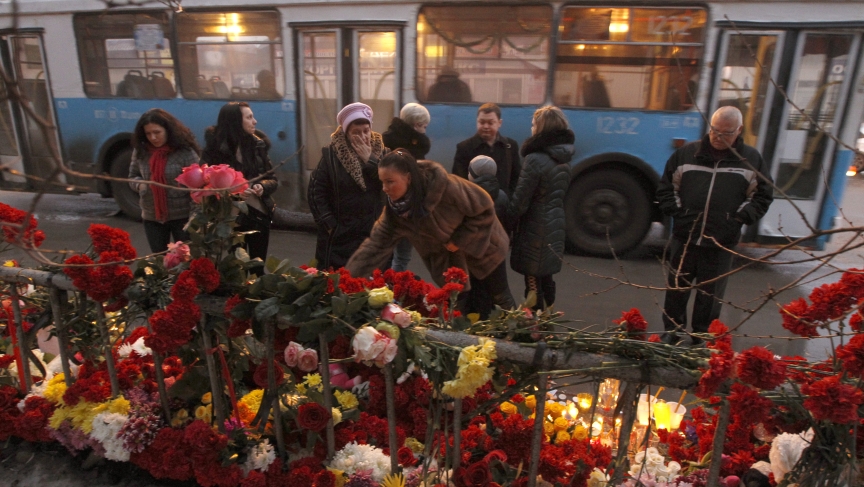 People gather at the site of an explosion on a trolley bus in Volgograd, December 31, 2013.

It's still unclear who was behind the two recent suicide bombings in the southern Russian city of Volgograd, but Russian officials have suggested that Sunday's suicide bomber was a woman.

And there are indications the attacks have to do with a long-simmering ethnic conflict in Chechnya and Dagestan. It isn't rare to find women deployed as suicide bombers in those areas. They even have a name: "black widows."

Women became involved in the conflict in many of the same ways the men did, says Mia Bloom. She's a professor of Security Studies at the University of Massachusetts, Lowell, and author of "Bombshell: Women in Terrorism."

According to Bloom, the first reported female suicide bomber in the North Caucaus conflict was Khava Barayeva who targeted the Russian soldier who allegedly killed her husband.

"I think this is where the term was coined black widow," Bloom said. But not every female suicide bomber has been a widow, she said. And the term itself has become controversial.

"I think it's one way in which the Russians were able to downgrade the conflict by making it appear that it was a visceral reaction by women in mourning," Bloom said. "But in fact there was a whole political organization behind it."

In researching her book, Bloom met and interviewed many women involved in terrorist movements around the world, including Chechen women in the diaspora.

"For them, the motivations for women are not necessarily different than those for men. It's about getting the Russians out," she said.

But it's that assumption, that woman are somehow different and more peaceful than men, according to Bloom, that makes a female suicide bomber headline news. And that attention is something Bloom said terrorist organizations are banking on.

"The idea that women don't engage in violence, I think, is one of the things that terrorist groups hope we continue to believe so it does have that shock value," she added.