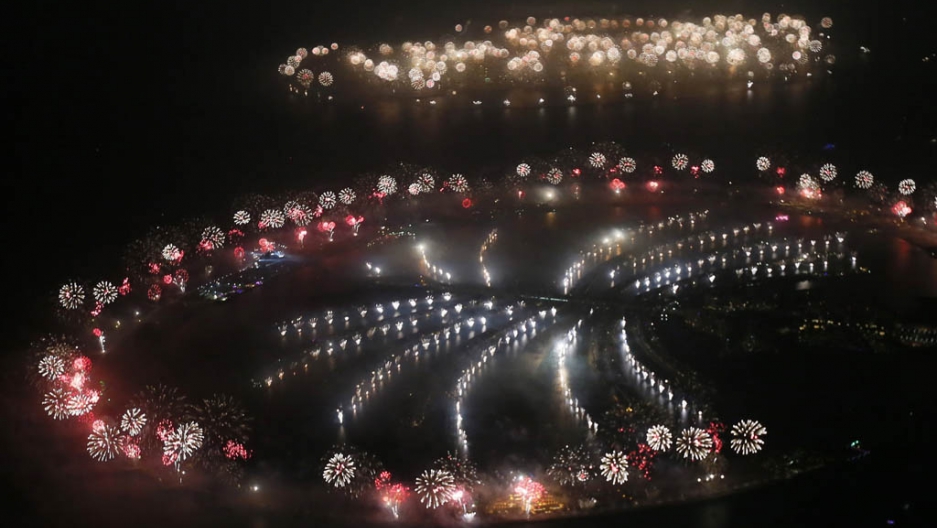 Fireworks explode over Palm Jumeirah in Dubai on January 1, 2014 to celebrate the new year. The glittering fireworks display that lasted around six minutes spanned over 100 kilometers (60 miles) of the Dubai coast, which boasts an archipelago of man-made islands and the Burj Khalifa, the world's tallest tower.
Credit: Karim Sahib
Share

Dubai's futuristic skyline was lit up on Tuesday night during a fireworks display - possibly the largest in history - that left spectators in the city and around the world dazzled.

The city exploded 400,000 pyrotechnics in what could break the Guinness world record for largest fireworks show ever.

The six-minute show saw fireworks climb the world's tallest building, the 2,700-foot Burj Khalifa, and then along the city's 60-mile coastline and surrounding islands.

The real show, however, was at the largest man-made island in the world, the Palm Jumeirah, where the biggest display was seen.

The fireworks display was organized by IMG Artists, an events management company based in the US, which has already put on major pyrotechnics shows in Dubai.

The show was also live-streamed on YouTube and on Dubai Media's website but a crush of traffic meant that many could not watch.

Dubai is looking to beat the fireworks record set by Kuwait in 2011. That year Kuwait used 77,282 fireworks during an epic hour-long celebration.

But at nearly half a million pyrotechics it looks like Dubai will once again reign supreme as the capital of excessive extravagance.