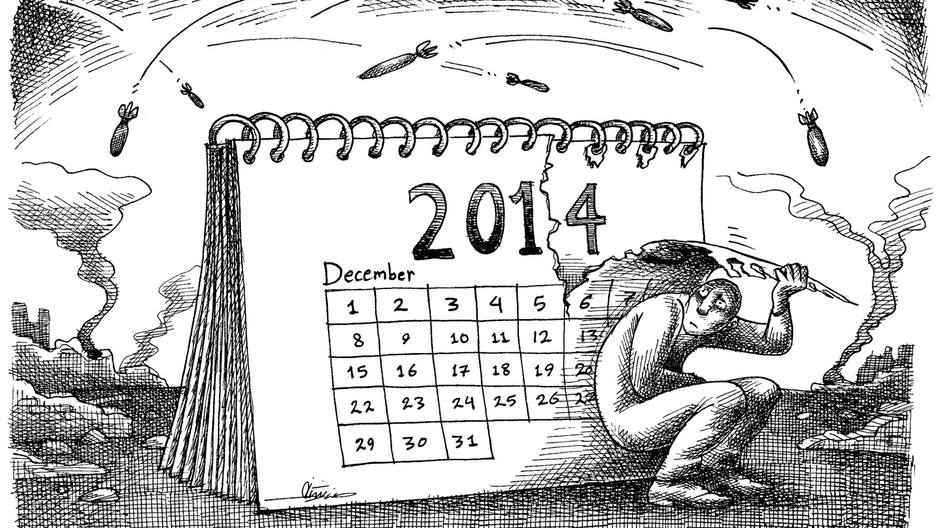 There's not much reason to celebrate as the New Year arrives in Syria.

The run-up to the Iraq War was controversial, with US President George W. Bush lobbying various nations to get involved.

Ultimately, he created what was dubbed the "coalition of the willing" — which was mostly the US and the United Kingdom and a handful of smaller nations. The UK's participation has been controversial and the subject of an official inquiry.

Now, according to The Independent, the UK is poised to release official notes on the deliberation that led to the UK's participation. Among the documents to be released are notes between Bush and UK Prime Minister Tony Blair, as well as notes of cabinet meetings where UK participation was debated. The extensive effort to declassify many of these documents is expected to conclude in the next few months.

There's more than one way to tell a story

It's the end of the year and journalism outfits are putting together all kinds of lists. Over at The New York Times, they've compiled a list of their multimedia, interactive and explanatory stories, illustrating in a stunning way the number of different ways there are to tell a story: From the popular interactive that helped people determine where they talk like they're from to a graphic that illustrates how conference realignment has upended the world of college sports. The whole package features dozens of examples of great stories.

If you're feeling a little bit stressed out, you might try Zen Buddhism. That's the popular choice for residents of Lima, where Peru's booming economy has people feeling just a little frazzled. The oldest Buddhist temple in South America is just outside Lima, in a town called Cañete. Peru has a large Japanese population that brought the Buddhist tradition with them, but these days, most of the people visiting Buddhist shrines aren't connected to Japan at all.

Is this a Chinese stealth bomber?

Foreign Policy has a photo that has been circulating in China, purportedly of a new long-range stealth bomber fielded by the Chinese military. The plane bears a great deal of resemblance to the US B-2 stealth bomber. Without any scale, it's hard to tell if the photo is indeed a bomber or if it's a drone along the lines of the US Air Force's Sentinel. Questions have also been raised about the photo's veracity — whether it could be photoshopped. If it's real, it wouldn't be the first time news of Chinese military accomplishments has leaked online.

Scrap the icebreakers, we'll fly them out

The mission to rescue a Russian research vessel trapped off Antarctica has been called off because of complications, so officials are developing a new plan to rescue the crew. According to The Guardian, the new plan involves clearing a landing area on the ice near the ship and flying in a helicopter that can pick up the researchers. The rescue is on hold until the weather clears, but Chris Turney, a climate scientist at the University of New South Wales and a leader of the Australasian Antarctic Expedition, said they hope to be flying by Thursday. The Russian crew of the ship will be resupplied and remain on-board until stronger icebreakers arrive or the ship can free itself.

Women are cleared to fly

Ski jumping has been an exclusively men's event in the Winter Olympics since the beginning, in 1924. But this winter, in Sochi, women will be allowed to participate as well. It's been a long struggle to get the event opened up to women, even though women have been ski jumping recreationally for at least 100 years. PRI's The World tells the story of one of the event's biggest advocates — who just qualified as the first woman to represent the US in ski jumping.

The northern tier of North America is in the deep freeze. In Winnipeg, the capital of and largest city in Manitoba, it's so cold that United Airlines has canceled a dozen flights, according to Global News. It was -32 degrees Farhenheit over night and headed for a "high" of -22. Temperatures should warm up all the way to 17 above by Friday.