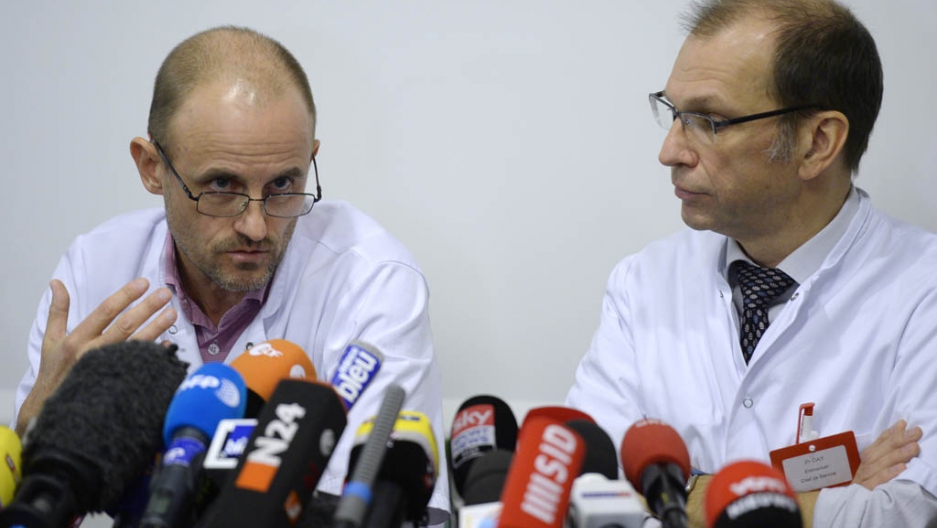 Neurosurgeon professor Jean-Francois Payen speaks next to neurosurgeon chief Emmanuel Gay during a press conference about Michael Schumacher's health condition on December 31, 2013 at the Centre Hospitalier Universitaire hospital in Grenoble, French Alps. Doctors treating Michael Schumacher said Tuesday the Formula One legend has undergone a second operation following his life-threatening ski accident but warned he is "not out of danger".
Credit: PHILIPPE DESMAZES
Share

Schumacher remains in critical condition at a hospital in Grenoble, France after hitting his head on a rock while skiing over the weekend.

The 44-year-old German national underwent surgery Monday night to stop internal bleeding that had put pressure on his brain.

"The situation is more under control than yesterday but we cannot say he is out of danger," head anaesthetician Jean-Francois Payen told a news conference at the CHU hospital.

"We have won some time but we must continue an hour-by-hour surveillance... It is premature to speculate on his condition," he said.

Schumacher remains in a coma after suffering contusions and lesions on his brain. He is being kept in therapeutic hypothermia, with his body temperature brought down to around 34 degrees Celsius (93 degrees Fahrenheit), while under the care of a brain and spinal injury expert.

Doctors said that the fact Schumacher was wearing a helmet probably saved his life. His condition, they said, was still too fragile to move him to a larger hospital.

Officials at the hospital said that it was too early to tell whether Schumacher's condition would improve in the coming days.

"We are a little less worried than yesterday but I'm sure you understand that the situation could change this evening or tomorrow," Payen said.

The retired seven-time Formula One winner lives in Switzerland with his family with whom he was skiing at the time of accident.